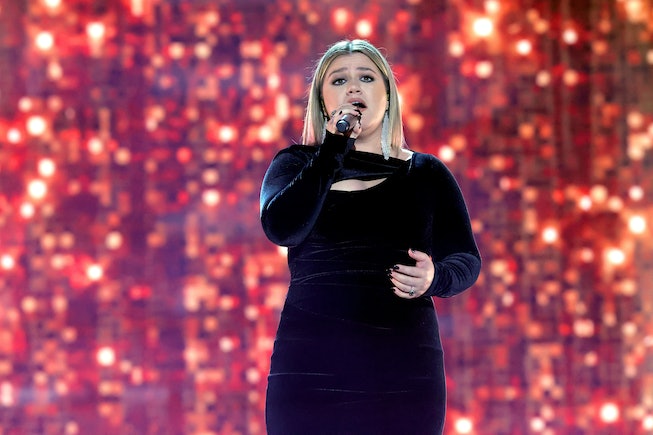 In an uptempo, soft rock rendition, Clarkson sang the iconic song that topped the Billboard 100 in 2008, in Britney’s Circus era — an underrated album, IMO, that also features the banger “If U Seek Amy.” “Celebrating Queen Britney,” the official The Kelly Clarkson Show account tweeted with a video of the full performance. Of course, Clarkson’s version has got nothing on Britney’s, but that’s not the point of a cover. We just love seeing a Y2K pop icon have a healthy reverence for the ultimate Y2K pop icon, and Clarkson’s snarling alto serves the psychological underpinnings of the song well.

We hate to inject drama into an otherwise sweet homage, but Clarkson’s cover comes a week after Spears made comments about a 2008 interview Clarkson gave, when Britney was publicly divorcing Kevin Federline. “Man, but wouldn’t it be funny if she’s just totally screwing with everyone?” Clarkson told the radio station Q100. Spears was placed under the conservatorship that same year. Last week, Britney posted on Instagram in response to the video: “‘I don’t forget’ … don’t you just wish she should say she’s kidding ??? Clarkson … in a world where bullying has been heartbreaking, I’ve had my share.” The post has since been deleted, but was preserved by a fan account.

Otherwise, Britney is on cloud nine, where she, more than anyone, deserves to be, after winning her long-fought conservatorship battle last year. The singer just married Sam Asghari in a superstar glam wedding, with A-list stars including Selena Gomez (who is prettier in person, Britney wrote on Instagram), Madonna (who Britney kissed again!), Paris Hilton, Drew Barrymore (who Britney called her ‘girl crush’ on Instagram), and Donatella Versace in attendance — the latter of which designed four different wedding outfits for Spears.

“The ceremony was a dream and the party was even better,” Spears wrote afterward on Instagram. “So many incredible people came to our wedding and I’m still in shock…I think we all fell on the dance floor at least 2 times! I mean come on … we were all VOGUING !!! @SamAsghari I LOVE YOU !!!”