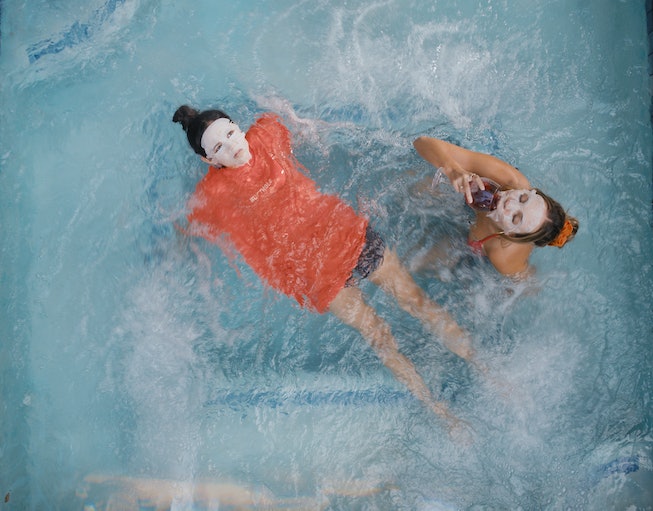 The Fallout is a generation-defining film for Gen Z. It’s heartbreaking that that means it’s about a school shooting – and moreover, the emotional trauma that comes from surviving one.

In The Fallout, two teenagers, played by Maddie Ziegler and scream queen Jenna Ortega, deal with the trauma of having survived a school shooting. With hands clasped over mouths to dampen the sounds of their sobs as they hide in the same bathroom stall furiously texting their parents, Ziegler and Ortega capture the horror that too many American teenagers have experienced in a country where school shootings are so common they don’t even all make national headlines.

“There are rarely any movies that are really good at showing the accuracy of our generation, Gen Z, and I feel like finally we got one made with this movie,” Ziegler tells NYLON. “I’m so happy that I get to bring this story to life.”

But the film is less about the incident itself and more about how you begin to heal after, especially when you’re at an age where all your feelings about everything feel confusing, which is why director Megan Park told Ziegler to watch The Florida Project and Eighth Grade to prepare for her audition. “A lot of those emotions you're feeling as a teen really hard to explain. They’re really confusing, you're trying to find yourself, and [Eighth Grade] was a perfect reference for this movie,” Ziegler says.

The film also marks the directorial debut of Park, who is best known for her role in The Secret Life of the American Teenager, the ABC Family show that ran a little too long that also graced us with Shailene Woodley, who plays a therapist in the film.

NYLON spoke with Ziegler about working with Jenna Ortega, how she prepared for such an emotionally intense role, and more.

The Fallout is streaming on HBO Max. Watch an exclusive clip of the making of the film, below.

How did you get involved in the film?

I got the audition and I immediately read the script and fell in love. I felt like this was just a powerful story and it impacted me so much and was like, “Oh my gosh, I would love to be a part of something so special and important.” I got on the phone with Megan before I came in for my audition and she was so cool and gave me some references before I came in to make me feel comfortable. I went in and read with her and a few weeks later, I got the call that I got the movie. It was the easiest, “yes” ever. I was like, “Yes, yes, yes, no questions, I’m all in.”

What were some of those references or inspiration she’d given you?

She gave the vibe of The Florida Project and Eighth Grade. Especially Eighth Grade, which shows the essence of what it's like to be awkward as a high schooler and a lot of those emotions you’re feeling as a teen are really hard to explain. They’re really confusing, you're trying to find yourself, and that was a perfect reference for this movie. There are rarely any movies that are really good at showing the accuracy of our generation, Gen Z, and I feel like finally we got one made with this movie. I’m so happy that I get to bring this story to life.

Were school shootings something you felt like you grew up in fear of? Do you feel like you carry that fear with you?

Totally. I was homeschooled, but I know the majority of people I grew up with who went to high school, it's such a fear every single day and it's something that even I fear from afar. It's so upsetting that this problem hasn't’ been resolved for years and still continues to happen. The thing we can do the most is try to bring awareness to it and for people who are watching this movie, especially people who are older, I hope they can see what it's like to be a high school student and the fear of what it's like to go into school every day. It’s so unpredictable and you never know and it's hard to protect yourself. My heart is with anyone who feels fear everyday going to school or with someone who's suffered this tragedy or loss. It’s extremely scary and it’s intense.

It’s obviously such an emotionally intense film. How did you prepare for that or work to put yourself in this really vulnerable place?

A lot of research. I looked up a lot of articles of tragedies that happened at other schools and also just really just put myself in Mia's shoes and tried to be as present as possible. When I started doing my scenes with Jenna, we instantly were kind of able to take each other to that spot and find this really intense depth within the characters and this unsettled feeling. Most importantly, this movie really shows how important healing is from trauma and how trauma bonds a lot of people whether that be from a tragedy like this or something completely unrelated. Everyone's feelings are valid and very much so you can see between my character and Jenna’s character that it’s okay to lean on someone and that’s where I found all the inspiration for my character and tried to take it there the best I could.

Tell me a little bit about what it was like working with Jenna.

She's' the coolest person ever, I genuinely love her so much. She has become one of my really close friends and I’m honored that I got to work with her. I was very nervous going into working with her just because I’m a fan of her work. She’s so experienced. She knows what the hell she’s doing and I was like, “Sh*t this is a lot, this is scary going into this and working alongside her,” but she made it so safe and fun for me to come into work every day. There was no intimidation. She really was like, “I’ll guide you and we’ll be there together.” It was really fun. Even though the material was heavy, offscreen we had such a good time.

What was it like to work with Megan Park?

I mean she’s such an incredible actor, which made it even more special to have a director who has acting in her back pocket. She really was the most understanding of us, having been in our position her whole life, so it’s so cool. She has that perspective; she was so collaborative and understanding of us as actor. I was so excited to pick her brain and see how she works and she is just the most special person. She’s genuinely one of my biggest inspirations and I can't believe I got to work with her and we both just want to work together forever because we absolutely love each other. This material, to be her first movie that she’s written and directed, I just continue to applaud her because she executed it really well.

What do you want people to take away from this movie?

I want people to take away the importance of knowing that it’s okay to not be alone and it’s okay to heal in your own time and most importantly: Life is insane and obviously at some point we have to move on from whatever we're going through, but it is okay to not be alone in that situation. I think people, especially teenagers who watch this movie, it really shows self-discovery and finding love and finding yourself and I think that’s all really relevant to our generation and I hope that people find that super relatable.