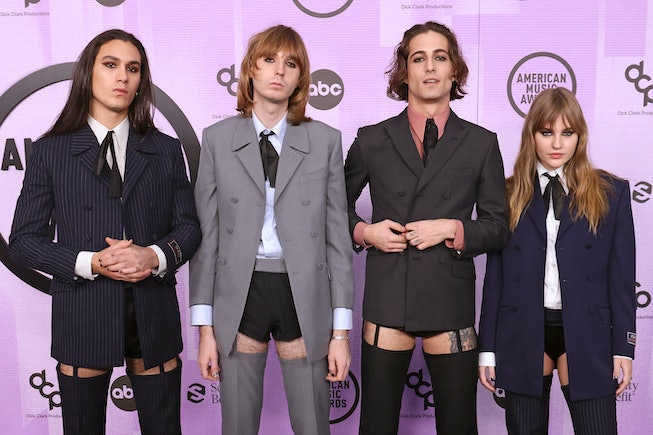 The beautiful thing about covers is the artistic clash of two people we love; a way for an artist to pay tribute to another artist in the most reliable form of flattery: mimicry! Not only is it the sincerest form of flattery, but bands who cover popular artists make headlines: Just ask Olivia Rodrigo, whose tour was earmarked by a slew of headlines about her covering no less than a dozen songs from artists like Avril Lavigne and Natalie Imbruglia.

Now, Måneskin, the hot Italian rock band who has been steadily dominating since winning the 2021 Eurovision competition with their song “Zitti E Buoni,” is on their inaugural world tour, and they’re wasting no time in paying tribute to the artists that shaped them — which includes Lana Del Rey. Can we blame them?

Fans at Måneskin’s New York City shows at Hammerstein Ballroom over the weekend were treated to a cover of Lana Del Rey’s “Blue Jeans.” The band played the quintessential 2012 banger alongside covers of The Stooges' "I Wanna Be Your Dog," The Four Tops' "Beggin'", and The Who's "My Generation.”

“We’re in New York, and this city has been the house of some of the biggest artists in music history,” the group told the audience, in a video captured by an audience member, before launching into an intensely sultry alto version of the Born to Die ballad. “There’s one in particular that we want to homage tonight ’cause she made possible to make masterpieces in the 2000s, so thank you, Lana.”

Måneskin’s tour kicked off in Seattle in October Next up, they’ll play in Washington, Atlanta, Miami, Houston and Dallas, before wrapping up the run in Las Vegas.

Both Måneskin and Del Rey both have albums in the works. Måneskin will release their new album RUSH! on 20 January 2023, which was heavily influenced by Radiohead. Del Rey announced today that she’s releasing her ninth studio album Did You know that there’s a tunnel under Ocean Blvd on March 23, 2023. Though Måneskin won’t be featured on this album (although our fingers are crossed for a future collab...), artists like Jon Batiste, Bleachers, Father John Misty, Judah Smith, Tommy Genesis, & SYML will be featured on songs.

You can watch Måneskin’s live cover of “Blue Jeans” below: