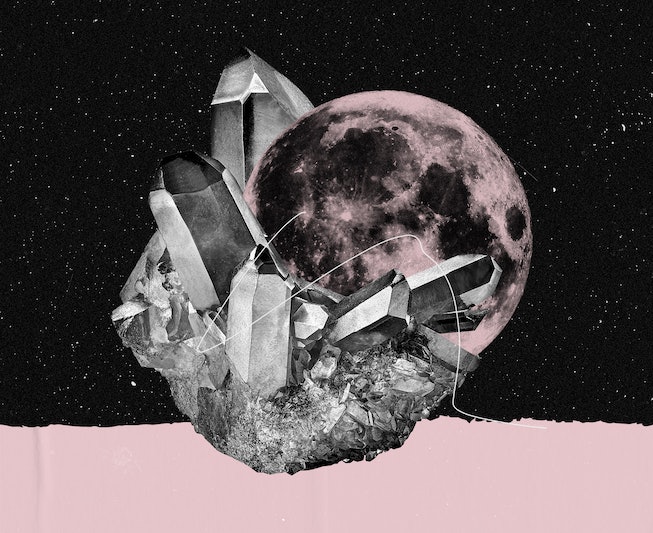 2021 was a jagged year, marked by epochal social change, new and often unfulfilled possibilities for public health and hard reconciliations of the personal with the political. Naturally, the severe changes this year correspond to the order of the cosmos. In the globally-dedicated sign Aquarius, Jupiter and Saturn, the planets of expansion and structure, worked to disseminate vaccines, knowledge, and new technologies to the masses. Sounds simple enough! But eclipses on the Gemini-Sagittarius spectrum put every personal choice through Ren & Stimpy fever goggles; morals, politics and “personal freedoms” bled into one another when nobody asked them to. And as Saturn worked for the collective in Aquarius, it squared, or challenged, the chaos-bringer Uranus in Taurus, bringing to the fore epic power clashes, in the form of new currencies, unions, and cultures.

2022 keeps its eye on worth and money, with earth-sign retrogrades and eclipses on the Taurus-Scorpio spectrum. In the ruins of the myth of the American dream, the work has begun to create a new value system based on a higher ethos. Meanwhile, the rugged practicality of the earth signs applies to the relationship domain, as Venus and Mars slowly work together in Capricorn to ensure you cut through romantic delusion, drop into your body, and attract a lover who can go the distance. It’s not all hard pragmatism, as Jupiter cruises into Pisces and unleashes a deluge of creative and spiritual possibilities. What if we could manifest a new simulation, together?

Below, we’ve compiled the best astrology to work with in 2022, for every domain of your life. We hope you survive the experience!

By hook or crook, you will face your financial destiny in 2022. In 2020, Saturn in Capricorn likely brought down your tidy plans for a window seat, insurance plan, and pension. The astrology of this new decade pushes for entrepreneurial action, starting with Jupiter’s entrance into Aries, from May 10 through October 28. Aries is the sign of independent drive, and with Jupiter’s bright light in its domain over the summer, and for most of 2023, you’ll have the support to set your new projects in motion.

To stabilize this sense of independent drive, you’ll be treated to three Mercury retrogrades, along with a Venus retrograde — all in earth signs. Taurus, Virgo, and Capricorn traditionally deal with matters of earning, self-worth, and career dynamics. 2022 begins with Venus retrograde in Capricorn, through January 29, and Mercury moving backwards through the same sign from January 26 through February 3. In Capricorn, Venus concerns herself with the material rewards of our success, while Mercury deals with the day-to-day aspects of attaining it. Take January and the start of February to reboot your public brand from the inside out, and to get clear on your highest goals, dreams, and means of making them happen.

When Mercury retrogrades in Taurus from May 22 through June 3rd, you’ll have to take a close look at what you’re earning, and by definition, what you’re worth. What are you working for? Does your paycheck compromise your identity, or your values? By the time of the Mercury retrograde in Virgo, from September 23 through October 3, you’ll be deep in the weeds. How much are you getting back for what you’re giving? What’s your output? What’s the best way to bring your goals to daily fruition?

Naturally, the eclipses will blow up any possibility of a linear process. Set on the Taurus-Scorpio spectrum (where the moon’s nodes, or axes of consciousness, are moving in 2022), these cosmic openings will deal with themes of power and abuse, worth and entitlement. The partial new moon solar eclipse in Taurus on April 30, and the full moon total lunar eclipse in Scorpio on May 16 will tap you into the ways you’ve sold yourself short and limited the possibilities of what you could have and enjoy in life. Then, the new moon partial solar eclipse in Scorpio on October 25 and the full moon total lunar eclipse in Taurus on November 8 initiate a faceoff with gatekeepers and gaslighters — real or internalized — who have held you back from claiming real power.

Of course, this all shakes down to new currencies. From March 10 through May 24, the high priestess asteroid Vesta embraces the digital possibilities of Aquarius, while Uranus the revolutionary continues its march through the money-loving Taurus all year. Take the Mercury-Uranus conjunction on April 18, and the sun-Uranus conjunction on May 5 to consider new and exciting investments. On July 31, Uranus conjoins the north node, the moon’s high point of elliptical consciousness, staying together for the rest of the year. In 2022, the forward march into new currencies, new definitions of value, and a wholly new century begins. Don’t lose your place.

To be clear, Jupiter in Pisces is a big deal. Jupiter synthesizes experience into wisdom, and as the final and oldest sign of the zodiac, Pisces acts as the ocean for all the other signs to feed into. When Jupiter returns to its oceanic kingdom, it’s like you’re coming back home. The year will be divided into two Piscean periods, with Jupiter in Pisces from December 28, 2021 through May 11, and then October 28 through December 21. The last two years were marked by survival; when Jupiter enters Pisces, your imperative is to refill your cup. You must fill these months with experiences that induce awe. Read from the Torah, sign up to bungee jump, take on a direct service role at your mutual aid, put on the improv show you and your friends have been too scared to show the world. If you’re to take the reins of your creativity and career this decade, consider this the moment of the divine download and the realization of your calling.

April is the central month for spectacle. For the first time in 150 years, Neptune and Jupiter find themselves together in their home sign of Pisces, and come into conjunction from April 9 through 12. Then, on April 26, the underwater domain plays host to a whopping five planets, as the moon, Venus and Mars join Jupiter and Neptune. If ever there was a time to put your Michael Pollan readings to use, it’s now. Queue your Grimes playlist wisely.

If you’re not already feeling the Venus retrograde (which launched December 19, 2021), you’re in denial. Through January 29, Venus in Capricorn will force a “Case of the Ex” confrontation with your past lovers, and initiate whatever changes are necessary for future viability, visibility, and romance. On February 16–17, and for the first ten days of March, Venus comes into conjunction with Mars, bringing the romantic in line with the sexual, the emotional with the physical, and the feminine with the masculine. In Capricorn, these two planets enforce rigor in your lovelife as you become the executor of your relationships. What are the people in your life doing for you? Who is in the way towards pleasure, power and world domination? Who has the guts to join your war council, to ride like a Khal by your side?

On January 8 and October 22, Venus comes into perfect alignment with the sun, in a blazing moment of ecstasy. This is Cher turning up to the Met in Moonstruck, Michelle Pfeiffer purring to Miss Kitty that she feels so much yummier. In 2022, all changes in your relationship life start with your sense of embodiment. The focus on earth signs, through retrogrades, eclipses, and beyond, is meant to drop you into your own body, give yourself a sense of weight on the ground, and put you behind the wheel again. When you feel yourself at your most powerful, you can attract and affirm the best partnerships. Double down on your downloading into yourself and you’ll become incandescent.

NEXT UP
Astrology
How to Use Astrology to Access Past Lives
Astrology
February 2023’s Full Snow Moon in Leo Embraces The Real You
Astrology
Your February 2023 Horoscope Is A Breath Of Fresh Air
Culture
Who Won At The 2023 Grammys
Style + Culture, delivered straight to your inbox.