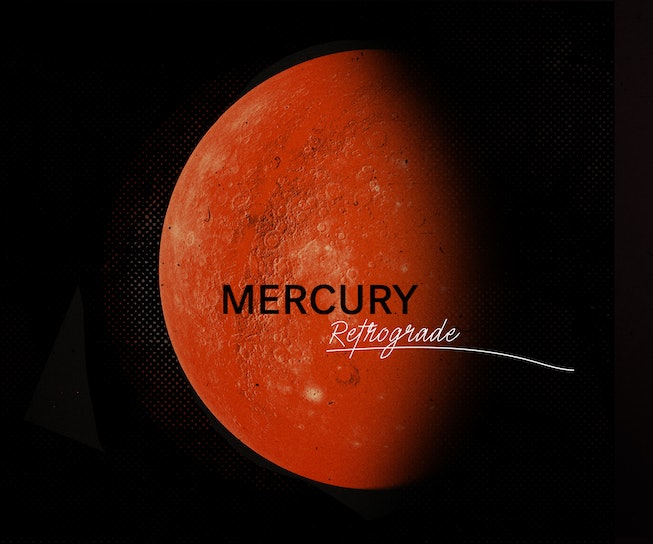 Despite the equinox on September 22, and the recent Jewish new year, autumn has so far failed to launch. A Met Gala held in September defined a summer of cultural disarray, a large-scale mess indicated by a grisly five planets currently in retrograde. Progress, by any linear standards, has become an abstract idea. From September 27 to October 18, Mercury becomes the sixth planet to stall and reverse course, wrenching the year’s challenges to a breaking point. Take this dive into uncertainty, and you may emerge with a new direction.

In what amounts to a planetary administrative shutdown, Mercury joins Jupiter, Saturn, Uranus, Neptune and Pluto in retrograde, a phenomenon in which one planet catches up to, and speeds past, another, resulting in the illusion that heavenly bodies can stop in place, or move backwards. Since the start of the summer, these more outer planets — which tend to register effects in the global sphere — have fallen like dominos, halting unity in an age of Aquarian reinvention, revealing how easily entitlement and avarice can devastate our frail systems of public health and governance.

Meanwhile, Mercury, the planet of communication and action, works in the personal sphere, yielding immediate consequences through your inbox, rent check, and travel plans. This retrograde is the cherry on top of a brutal few months: the big-picture malaise and uncertainty about your future, as symbolized by Jupiter and Saturn’s retrogrades, comes to the fore in daily life. Everything grinds to a halt. But, by the time Mercury resumes its regularly-scheduled rotation around the sun on October 18, the planets Jupiter, Saturn and Pluto will have gone direct, indicating a return to (relative!) linearity, efficiency, and possibility. A bright 2022 is in view, if you can fight your way out of this final crucible.

With the autumn equinox on September 22, in which day and night come to equal lengths, we’ve launched into Libra’s domain, where balance, harmony, and objective perfection are at stake. Ruled by Venus, the goddess of love and beauty, Libra encourages us to elevate our external circumstances to our internal vision. What do your home, your wardrobe, and your lover say about who you are? Though Libra works extra hard to keep everyone happy, it doesn’t let sentimentality compromise its ideals of perfection. Mercury’s extra time in this sign is a chance to realign, reorganize, and re-harmonize your personal sphere. The chaos of our economic and public health systems should not hold you back from bringing order to your life. The Libra retrograde invites personal initiative. Focus on your own makeover so that you’ll be ready to act with clarity, efficiency, and authority when the world gets moving again. Make your bed to work in it.

The first week of the retrograde (September 27 to October 4) promises to knock you out of orbit, forcing a pause by piling disarray on your inflexible plans. Double down on rest and restabilization by investing in routines and rituals. Bring not only peace, but space into your daily life. Consider this a preparation of the body, so that the soul feels safe to launch into a deeper journey. Week two (October 5 to 10) calls for confrontation. What, or who, stands in the way of perfection? As the sun and Mars come together in Libra, they bring your individuality into contrast with your need to keep everybody else happy. Now is the time to rehash your commitments: Examine your relationships and projects with an air sign focus on efficiency, and invest in a more streamlined direction for the rest of 2021.

This Mercury retrograde promises lurches, errors, and technical difficulties in your daily life, impeding your Martian conquest. Seek out tasks which offer release: home renovations, tennis matches, and anything that inspires individual accomplishment and expression. Start with your closet now, your finances tomorrow, and then, by the time the planets go direct, you can do the same thing you do every night...try to take over the world!

The last days of the retrograde force a showdown between the sun, our life force, and Pluto, the planet of transformation and the underworld. You have reached the origin of the disconnect, the core wound triggered by all this chaos, the primal fire which demands a sacrifice. Astrologer Robert Hand writes that this archetypal clash should indicate a “powerful sense of having purged something from your life.” Decide now what you need to part with for the sake of a new start. Libra dreams of paradise. Mercury, in service to Aphrodite’s loftiest ideals, will work to make the fantastical practical. By mid-October, many of the planets will have gone direct, inspiring a new way forward. To resume warp speed, you need to cast off dead weight. The inevitable has been delayed long enough, and time is stalling for one last period this year. Are you ready to move on?

NEXT UP
Astrology
Get To Know Aquarius, The Certified Freak Of The Zodiac
Astrology
How to Use Astrology to Access Past Lives
Astrology
Your February 2023 Horoscope Is A Breath Of Fresh Air
Astrology
January 2023’s New Moon In Aquarius Is All About The Big Picture
Style + Culture, delivered straight to your inbox.