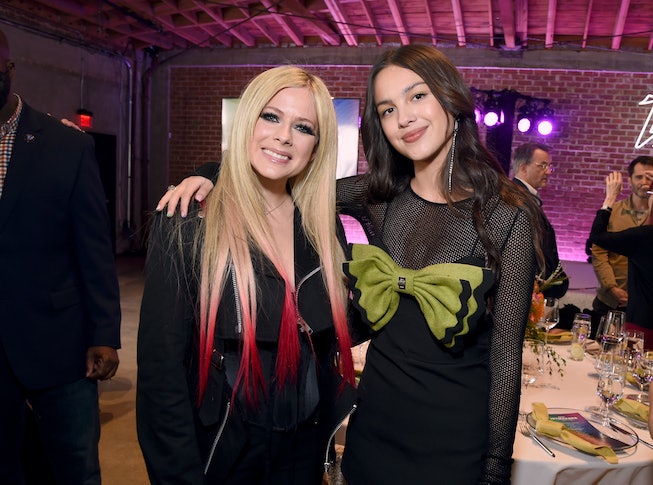 Time is famously a flat circle, and in 2021, it felt impossible to deny thanks to the resurgence of one genre of music in particular: pop-punk. One girl sang her heart out about the highs and lows of youth — getting her driver’s license and her heart broken for the first time, specifically — and her subsequent debut album, Sour, ushered in a new chapter in pop-punk music.

If by now you don’t know that the aforementioned singer-songwriter is Olivia Rodrigo, there unfortunately isn’t much I can do to help you. Rodrigo’s impact within the genre’s renaissance and the music industry at large is nothing short of seismic, and the 18-year-old was recognized as Variety’s Songwriter of the Year award at the 2021 Hitmakers event on December 4. Since Sour is now a seminal entry in the hallowed catalogue of pop-punk, it was only fitting to have one of the genre’s icons, Avril Lavigne, present her with the honor.

“Olivia’s singles from her album Sour have been part of the collective psyche of 2021, and she wrote every single one of the them,” said Lavigne. “Her songs are personal, her songs are raw, and her songs are relatable.” (I expect nothing less from a person who self-identifies as a “spicy Pisces,” but that’s neither here nor there.)

“I’ve been writing songs since I was, like, five years old, and my favorite part about all of this is that feeling of writing a song that perfectly captures how I feel better than any conversation could have, so to accept an award for songwriting is really meaningful to me,” began Rodrigo.

She continued: “When I put out ‘drivers license’ about this really hard time in my life, I watched it affect to many people, regardless of sexual orientation, or gender, or age. And to me that’s a really beautiful thing about art. And that was so special for me, to not only see how universal all those feelings were, but how music can brings us all together, and make us feel less alone. My heart and soul lies in songwriting, and so for people to connect with my music the way that they have is beyond a dream come true.”

Rodrigo’s sentiments are not only sweet, they’re also true, based off the many Spotify Wrapped screenshots I’ve seen on with her reigning the charts across the Gen Z to Elder Millennial age spectrum. Music — it’s the great equalizer! Watch Lavigne and Rodrigo take the stage in full, below.