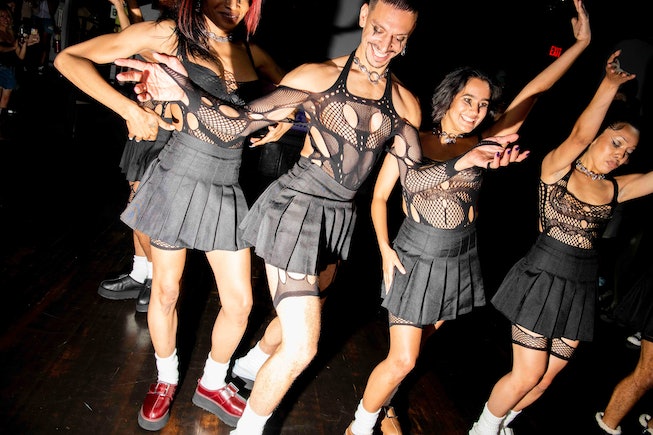 Welcome to NYLON’s Party Report Card, where we give you the Who, What, Where, Why and When on this week’s hottest parties — plus all the gossip you missed. It’s the inside scoop you need to feel like you were on the invite list. Sorry in advance for the FOMO.

WHERE: Schimanski, a private club space in Williamsburg with $10 Tecates and a blue frozen drink called “Lit.”

WHY: To celebrate 20 years since the start of fashion brand Opening Ceremony, and to debut its collaboration with UGG, revealing two custom UGG x OC styles during Spring/Summer 2023 New York Fashion Week

THE VIBE: Opening Ceremony’s 20th anniversary party boasted an absurdly stacked guest list: Chloë Sevigny, Karen O, Spike Jonze, with whisperings of an appearance by Solange, who is longtime pals with OC’s Humberto Leon and Carole Lim. The closest we got to seeing Luar was a smattering of Luar bags and the closest we got to seeing Solange was a performance by the legendary Kevin Aviance, who woke up one morning in July to hear his song “C*nty,” had been sampled by Beyoncé on Renaissance.

At one point a series of blinding pap flashes went off (celebrities don’t just wear sunglasses to look cool!), which my friend Kim and I thought were for our fashion by way of food influencer friend Pierce Abernethy — until we realized they were for Rowan Blanchard. Ella Emhoff and Sam Hine, who I somehow see around New York more than many of my close friends, were also one of maybe two straight couples in attendance, and briefly chatted on the dance floor before leaving.

People congregated around the bar, drinking Lunar hard seltzer and too sweet 818 tequila margaritas until the party kicked-off with a dance performance incorporating ballet, modern, contemporary, gymnastics, and plenty of vogueing, choreographed by Pose’s Jason Rodriguez, aka Slim Xtravaganza, who also performed. Later, we saw Rodriguez casually vogueing for friends in the corner.

It was the kind of party where it felt like it was thrown by friends for friends, a place where most people seemed to know each other, even if only reuniting. I took a selfie with a drag queen with perfect cheekbones who I have a mutual friend with, while Kim chatted with a mutual whose boyfriend does set design for Leon. I witnessed two wide-eyed old friends sprint towards each other on the dance floor ending in a dramatic pick-up hug. “It’s borderline wholesome,” Kim said. A model-slash-actor from whom I bought the hot pink patent leather skirt I was wearing after they posted it on Instagram, remarked that the Dimes Square crowd was, thankfully, nowhere to be found, likely instead at the Marc Jacobs’ Heaven party.

Every few minutes Kim would alert me to another sighing: “See that guy in the leather bucket hat? He did [xyz fashion thing]. See that guy with the pearl choker? See that person with the body jewelry?” This makes sense: Leon and Lim are in their late 40s and have amassed a staggering number of friends and collaborators in two decades, making for a celebration not just of OC, but of everything that’s ever inspired OC. (It’s also worth noting that Leon hit the dance floor hard, mostly towards the end of the night when the crowd thinned out.)

But the heart of the night was the performance by Kevin Aviance, the legendary drag queen, now famous all over the world for one word: “C*nty,” after Beyonce sampled the 90s club hit on “Pure/Honey.” Aviance performed “C*nty” and his hit “Din Da Da” for a crowd that hung on his every word; dozens of camera phones in the air. “Let me tell you something,” Aviance addressed us. “Never give up on your dreams,” eliciting an eruption of applause. “And one more thing? C*NTY.”

Afterwards, things got a little sloppier on the dance floor. An inebriated girl in a Playboy belt told me I was wearing “her favorite outfit of the night.” The party ended promptly at 2 AM, when the house lights came on to reveal guests taking the posters off the walls and conspicuously rolling them up to take home as souvenirs. I’d be lying if I said I didn’t also fish two intact ones out of the recycling.

BEST DRESSED: Kevin Aviance in a fire engine red fur coat and feather headpiece, which blew dramatically in the wind of a giant fan. Later, he removed the coat to reveal a full body corset with straps as high as his perfect cheekbones.

OVERHEARD: A tie between “They let anyone show at the Armory these days,” and “I live ‘to the East,’ which is a nice way of saying I live in the Hamptons.”