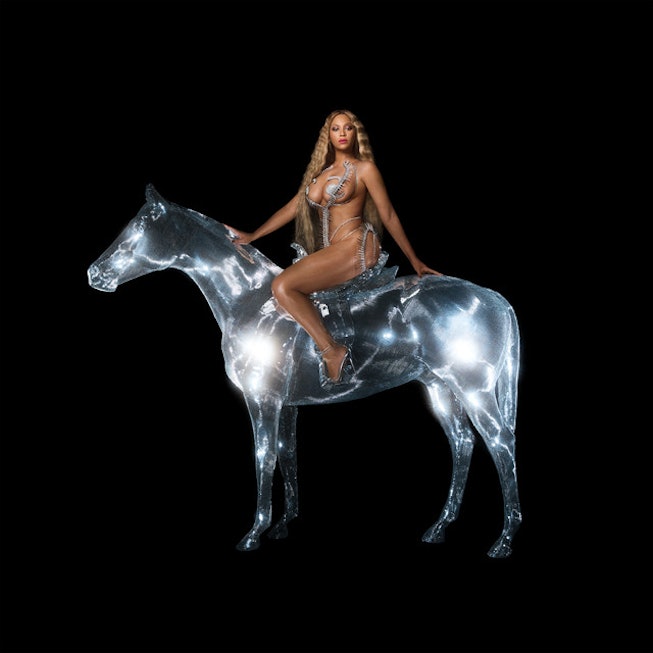 Honey Dijon. Kevin Aviance. Ts Madison. Big Freedia. MikeQ. Moi Renee. Kevin Jz Prodigy. Telfar. This is just a small sampling of the queer artists, producers, performers, and personalities who played at least a small part in the creation of Renaissance. For her seventh solo studio album (and first in six years), the artist born Beyoncé Giselle Knowles-Carter took sonic and thematic inspiration from her late “Uncle Johnny,” her gay “godmother” who helped raise her and played a pivotal role in her style evolution before dying due to AIDS-related complications when the singer was only 17. The result is the chanteuse’s most daring and experimental album to date, a seamless, pulsing record of floor-ready club music that also doubles as a celebratory ode to the under-discussed history of queer nightlife throughout the past several decades.

Of course, the idea of pop-stars looking to queer nightlife for musical inspiration isn’t exactly novel. From Diana Ross’ “I”m Coming Out” to Madonna’s “Vogue,” there’s a long history of female pop singers catering to the sounds of the dancefloor — a trend that, at least in part, echoes the invisible connection these same stars share with queer men. (The connection is so self-evident at this point that a clip of Whitney Houston talking about how “the [gay] clubs are happening” has become the go-to meme for any pop-star making a pivot towards dance sounds.) But Beyoncé has never been one to follow a traditional pop-star script; she typically zigs when her contemporaries choose to zag. So while she’s always been a key symbol of Gay Diva Worship, her music has never felt like it was made for the gays — at least not specifically.

But Renaissance makes its inspirations clear. “Thank you to all of the pioneers who originate culture, to all of the fallen angels whose contributions have gone unrecognized for far too long,” Beyoncé shared in a recent note posted on her website. “This is a celebration for you.”

For a little over an hour, the album is indeed a celebration. Its cover, featuring a scantily-clad Bey sitting astride a luminescent horse, is a nod to the iconic images of Bianca Jagger galloping through legendary New York nightclub Studio 54 in 1977 — and the reference is an ideal encapsulation for an album that uses Black queer culture to help deliver its universal message. Like that storied space, which found people of all stripes coming together to dance to music whose roots were traced back to the sweaty dancefloors of LGBTQ+ spaces, Renaissance channels the spirit of ballroom legends and drag icons alike to direct everyone to the floor.

Lead single “Break My Soul,” though far from the album’s strongest offering, was an apt entry point. With its prominent Robin S. “Show Me Love” sample and signature Big Freedia chants, the energetic bounce track feels true to what British Vogue editor-in-chief Edward Enninful described in June as “music that makes you rise…that will unite so many on the dancefloor.”

And yet, the track has also proven to be slightly misleading. In reality, Renaissance is significantly more exploratory and experimental than that single would suggest, finding Beyoncé tinkering with new sonic palettes without ever feeling like a neophyte out of her element. On album opener “I’m That Girl,” Beyoncé, without hesitation, declares, “You know all these songs sound good,” and it’s impossible not to take her at her word. (As if to underline her point, she later adds, “I’m deadass.”) With production from Kelman Duran, a Dominican reggaeton DJ/producer widely known for his genre-bending sets at popular L.A. queer dance night Mustache Mondays, the song is glitchy and strange and weird — and works precisely because of those elements.

Coincidentally, Beyoncé’s most forward-thinking album is also one of her most personal. Not personal in a diaristic sense, though. Where Lemonade found Mrs. Carter exposing the sordid recent history of her marriage to Jay-Z, revealing the sizable cracks present in one of media’s most visible and respected power couples (and in turn shattering the carefully-curated image of “Beyoncé-as-perfect-entity”), Renaissance finds Beyoncé turning inwards in a celebration of the self. It’s an album of self-indulgence, self-confidence, and unapologetic self-love.

The album arrives almost a full year into the singer’s fourth decade on this earth, and fittingly, feels like the project of someone who’s more or less thrown caution to the wind. Gone are the secretive “digital drops” and promo-averse album cycles. The Beyoncé of Renaissance is more carefree than ever — “feeling way too loose to be tied down,” as she spits on “Summer Renaissance.” She’s in on the joke, laughing as she talks her shit and flexes on her haters. “Creating this album allowed me a place to dream and to find escape,” the singer shared in the aforementioned note, explaining that the record let her feel “adventurous” and “free of perfectionism and overthinking.” Recording Renaissance, for Bey, was a “beautiful journey of exploration,” establishing a “place to scream, release, [and] feel freedom.”

That freedom is a blessing. She’s dropping it like a thotty on “Church Girl.” Her ass is getting bigger on “Thique.” On the soon-to-be edited “Heated,” she transforms into a ballroom MC, closing the Drake-co-written track with infectious commentary that’s both enjoyably nonsensical (“Bad bad bitchy make the bad bitch glitchy”) and hilariously memeable (“Your face card never declines, my god”). The first half of “Pure/Honey” is a straightforward ballroom vogue track, complete with a prominent sample of Kevin Aviance’s “Cunty” mix and the ever-familiar voice of drag queen Moi Renee invoking her inner “Miss Honey”; the latter half effortlessly glides into something groovier, recalling the roller-disco of “Blow.” Ditto for “Cuff It,” which could have easily slid in on 4. “Plastic On the Sofa,” meanwhile, is Dangerously In Love reimagined for 2022.

Renaissance channels the spirit of ballroom legends and drag icons alike to direct everyone to the floor.

There isn’t a bad song on the album, but it’s most exciting to see Beyoncé exploring sounds outside her usual purview. Second track “Cozy” rides a club-ready beat from legendary DJ and producer Honey Dijon, and her instantly recognizable house production gives the song, about being comfortable and confident in your own skin, a refreshing thumping pulse. The funky “Virgo’s Groove” marks the album midpoint and its disco-heavy glitz seems tailor-made for long nights of passionate love-making; the album’s longest track, the six-minute throbber spotlights some of the record’s most impressive vocals with Beyoncé tapping into her sexiest falsetto to demand that her lover take her right now, the anticipation of their union threatening to overwhelm her if she doesn’t get release immediately. The track has a long-lost sister in “Summer Renaissance,” which flips Donna Summer and Giorgio Moroder’s gay dancefloor mainstay “I Feel Love” into a sultry end-of-the-night DJ set-closer that concludes with a catchy rap about flaunting French haute couture, Italian luxury brands, and “imported” Telfar bags.

Then, there’s “Alien Superstar,” the genre-morphing album highlight. Led by further production from Honey Dijon, the song opens with a warning, courtesy of Foremost Poets and his 1998 track “Moonraker” — “Do not attempt to leave the dancefloor,” the deep house pioneer instructs. “The DJ booth is conducting a troubleshoot test of the entire system” — before launching into an auditory journey that traverses space and time. It’s undeniably the album’s most surprising track. If Renaissance is Beyoncé owning her status as Commander of a Nation, “Alien Superstar” is her earnest attempt to explain why she’s earned the title. Here, she is at once “too classy for this world” and “too classy to be touched.” She’s twisted, a masterpiece, and a genius. She’s unique. She’s “forever that girl.” The clothes she wears are so obscure they can’t even be clocked by label whores. Her rapper-indebted braggadocio has never felt more relaxed or more tongue-in-cheek; her references have never felt this playfully sensual.

Every few years, pop music is forced to evolve, and after the 2010s trafficked in EDM-inflected bangers, pop musicians have found themselves looking to a different kind of dancefloor. From Lady Gaga’s Chromatica to Dua Lipa’s Future Nostalgia, Jessie Ware’s What’s Your Pleasure to Kylie Minogue’s simply-titled Disco, disco has become the genre du jour for pop stars searching for catharsis during trying times. (Even the men are joining in with The Weeknd’s After Hours and Drake’s Honestly, Nevermind providing two of the most high-profile examples.) Beyoncé is one of the last stars on her level to jump on the trend, but her interpretation feels the most studied, the most reverent. As a result, it also feels the most authentic.

In marketing materials, Renaissance has been described as “Act I” of an eventual three-act project, and early rumors suggest that Acts II and III could be similar genre-specific exercises — maybe some country a la Lemonade’s “Daddy Lessons?” Deep R&B and neo-soul? Chances are we won’t find out until Beyoncé is ready to tell us. But either way, it’s exhilarating to see the performer continuing to push the boundaries, branching into new lanes seemingly without missing a single step. It says a lot that, even with back-to-back controversies surrounding two tracks on the album, Renaissance still feels like the work of a master operating at the top of her craft. This time, Beyoncé took her listeners to a gay club and everyone had a good time.

Renaissance is out now