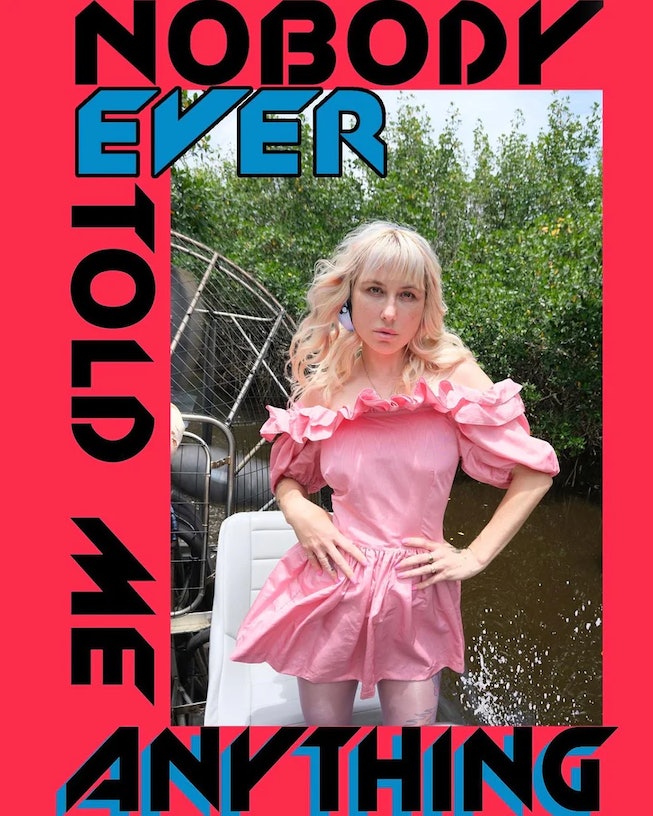 “They should have never taken you out of the swamp,” a loved one once said to Rachael Finley. It was meant to be a diss, but she has taken the swamp with her everywhere she goes. “I am the swamp,” she writes in her memoir, “dark, mucky, icky, dangerous. A force to be reckoned with.”

Finley has lived many lives in her 36 years. She’s been a ward of the state of Florida, traveled the country selling metal band T-shirts, worked as a television host for MTV and VICE, is the mother to two daughters, runs several fashion brands, and is now an author. It’s no surprise that when her blog “Steak Talk” blew up during the early days of Tumblr, her self-described “bad advice” drew in a quarter-million followers. But she’s never claimed to have all the answers. There are some people in life who seem to have gotten the memo on how to act, what to say, how to best exist in the world. Despite all of her success, that secret manual never made its way into Finley’s hands. In her debut memoir, Nobody Ever Told Me Anything, Finley tells her story, the one that, despite a career made up of keeping it real, has never been fully told. In hard-hitting, bite-sized chapters, Finley tells readers the things she wishes she had known.

At 11 years old, Finley was abandoned in the south Florida vacation rental she and her mom had been squatting in. Thanks to mall food court samples, the kindness of skaters, and her dial-up connection, she managed to live alone for an entire year before entering the foster care system. From there, the survival, scarcity-based mindset she was forced to adopt as a child powered her adventures across the country touring with metal bands, eventually landing in Los Angeles. Finley worked as a fit model for the easy paycheck, but found herself giving technical feedback that led to consulting opportunities. She co-founded the streetwear brand Teenage with her now ex-husband Blake Anderson of Workaholics, and now runs Hot Lava, the size-inclusive, Y2K-influenced womenswear brand.

Finley’s been called an It Girl, even if she’d never call herself one. She’s tall, beautiful, and has had every shade of neon in her hair at least once. The launch party for her book — held at the Los Angeles Museum of Contemporary Art — was an in-person representation of my Instagram timeline. She’s friends with metal band guys, rappers, designers, models, and moms. Everything about her oozes cool, but when she says that becoming anything close to an It Girl or influencer was never her intention, I believe it. She’s a hustler. Any attention she has for her appearance or personality, she channels into keeping her businesses running.

Before ever being in the public eye, Finley started blogging in the mid-aughts as a way to process going through chemotherapy. When a friend synced the blog posts to Tumblr, she blew up overnight. Her dark humor captured audiences even as she discussed the horrors of cancer treatment. But the edgy, scrappy attitude that grew her following and snagged the attention of long-haired guys is the same one that left her feeling like an outsider. People wanted a sprinkling of punk vibes, but not the bar fights. “As soon as they get me, they want to soften me and get surprised that those things are there when they've been there all along,” Finley says to NYLON. In her memoir, she never softens herself.

“It felt like jumping off of the pier in my hometown, that exhilarating fall right before you smack into the ocean.”

In 2012, while writing for NastyGal, a co-worker encouraged Finley to write a book. She was intrigued, but it didn’t seem like the right time. It was just a year after the passing of her mother, while she was in the midst of her second round of cancer treatments, grappling with a failing marriage. “I realized at that point I was too angry with the situations I was immersed in to make a cohesive thought and have things wrap up… I was too angry to finish. I didn’t have a point yet from my anger, it was just brooding,” she says. She tried to let the book take on other forms. At one point, she even enlisted her friend, the illustrator and designer Penelope Gazin, to transform it into a graphic novel chronicling the adventures of a girl named Shoe. Hiding behind a character made telling some of the most painful and personal stories a little less scary, but it didn’t feel right, either. “I realized how embarrassed I was that I needed a character to tell my own story,” she says. After writing close to 100 pages, she put the project aside.

Years later, after processing her own experiences and undergoing EMDR trauma therapy, Finley returned to writing. Throughout the memoir, she introduces complex, nuanced characters. But these characters, her real-life family members, boyfriends, bosses, and Finley herself, never fit into a good guy, bad guy binary. “I think I needed to make peace with myself so I could see it in other people even if that sounds selfish. I'm the best guinea pig for experimenting with duality,” she says. “We live in a society where we tell the girls to not wear a short skirt and we tell the boys not to hit the women, and that’s the education, but there’s so much that happens in the gray area,” she says. “I wanted to write this for my girls because it covers a lot of gray areas. That’s really where all this sh*t happens to us. It's not in the stuff we’ve been PSA-ed about since we were kids like, ‘Hey, wanna get in my van.’”

Like all of Finley’s creations, Nobody Ever Told Me Anything is a DIY pursuit. Through open-sourcing advice on Instagram, Finley was connected with writer and editor Tia Harestad. Tia joined her on multiple pilgrimages to Florida and spent weeks crashing with her and her family in Los Angeles, editing in person together whenever Finley had a break from her chaotic schedule. With Finley’s unique story and sizable online audience, it's likely she could get a traditional book deal, but self-publishing and owning all of the rights herself felt more true to her values. “Some people ask me how I do it and I tell them, I’m just myself. I’ve been selling me since the first day I walked alone in the mall,” she writes.

Publishing these stories in a book, not a blog post that can be edited or deleted, was a nerve-wracking, cathartic experience; even her father was unaware of what she experienced as a child. “It felt like jumping off of the pier in my hometown, that exhilarating fall right before you smack into the ocean. I was just waiting and waiting, and I kind of still feel like I'm falling like I haven’t hit the ocean,” she says.

For Finley, the nerves are worth it. “I hope someone picks up my book and goes, ‘This is for me.’ I think someone seeing themselves in the pages of my writing is really important because that’s what I needed. It goes back to the title, like nobody ever told me anything, so let me tell you. The intention of the book is for someone to be told about all of this sh*t.”

Pre-order a signed copy of Nobody Ever Told Me Anything from Hot Lava (due to ship in October) or purchase a paperback copy or Kindle version now on Amazon.