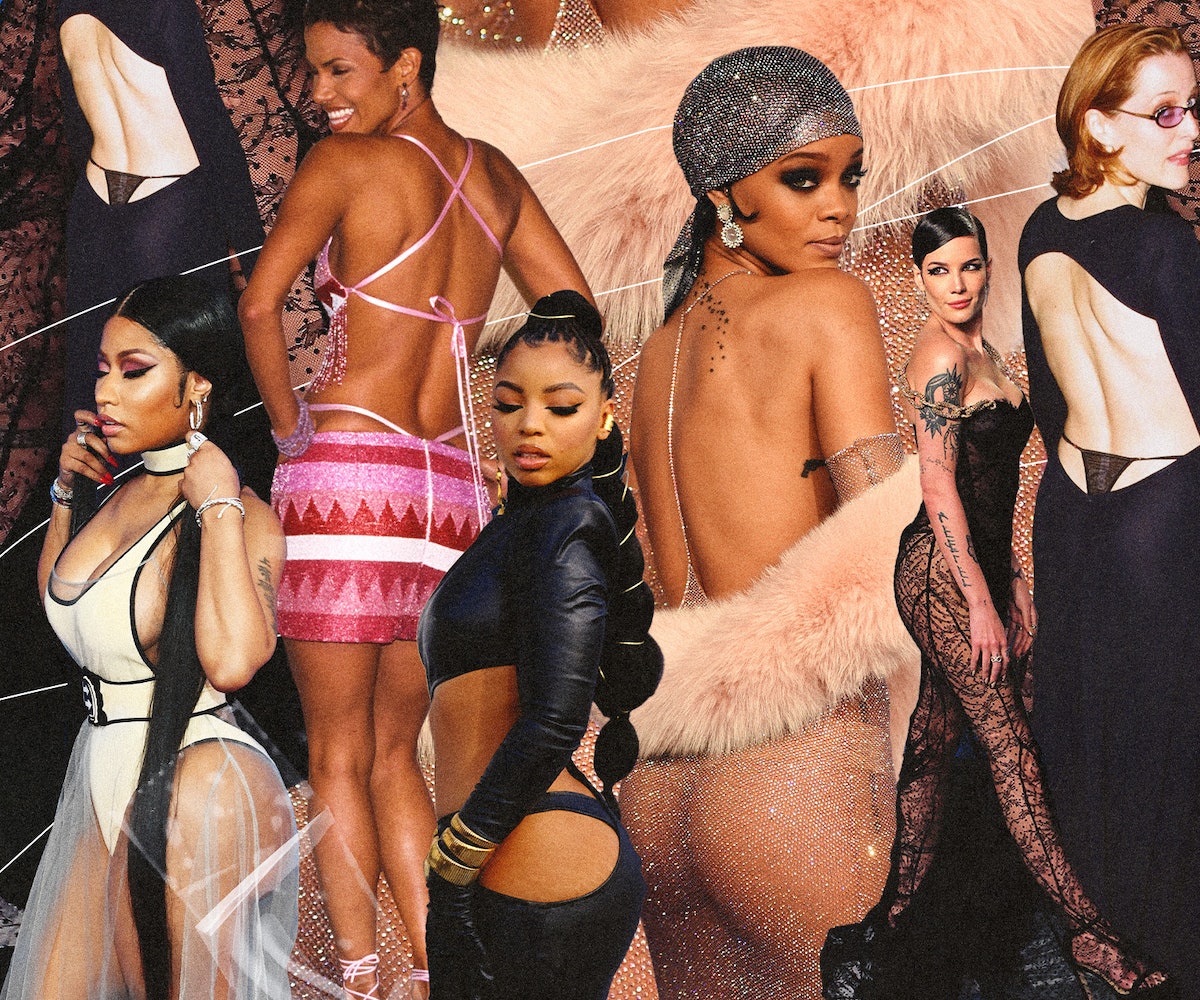 At this point, nearly every Y2K fashion trend has seen a reprisal. So it was only a matter of time before the exposed thong — and the most polarizing one of them all — resurfaced.

Over the past couple of months, the most respected “It” girls, such as Dua Lipa, Emily Ratajkowski, Britney Spears (at her wedding!), Chlöe Bailey, and, of course, Julia Fox have all publicly sported visible thongs, also known as “whale tale,” while out or on their social feeds. Most recently, Bella Hadid starred in a new Balenciaga campaign with the brand’s black thong peeking from the back of a pair of pants. It’s a safe assessment that what once was gauche has officially made its way into mainstream and high fashion yet again — and all of this comes at an interesting time.

To reference Cher from Clueless, a bit of exposed skin can make men think of you naked and, therefore, make them want you. While this is an antiquated notion (we still love you, Cher), it showcases the flawed way of thinking about “suggestive” fashion in 2022. Some may argue that flashing one’s thong is only for the pleasure of the male gaze and, thus, inherently anti-feminist, but others rebute that not wearing what you want only further stifles a woman’s right to choose.

“I think we are seeing an uptick in barely-there clothing because of the body positivity and sex-positive movements,” says Rachael Finley, founder of Los Angeles-based slow fashion brand Hot Lava, regarding the controversial throwback trend. Back in April, Hot Lava released a collection of thongs made in collaboration with the celebrity thong pioneer herself, Degrassi’s influential Cassie Steele, whose 2003 hallway strut as Manny Santos shaped a generation. “It’s the highest selling collection we’ve ever had,” Finley tells NYLON.

The founder of lingerie brand Fleur du Mal, Jennifer Zuccarini, agrees that the thong business has been booming as of late. “We’ve definitely seen an uptick in sales,” she says. “Women are more open to wearing V-strings at the moment.” Though fashion is inherently cyclical, the rise of exposed thongs happening now in 2022, of all moments, is deeper than just another Y2K regurgitation but an insight into how women are grappling with our fate through fashion.

The vile overturning of Roe v. Wade has served as a tangible reminder (or, for some, a news flash) that this country not only chose to decline women’s human right to control their own bodies but also our nation’s right to freedom. Once the initial trauma-induced shock dispersed, women were forced to evaluate, and hold on tighter, to what freedom we maintain regarding our vessels — from what we put into our bodies (our health quandaries often dangerously overlooked) to what we put on our exteriors. “The more people put boundaries on others and oppress people, the more people will ‘act out,’” says Finley. “Dressing in a provocative way is in fact a protest against people who want to contain or shame.”

“Dressing in a provocative way is in fact a protest against people who want to contain or shame.”

For new generations, owning one’s sexuality is a rebellion against the patriarchy and, although that notion is not a new one, this includes what they wear. Can deciding that a “sexier” outfit is empowering prevent the possibility of being objectified by others? Perhaps not, but feeling powerful in a hot outfit, at the very least, is your own choice to make. Being demonized and punished for our birth-given right to enjoy sex and feel sexy is an infringement of our very human experience here, which everyone should be concerned about. Actively fighting misogyny with weaponized hyperfemininity (by wearing whatever you want) is a noble commitment to one’s own truth. And it’s no surprise that the reason it is so commendable to do so is because of the risks it can entail.

“Unfortunately, because we spend so much time telling women what not to do instead of raising boys correctly, you will always have to be cautious,” says Finley. “We don’t live in a world that allows women to be. It’s all connected including the violence against us. I don’t think that should stop you from looking the way you desire but please be safe, travel with friends, and carry mace. And it doesn’t matter how you're dressed, you can and will be in danger no matter what is showing or not.”

Today, the divisive whale-tale trend returns firmly grounded in women’s empowerment, according to Fleur du Mal’s Zuccarini: “Having the freedom to express yourself and wear whatever pleases you, whatever makes you feel incredible, is empowering. If that’s an exposed thong, then great.”

Whether you’re ready to partake in the trend or support it from the sidelines, here are NYLON’s favorite moments of when an exposed thong made its mark on fashion history, ahead.

Cher showcased her infamous butt tattoos in fishnet stockings at a 1992 performance in London. The superstar was a defining proponent of visible thongs, as she wore them on and off the stage throughout the ‘80s and ‘90s, including her iconic “If I Could Turn Back Time” music video from 1989.

Perhaps one of the most instrumental thongs of the 20th century, Rose McGowan graced the 1998 MTV VMAs red carpet in a fishnet frock and G-string panty as her first public appearance following the actor’s sexual assault allegations against Harvey Weinstein. In a 2020 interview with Yahoo, McGowan said, “I just felt like, ‘Oh Hollywood, would you want a body just that you can use and throw away? Then I’ve got one for you!’ And if you look at me, I did it with power. I didn’t do it with my hand on my hip to be sexy.”

The barely-there ensemble kickstarted Hollywood’s “naked” dress trend and, later, the dress’ designer Maja Hanson told Page Six, “I was always interested in spreading a message of empowerment — not necessarily anything political, but showing women in a position of strength, and [sharing the message that] your body is yours to show however you want.” It was also the same year that Monica Lewinsky’s alleged thong-flashing made headlines that shocked the nation.

While attending the 2000 MTV Movie Awards in Los Angeles, Halle Berry wore the most Y2K bedazzled set imaginable complete with beaded fringe and a pink strappy thong. Aaliyah, alongside Berry, also had a pivotal influence on the visible panty trend, wearing one in her 1998 “Are You That Somebody” music video and again in her 2001 “We Need a Resolution” music video, which was encrusted with diamonds.

With just skinny sunnies and a mesh G-string to accessorize, The Crown star proved minimalism can be dramatic at a 2001 Vanity Fair Oscars after party. The unassuming look sparked conversation around the necessity and paradoxical taboo of women’s undergarments. If only she’d spill her story behind the iconic thong…

We would be remiss to not credit the Y2K fashion queen herself for her tireless dedication to low-rise waistbands. With way too many moments captured by the media to include, Hilton doesn’t have a single defining “whale tale” moment but rather a countless amount throughout the early aughts both on the runway, off-duty, and at her 21st birthday party.

Aired in October 2003, Cassie Steele’s character Manny Santos shaped a generation with a single blue, strappy garment in Degrassi’s “U Got The Look” episode. At the time, low-rise jeans were already in style but it wasn’t until Steele’s infamous hallway strut that teens and young adults committed to the scantily-clad accessory as a status symbol. The moment is so pivotal in pop culture history that Steele recently reprised the scene by making her own thongs in collaboration with the brand Hot Lava.

Designed by Adam Selman, RiRi accepted the 2014 CFDA Fashion Icon award in a bejeweled slip gown that was analyzed around the world. In her 2016 Vogue cover interview, Rihanna admitted that not wearing a bedazzled thong that evening is her “only regret in life” — oh, to be the coolest mom ever.

The Kardashian-Jenner sister shocked the 2017 Met Gala stairs in a sultry lace dress by La Perla, displaying a visible black G-string that leaves little to the imagination — a move that single-handedly “resurrect[ed] the red carpet thong,” according to Vogue’s Liana Satenstein. This garment choice proved to be true when Kar-Jen bestie Hailey Bieber followed suit the next year.

Queen of the Barbs accepted the 2018 MTV VMA award for Best Hip-Hop Video in a thong-cut bodysuit topped with a sheer tulle maxi skirt from Off-White’s Fall 2018 collection designed by Virgil Abloh.

Mrs. Bieber takes a page out of Kendall’s fashion book by sporting a high-coverage gown (sans the exposed backside), designed by Alexander Wang, to the 2019 Met Gala.

Beyoncé graced the December 2020 cover of British Vogue, photographed by Kennedi Carter, flaunting a Christopher John Rogers plunging backless dress exposing a crystal thong from Agent Provocateur. This is not the first (nor the last) time that Bey showed some self-love in a cheek-less panty. Plus, earlier that year in October, Kim Kardashian also shared her rendition of a whale tale on Instagram, wearing a cut-out black gown and red rhinestone thong designed by Matthew Williams for Givenchy.

Present day, countless “It” girls are flaunting thong straps around their hips. Recently, Bella Hadid has been parading a stringy black thong all over New York City, either between co-ord sets or hiked above waistbands. Dua Lipa once hit the town in printed mesh leggings that exposed her own undergarment, while Emily Ratajakowski took a stroll in the city in a sheer Coperni dress. At the 2022 Vanity Fair Oscar after party, Halsey arrived on the red carpet in a see-through lace gown. Now that our undies are on full display, what will be fashion’s next risky trend?