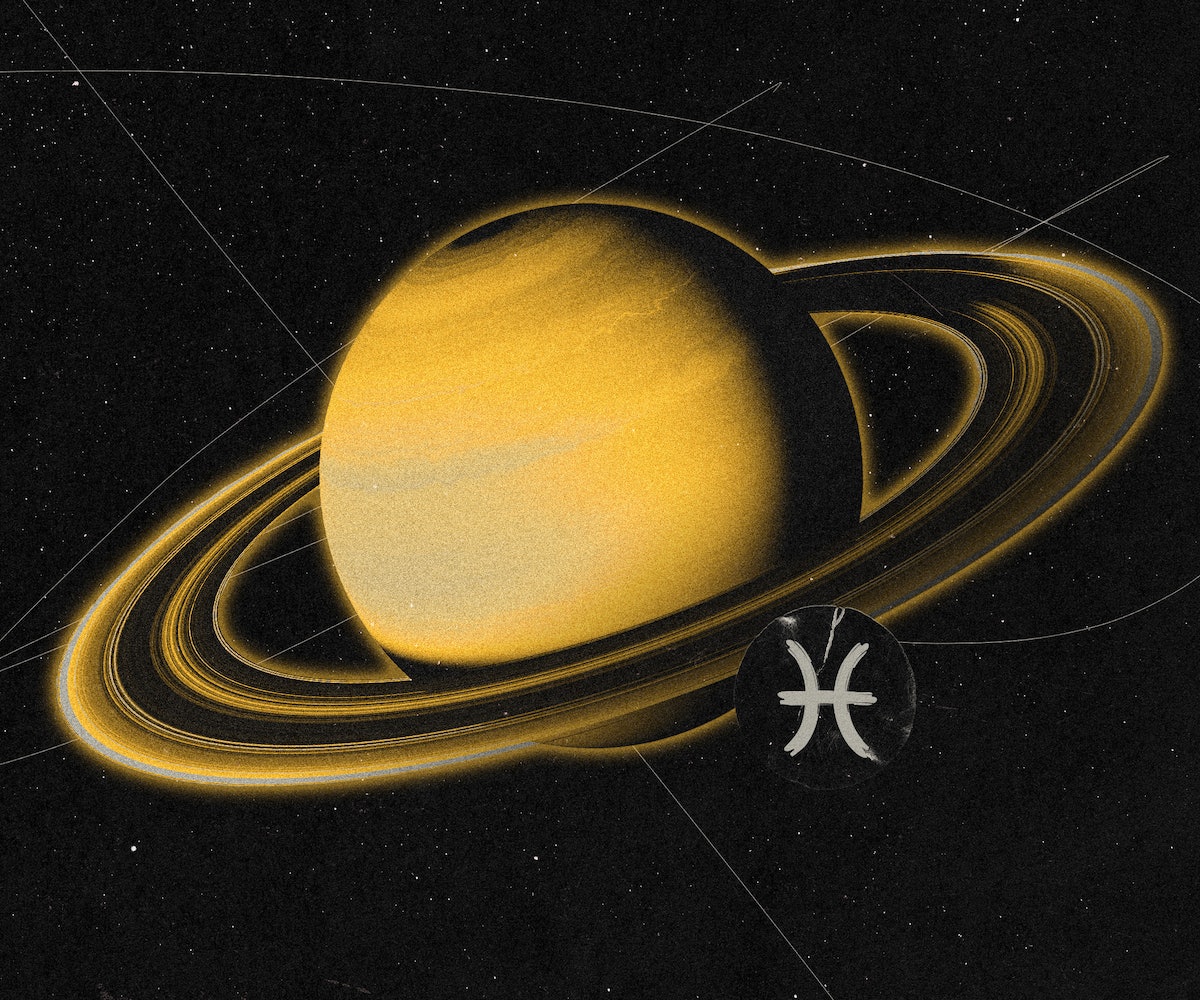 On March 7, 2023, Saturn, the great planet of form, hits Pisces, the ocean of undoing. From 2023 until February, 2026, Saturn will make order from the ethers of technology, culture, pharmacology, and spirituality, and the withdrawals will be rough. What can Saturn’s last tour in Pisces, in the mid-’90s, reveal about this go around? For those experiencing their first, second, or third Saturn Return — think Timotheé Chalamet, Keanu Reeves, and Jane Fonda, respectively — what lessons will this saga bring? Here’s how Saturn in Pisces will shape a new future.

For thousands of years, Saturn was thought to be the final planet in our solar system, the known edge of consciousness. Ruling borders and endings, Saturn teaches us our limits, helping us assume form so that we can meet our destinies in fighting shape. Saturn can manifest as Obi Wan or Pai Mei, wise mentors instructing you in techniques of mastery; but can just as often materialized as The Trunchbull, a patriarchal terror which forces you to stand up for yourself, and use your powers for a purpose. Without Saturn, we would never realize our potential, take responsibility for our actions, and learn how to cope with the hard realities of life.

Saturn takes a full 28–30 years to make a full revolution through the zodiac. When it returns to its start position from when you were born, you are in for something of a cosmic catch-up, or training montage, meant to eject you from childhood complacency and into a new world of possibility. The first return, at the end of your twenties, is meant to kickstart your adulthood; round two, in your mid-fifties, helps give your life and work a higher meaning; and the final round, in your eighties, focuses on what you wish to leave the world with when you go.

On a global level, Saturn’s transits deal with structures and monoliths: some which must fall so that new ones may be built. Saturn often stands for the traditional, patriarchal, and capitalist, which must be reckoned with: either by rebellion, assimilation, or reinvention. Saturn’s arrival in Pisces culminates a cycle begun in 1996. What led us here, and what shape will this finale take?

The final sign of the zodiac stands at the base of the tides, receiving the lessons of the previous 11 signs concurrently. The Piscean mind surfs the waves of interconnected cosmic consciousness, collecting ideas, influences, and revelations to share with the rest of humanity. This is the sign of high-vibrational inspiration, of the visionary and the messiah — and correspondingly, the junkie and saboteur. Awash in an empathic torrent, the Piscean often swims upstream, choosing themselves and leaving all others to drown. Both Jesus and Judas are symbols of Pisces, indicating that the roles of victim, villain, and messiah can be interchangeable, and up to the interpretation of the subject.

Saturn works with mechanics and order, and has its work cut out for it when thrown into shapeless waters of Pisces. In your chart, this transit can often represent the burning of Icarus’ wings, and the rock-bottom which leads to sobriety. More constructively, Saturn can help build the basket that delivers Moses down the river, or the rocket ship that ferries Superman to earth. What are the tools, structures and protections needed to keep you from drowning in the abyss? How can you take responsibility for your gifts?

SATURN IN PISCES: THE LAST TIME

Saturn last toured Pisces between May 1993 and April 1996, (with some retrogrades). This transit began with a senate commission on the effect of violent video games on young minds, set off by the breakaway hit Mortal Kombat. Saturn would depart Pisces a few years later, just before the debut of Scream, which satirized the notion that young people could be corrupted by the media — even to the point of homicide. The cultural current was overwhelming, deafening, and soul-annihilating. The Pisces Kurt Cobain would become the ultimate messiah figure of the age, embodying a revolutionary artistic sensitivity that could not endure in a savage, cannibalistic industry. The heroes of Reality Bites and Trainspotting coped through dissociation and addiction. Of course, the final girl of this new age, Scream’s Sidney Prescott, would beat her way to the end through iron-hard, Saturnian, sobriety, never drinking the Kool-Aid of nihilism and fame addiction. “This is life,” she says to her would-be-slayer. “This isn’t a movie.”

Culture had perhaps never reached a more bombastic, overwhelming deluge than at this point. But those who could safely cruise the current, and preserve their individual points of view, returned with artistic grails which synthesized and revitalized all that had come before: Jurassic Park, Pulp Fiction, Toy Story, and Harry Potter and the Philosopher’s Stone revived old themes through new technologies and sensibilities. Meanwhile, The X-Files and Grant Morrisson’s The Invisibles brought conspiracy culture and queer radicalism into the domain of pop fiction.

By the time Saturn entered Aries, in 1996, a new consciousness had emerged, fed on the amniotic nutrients of pop culture and the world wide web. The century to come would bring fast evolution and bitter backlash; its symbols would have to be armed with the wit and wherewithal to endure the deluge. And so arrived the new warriors: among them, Buffy the Vampire Slayer, Destiny’s Child, and the Spice Girls. These immortal archetypes could be picked off, but never corrupted.

SATURN IN PISCES: THIS TIME

Saturn will cruise through Pisces from March 7, 2023 through May 24, 2025, then from August 31, 2025 until Feb 13, 2026. This ends a full cycle of hyper-pop late capitalism which began in 1996. The boom of ’90s culture seems quaint now; Everything Everywhere All At Once sums up the Piscean whirlpool of influence, stimulus, and noise all around us, both dazzling and destroying. Every aspect of life is digitized, surveilled, and branded for advertisement. Experience has been meme-ified. Impending climate doom has encouraged nihilism, despair and depression. We need direction, as only Saturn can provide.

Globally, Saturn will introduce ethics to levee the floods. Look for increased accountability over the adult film industry, calls to raise the minimum age for social media target advertisement (which is currently 13 years old), and regulation over Silicon Valley. The opioid crisis, a preventable scourge wrought by the pharmaceutical industry, will be reckoned with, along with the Western over-reliance on psychopharmacology. Efforts to repeal cannabis punishments will gain more mainstream traction. Those controlling the streams of consumption will have to face accountability — however minimal they may take form.

On a personal level, the excuse of overwhelm and dissociation will grow tiresome. You’ll have to take responsibility for all your mindless behaviors — from scrolling to snorting to swiping. Nihilism, in the face of apocalypse, will no longer be interesting, nor will conspiracy theories which conveniently cast you as a perpetual victim. The children of the ’90s had to clear a path out of the AIDS holocaust and late capitalist malaise; the new generations will similarly have to take claim their destinies, no matter how grim the forecast for climate catastrophe, social disconnection, and mass surveillance.

Jane Fonda, born with Saturn in Pisces, ditched her patrician WASP image to fight against bloodshed. Sinead O’Connor left the mainstream music industry behind to retain her authenticity. Robert Downey Jr. went from unstable and uncastable to all-powerful Avenger. Whether the choice is to defy, desert, or assert power, a choice must be made. Those without sobriety and accountability will inevitably drown in the stream, subsumed by the algorithm, consumers who never became creators.

That’s not to say that everyone will have to buck up and suddenly get hard. Count on Saturn to validate recent expanses in psychology, psychedelics, and self-definition. The language of IFS (Internal Family Systems) has gained popularity through its embrace of inner children and parts, and will enter the mainstream dialogue on care and recovery. Just as gender identity has gone from binary to constellational over the past decade, so will the Piscean concept of quantum selfhood. The mainstreaming of psychedelia, and new revivals of neo-paganism and ritual practice will create new spaces of community. Meanwhile, the cultures of toxic wellness, spirituality, and manifesting will be put under review. The God of the 2020s will foster connection, service, and self-sacrifice — not self-aggrandizement on a cosmic scale.

The rising generations of digital natives will elect how they’d like to put their vast and versatile skills to use. What would you like to do with your gifts? As Jupiter, Saturn, and Neptune all cross through Aries over the next decade, a new pantheon of artists will rise, voiced in the language of the future. The nostalgia machine will dismantle as original points of view lead the way forward. The answer won’t be to shun technology, but to put it to higher service. Those who experience their Saturn Returns in Pisces will come out with a sense of purpose, perspective, and eagerness to share their gifts with the world.

A new form is evolving, one which can swim upstream, through a maelstrom of conspiracy theories, political mistruths, GOOP gulags, franchise reboots, reaction videos, and targeted ads. For those with the optimism to look forward — and the will to carry on — Saturn will feed you gillyweed and ready you for the trials to come. Pisces is the sign of sacrifice, of the divine ascetic who renounces the distractions of the world. Don’t be afraid to let go of it all. Only in silence will you hear your calling ring out.