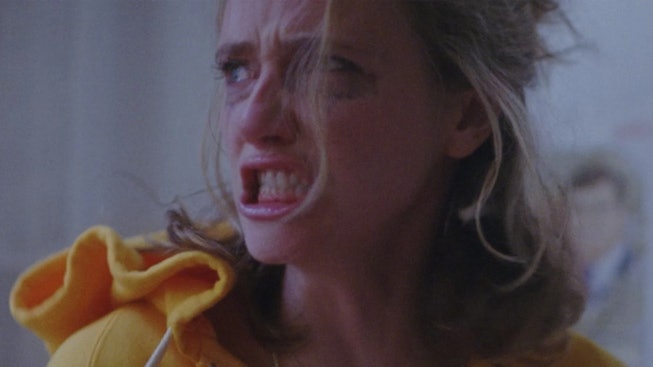 Searching for an apartment in New York City is already a unique taste of hell, and things can only go downhill once you realize you’ve rented a demonic property that once belonged to the infamous billionaire pedophile, Jeffrey Epstein. It’s the premise of the psychosexual horror film The Scary of Sixty-First, the directorial debut of actress Dasha Nekrasova, which premiered at the 2021 Berlin Film Festival and gets its first official trailer on October 12.

Co-written by Nekrasova and Madeline Quinn, The Scary of Sixty-First takes place in the aftermath of Epstein’s death in 2019. College friends Noelle and Addie (Quinn and Betsey Brown) find that their new, luxe Upper East Side duplex — along with the arrival of a mysterious sleuth only referred to as The Girl (Nekrasova) — is sending them down different spirals. Noelle and The Girl, armed with a continuous supply of Vvyanse water, obsess over Epstein’s death with its related conspiracies, while Addie descends into a sexual pseudo-possession by a pedophilic entity. “This is our 9/11,” The Girl says at the trailer’s start, and it’s a promise of a wild, searching ride for answers in a twisted world.

The Scary of Sixty-First features an original score by percussionist Eli Keszler, who previously contributed to Daniel Lopatin’s anxiety-producing score for the Safdie Brothers’ Uncut Gems, along with a sharp, funny, and totally deviant screenplay. Nekrasova and Quinn began writing the script, originally planned as a short, in late 2019 on the rooftop deck of the Equinox on 61st Street as a way to parse through their feelings surrounding Epstein’s murky death.

“[Epstein’s death] made me feel really manic and helpless, and it confirmed a lot of my most paranoid thoughts. I think that's why it's such a popular conspiracy because it really affirmed a lot of people's feelings of powerlessness and made it clear that there is a ruling class and our interests run counter to theirs,” Nekrasova told NYLON in 2020. “They're extremely powerful and really sinister in shadowy ways. I was just at a loss of what to do with that feeling of futility.”

In addition to co-writing, directing, and starring in The Scary of Sixty-First, Nekrasova co-hosts the cultural analysis podcast Red Scare with Anna Khachyian, and joins the highly-anticipated third season of HBO’s Succession as Comfrey, a crisis PR assistant.

The Scary of Sixty-First premieres theatrically in New York at the Quad Cinema on December 17, and will hit digital platforms on December 24, as the film continues to roll out in cinemas in 35mm. Watch the trailer, below.