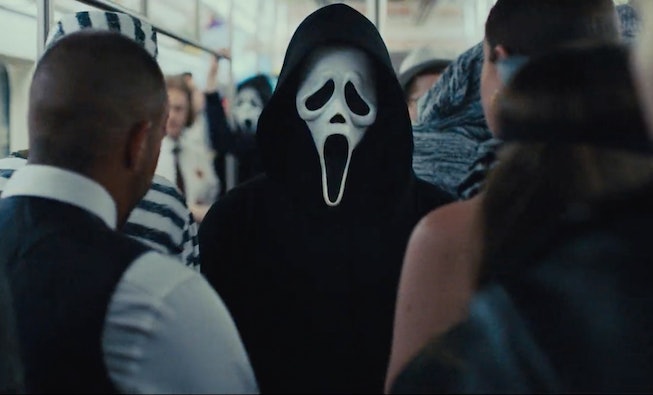 Wes Craven’s masterpiece franchise always had two ground rules: Sidney Prescott is the ultimate final girl, and the horror would go down in Woodsboro. Now, for the franchise’s next installment, Scream 6, those rules are being slashed to death by Ghostface. Not only will it be the first film without Neve Campbell reprising her iconic role, but the film will also leave the confines of Woodsboro for a bigger, much more densely populated playground: New York City.

In the first Scream 6 easer trailer, the new generation of Ghostface’s obsession, which includes up-and-coming scream queen Jenna Ortega, is on a packed subway train. While this may be more of a nightmare in an existential way, things quickly get very real when someone clad in a Ghostface mask begins inching closer and closer until it’s too late. Alongside sweeping shots of New York’s buildings, the bonechilling tagline flashes across the screen: “In a city of millions, no one hears you scream.” Dark, and kinda true!

Now, in the film’s extended trailer, more lore is revealed. There’s a shrine dedicated to the storied Ghostface killers of the past, about calls from unknown numbers about “playing games,” and a seemingly impossible to kill maked operative who will not let Woodsboro-related drama rest. Plus, Ortega and Melissa Barrera barrel into a packed NYC deli as they try to escape Ghostface, only to have him immediately get access to a shotgun. It’s the Scream way!

“Horror sets are the most fun sets you’ll ever be on. I feel like people who work on horror typically are fans of horror. They love it. They live for it,” Ortega told NYLON ahead of the franchise reboot Scream at the top of the year. “They have all the best film references. It’s pure entertainment. You’re not trying to overly impress anybody. You’re just trying to give people good time.”

Along with Ortega, Scream 6 also has Matt Bettinelli-Olpin and Tyler Gillett returning to direct. The duo previously worked on the 2019 campy class warfare horror flick, Ready or Not, and are huge fans of Craven’s work and scaring their audiences to death.

"If something’s truly scary, it’s just going to be fucking scary and that’s our aim," Bettinelli-Olpin told Collider ahead of Scream’s release. "And that’s something we learned from Wes Craven going all the way back to Last House on the Left. Nightmare on Elm Street was probably one of the first horror movies any of us saw that truly scared us in a major, major way seeing that as a kid. When it comes to that kind of thing, I think that’s one of our main goals is just to make sure that the scary is scary and not try to be gentle about it."

Watch the official Scream 6 trailer, below.

This article was originally published on Dec. 14, 2022