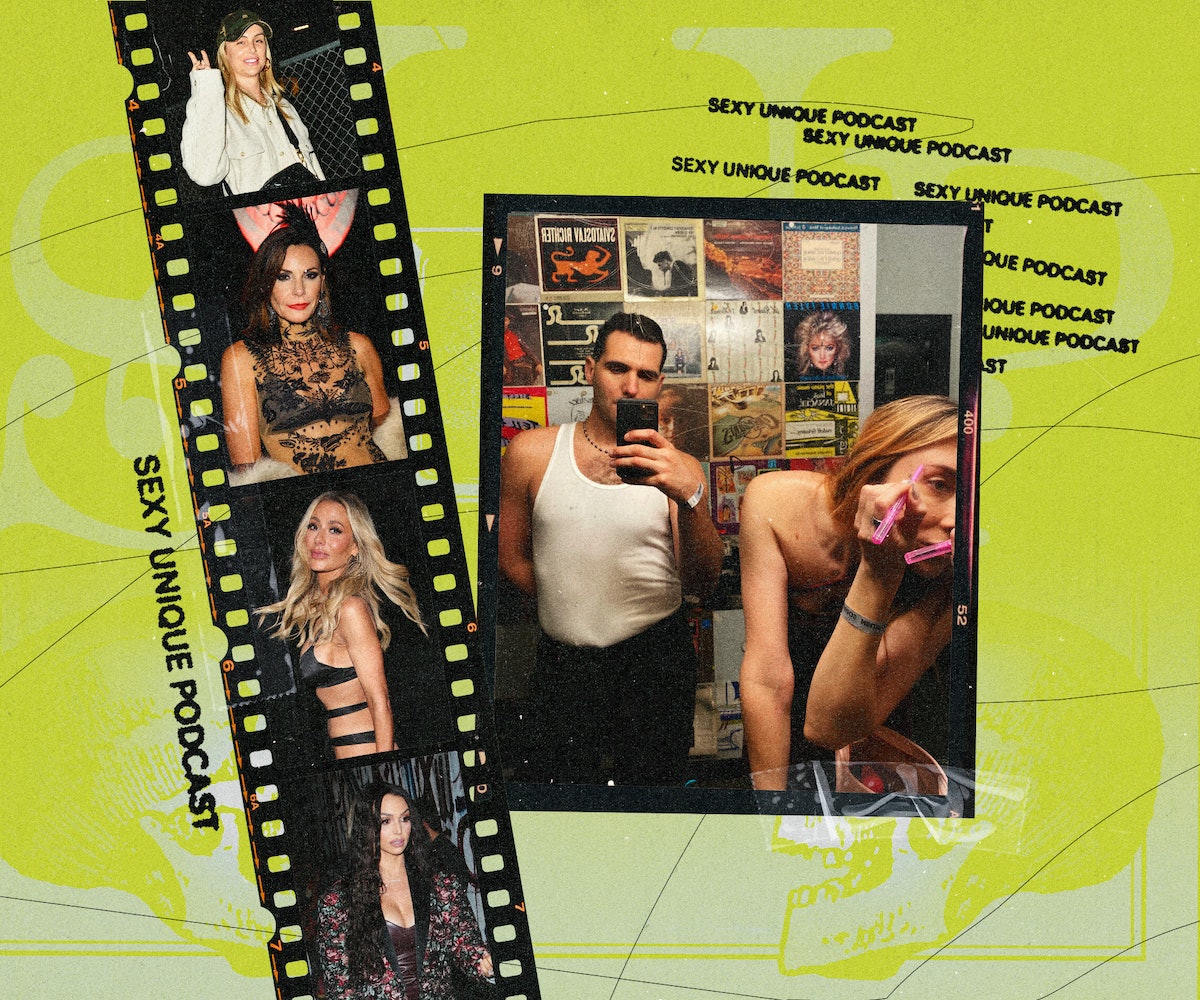 Musings like this are regular occurrences on Sexy Unique Podcast, a popular podcast hosted by longtime friends Lara Marie Schoenhals and O'Donnell that recaps and psychoanalyzes the happenings in reality television from Bravo’s arsenal of shows and beyond. Both Schoenhals and O'Donnell hail from different corners of the entertainment world — Schoenhals wrote for the early Twitter account White Girl Problems, and O'Donnell for PAPER and the television adaptation of Heathers. Schoenhals launched Sexy Unique Podcast in 2017, which in its infancy was dedicated to recapping the tragicomedy antics of the young, delusional, and twisted cast of Vanderpump Rules; in 2019, O'Donnell joined Schoenhals as the podcast’s permanent co-host. The podcast name itself is a nod to Bravo mercenary and the lady of the Villa Rosa fortress, Lisa Vanderpump; the former Beverly Hills housewife owns the West Hollywood restaurant Sexy Unique Restaurant, known as SUR, the stomping grounds for her spinoff, Vanderpump Rules.

SUP is not in the business of blindly fawning over their subjects, be they veteran Housewives or reality television pioneers. “Two things I feel very strongly about is no one should stan politicians and no one should stan a Bravolebrity,” says O'Donnell. Instead, the duo analyze and unpack reality television, impervious to the tricks of editing, producer magic, and interference from cast members themselves. Schoenhals and O'Donnell are more than fans and viewers: They’re reality television anthropologists, bemused scholars who can get to the heart of the skeletons that those on-screen are desperate to keep hidden.

“I think we're good at finding shows that we're ultimately really enthusiastic about and that inspire a lot of conversation. If something's not working for us, we just say that on the pod and we'll analyze it from a production standpoint,” says Schoenhals. “I’m always saying the producers should listen to the pod because we actually give incredible tips. I give away these gems for free.”

It’s a perfect pairing, considering how reality television, Bravo in particular, is a magnet for the type of ego-driven personality on the brink of implosion. There’s Real Housewives of Salt Lake City’s Jen Shah flaunting her dubious wealth only to flee from the Feds on camera for wire fraud; Vanderpump Rules’ model-slash-bartender and pathological liar, Jax Taylor, bug-eyed and feral off Adderall, announcing to his alleged best friend and co-worker that he’s the number one guy in the group; and the rest of the list could quite literally take up the rest of this article. At a time when Gen Z is discovering the psychological depravity of America’s Next Top Model in real time, Schoenhals and O'Donnell poise themselves as early connoisseurs of reality television who cut their teeth with foundational watches like NYC Prep, Gallery Girls, and Flavor of Love, samples from a bygone era of the genre that was less self-aware, and at its most shameless.

“Reality TV by nature is exploitative. We enter that agreement as watchers and viewers, and the network knows that as well,” says Schoenhals. “I know that I'm going to be watching people do really shitty things to each other and I know what they're doing and saying is often very wrong, but I like to see it because it's wrong and because it's a mirror and a learning experience.”

Like every podcast worth its following, SUP has its own delightful language shared between its fandom. Erika Jayne Girdardi, the disgraced Beverly Hills housewife caught up in her estranged husband’s harrowing embezzlement scandals, is referred to as EJ Global; the drunken slurs of cast members mid-fight is categorized as shonking; but perhaps the most important aspect of SUP’s vernacular is the hosts’ lively back and forth. “Janice [Dickinson] is the apocalypse,” says Schoenhals as the two quip about The Surreal Life during our interview. “Janice is a harbinger, but she's a survivor. And Omarosa…” says O'Donnell. “She's an essential worker,” Schoenhals answers.

Recently, SUP’s coverage of Season 12 of Real Housewives of Beverly Hills (“Beverly Hells Angels,” they’ve dubbed it) was rocked, not by the reveal of Dorit Kemsley’s tepidly received “Homeless Not Toothless” charity, but by newcomer Diana Jenkins. On Aug. 31, Jenkins posted a series of cease and desist letters from a Chicago law firm threatening legal action against those who had spoken about her alleged sex trafficking. Among the recipients were media publications like Gawker and Jezebel, the blind items website Enty Lawyer, and SUP.

“Carey had sent me a screenshot of her Instagram. I thought some other Bravo meme account had just made a Photoshop jokey thing. Then, I double checked it and was like, ‘Oh, holy shit,’” says Schoenhals. “In situations like this with rich, sensitive people, I'm now realizing they have the power to do something like that. And, that feels at once extremely American, but extremely un-American.”

SUP took the claims seriously, but they still had their fun: Schoenhals did a dramatic reading of the entire cease and desist letter, noting spelling and grammatical errors as she went, on her Instagram Live. The situation, however, speaks to a more glaring issue in reality television at large. Civilians are held to the same standard as journalists, podcasts are lumped in with newsrooms, and poking fun at something that aired to millions of people could get you threatened with legal action.

“I think everyone is so hyper-aware because of social media of how they come off, that everyone's a producer now. Everyone has their producer hats on and it's not as fun,” says O'Donnell. “You can see it, especially on Beverly Hills. They're so aware and media trained, and you see it playing out. It's not as authentic as when Kim Richards, bless her heart, was staring through the blinds, turning her chicken salad, or telling Lisa Vanderpump, ‘I've been here for days in Paris’ when she's only been there for an hour. That's not going to happen again.”

Even if it doesn’t, that’s okay. SUP will still be there to find and unpack the unhinged as it is.