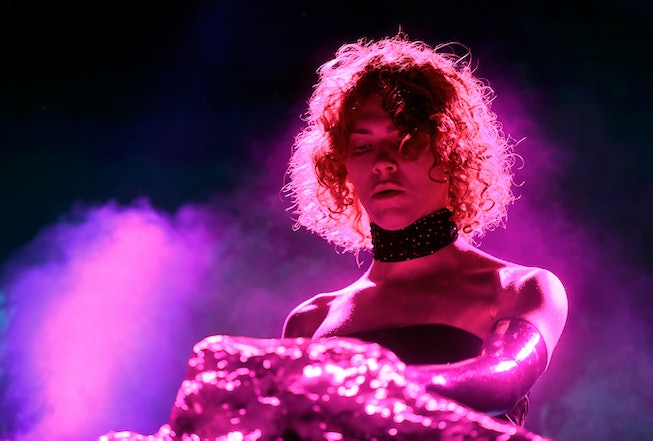 A little over a year since the sudden passing of avant-garde pop star and producer SOPHIE, she’s officially part of the solar system as an asteroid memorialized in her honor.

Back in February 2021, SOPHIE fan Christian Arroyo began a petition to dedicate the planet TOI-1338 b in honor of the late pop star, noting that the pale lavender, cloudy atmosphere of the planet (discovered in the summer of 2019 by Wolf Cukier) looked similar to the ethereal album cover art of SOPHIE’s debut record Oil of Every Pearl's Un-Insides. "I am requesting that TOI-1338 b be named in honor of SOPHIE, in honor of a great LGBT+ influence," wrote Arroyo. "I want her name to be remembered and her influence to continue to flourish for many years to come."

A year and 95,216 signatures later, the asteroid 1980 RE1, discovered by Antonín Mrkos at the Kleť Observatory in the Czech Republic, has been given the permanent name Sophiexeon. The International Astronomical Union announced the name in volume 3 of their WGSBN Bulliten, noting SOPHIE’s influence as an electronic music pioneer “whose futuristic style changed the landscape of pop music in the early 21st century.”

“I was sadly not made aware of this naming until today, but we did it y'all!” wrote Arroyo on the original petition website. “Sophie has influence [sic] so many of us, and now she will forever be part of the cosmos. I thank every single one of you who signed and shared this petition.”

Upon launching, the petition was quickly endorsed by Charli XCX, SOPHIE’s longtime collaborator and close friend. "There are so many memories, so many small details, so many different views and incredible feelings and stories," wrote Charli in a heartfelt tribute last year. "It's impossible to summarize the journey I went on with Sophie. Even the most insignificant things felt enormous. I can't explain how I feel and I can't encapsulate what a unique person she was in one small social media post. I will honor Sophie in my own time personally, in my grief, through my memories, through my work, through writing things only I will read."

The corporeal may be gone, but SOPHIE lives on through her music, the lives she touched, and now as a celestial body. “I could be anything I want / Anyhow, anywhere, any place, anyone that I want,” she sings on “Immaterial Girl” and the sentiment still rings true.