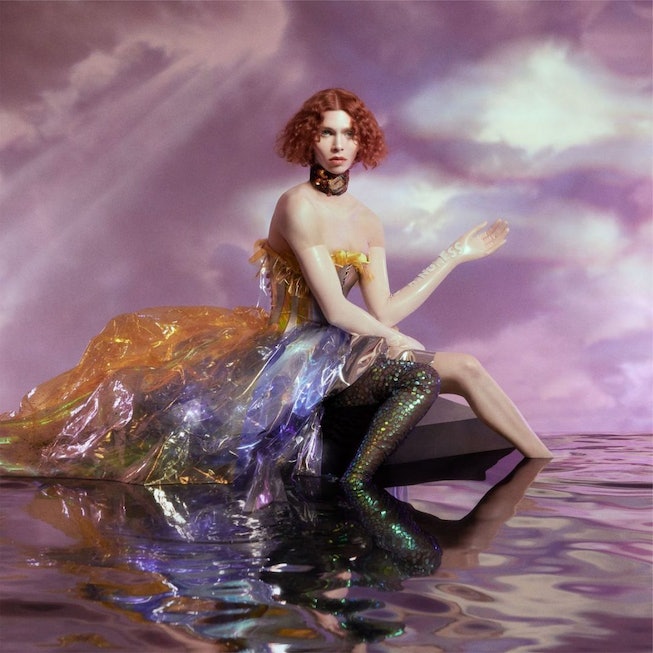 The loss of visionary electronic producer SOPHIE on January 30 is one that we'll feel for years to come. SOPHIE reimagined what pop music could be. She dismissed limits and ushered in a new era of hyperpop — synthetic, glittering, chaotic production that was avant-garde as hell.

The album art of her debut record Oil of Every Pearl's Un-Insides features an ethereal SOPHIE surrounded by water in what can only be described as a heavenly realm. The pale lavender, cloudy atmosphere of SOPHIE's world looks strikingly similar to TOI-1338 b, a planet discovered in the summer of 2019 by Wolf Cukier. This detail caught the eye of SOPHIE fan Christian Arroyo, who considered it a fitting way to honor SOPHIE's memory: Arroyo set up a petition for NASA to name the planet in honor of the late artist.

"I am requesting that TOI-1338 b be named in honor of SOPHIE, in honor of a great LGBT+ influence," wrote Arroyo. "I want her name to be remembered and her influence to continue to flourish for many years to come."

It's a touching gesture that's resonated with fans and collaborators far and wide. As of writing, the petition has over 13,000 signatures and even has the co-sign from SOPHIE's longtime collaborator and close friend, Charli XCX.

Charli wrote a heartfelt tribute to SOPHIE, calling her "an amazing person who completely changed my life."

"There are so many memories, so many small details, so many different views and incredible feelings and stories," she wrote. "It's impossible to summarize the journey I went on with Sophie. Even the most insignificant things felt enormous. I can't explain how I feel and I can't encapsulate what a unique person she was in one small social media post. I will honor Sophie in my own time personally, in my grief, through my memories, through my work, through writing things only I will read."

Sign the petition here, then listen to SOPHIE's most ground-breaking songs, preferably on repeat. As SOPHIE herself once said, "It's okay to cry."