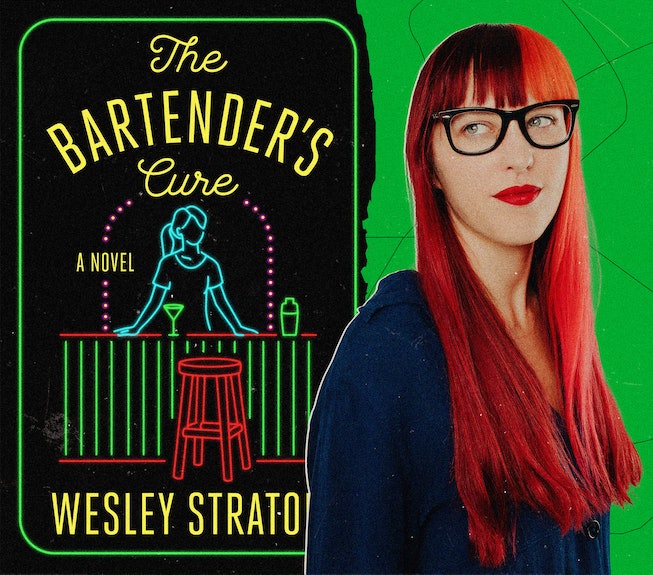 It’s an early summer night in Bushwick, and Wesley Straton is sitting across the bar from me. “It’s happy hour,” I tell her as she peruses a list of cocktails while I cut limes for garnish. I ask her things I’d ask anyone sitting in front of me at the bar at Sally Roots, the Caribbean-American restaurant and bar I started working at about a year ago: her hopes, her dreams, and whether or not she’d like a shot.

Straton is sitting in the opposite position the narrator of her debut novel The Bartender’s Cure takes for much of the book, which follows Samantha Fisher, a 20-something in crisis who defers law school for mental health reasons and ends up getting a job at “a true neighborhood bar” called Joe’s Apothecary in Brooklyn.

Samantha, like Straton, and like me, never planned to bartend. She went to Columbia, as she likes to remind the reader, and her plan is to go to Harvard. “How did any of us end up working in bars?” She writes in the first chapter “Because something marked us in our lives, or we marked ourselves as somehow unfit for the office, for the classroom, for the nine-to-five. Because we descended, and found that once we had drank the nectar of this particular netherworld, we could never go home. But I’m getting ahead of myself. For now, like so many before me, I am just looking for a job.”

I often ask myself the same question. Wondering how you “ended up” in the service industry is common in a culture that views service jobs as roles you “end up” in instead of ones you want – a belief that Straton pushes against in her novel.

“The service industry so often used as this shorthand for failure in our society, which is really frustrating, so I was really conscious of the fact that I wanted Sam to end up there,” Straton says. “People who are being looked down on for making these choices, I want them to see someone making these choices.”

Samantha wrestles with the preconceived notions she has about her life (i.e. 2016 #girlboss San Francisco) and how she reconciles that old self with her new life (messy, lost, in recovery for an eating disorder). It’s a coming of age artists’ novel, the kind where a protagonist has to shed everything they thought they knew, as well as find their creative voice. Only, Samantha’s art involves a cocktail shaker and simple syrup.

Early in the novel, Samantha describes seeing indie rock shows in San Francisco as a teenager as the only time she was “really fully inside of myself.” “A good bar shift does the same thing,” Straton writes. “Once I’ve found my rhythm, I ride it, high on the job well done, laughing with guests and coworkers, efficient and beloved. Becoming a vessel for something, some communal spirit of the night…So maybe it is less like attending a concert, and more like performing in one.”

I understand this feeling. Bartending, not unlike interviewing, is a performance, one in which personality is currency. You have to read people, sus out their psychological underpinnings, multitask, listen, smile, all while standing for 8-12 hours. For better or for worse, Straton knows this feeling intimately. She was a bartender for six years, first abroad, and then later in Brooklyn throughout her MFA program. It didn’t occur to her to write about bartending because she didn’t see a lot of bartenders in fiction until her adviser suggested it, which she now considers a “lightbulb moment.”

Straton recently wrote a list of memorable bartenders in fiction for Electric Lit, which she says was difficult because there are so few. But that’s changing: Half of her list came from novels written in the last year, including Yerba Buena by Nina LaCour, The Night Shift by Natalka Burian and Xochitl Gonzalez’s Olga Dies Dreaming.

“I wanted [the novel] to be for people who are bartenders who don’t get to see themselves in other things,” she says. “As the publishing industry gets a little more economically diverse, we start to see more perspectives.”

The Bartender’s Cure is not exactly a nightlife novel à la Marlowe Granados’ Happy Hour, nor is it a messy protagonist novel à la any Sally Rooney protagonist, but it juts up against both of those categories.

Adhering to a nontraditional plot structure, Samantha walks around Bed-Stuy eating cheap slices of pizza; wakes up blacked out in between her coworker and his wife; bops around to get free drinks at different bars where her friends work; cheats on her boyfriend with a bartender who makes a mean martini, and uses her library card voraciously. It’s a nightlife novel purely by the nature of the vocation. There’s no better feeling than going to someone else’s bar when you leave your own, and Straton captures the community that bars provide for a city — which is a greater value than a Narraganset tap or a whiskey pour— and has become especially important in a post-lockdown world.

“There’s a concept in urban planning of ‘the third place.’ Traditionally, that might have been your church or your community center, but we don’t really have that,” Straton says. “For better and for worse the bar ends up becoming that and we need that. We need those places.”

Now that we’ve 86ed many an office, the bar has become the second place too, with hoards of laptop-toting regulars drinking single glasses of chilled red as they catch up on emails. This concept plays out live in front of us. Regulars file in: Two roommates who live on the block and work at bars in Williamsburg stop in for happy hour drinks before their shifts, a sales rep from a liquor distribution company sucks down the last of a mojito, a woman with L Train Vintage shopping bags waits for her friend.

The Bartender’s Cure is out now on Macmillan.