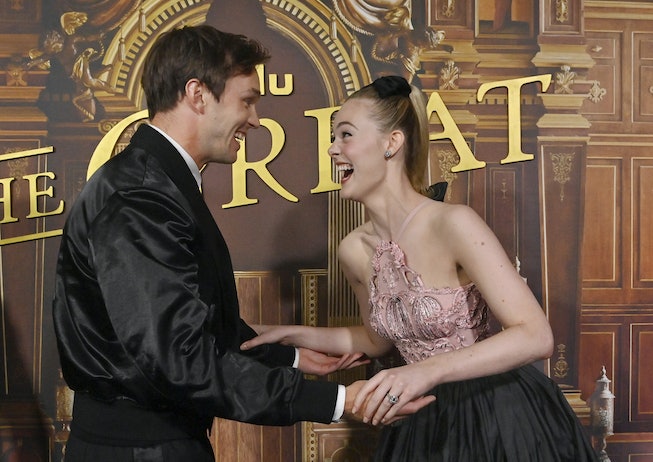 A hearty “huzzah!” to those who have been patiently waiting for the return of Hulu’s semi-accurate historical satire, The Great. The show’s second season is finally returning after nearly two years, and imperial Russia is in for a whirlwind as Empress Catherine schemes, fights, and flirts her way to becoming the country’s longest reigning female monarch. Historical accuracy takes the backseat much like in Season 1 — try this thing called a “library” for that — but if biting dialogue and some truly stunning costumes and beauty pique your interest, you’re in for a treat. See everything to know about the forthcoming season of The Great, below.

Get ready for more A-listers

Elle Fanning and Nicholas Hoult will reprise their roles as bickering monarchs Catherine and Peter, and The Great Season 2 extended an invite to Catherine’s mother, Princess consort Johanna, played by Gillian Anderson. The woman is a veteran at playing women enmeshed in governing bodies, and most recently played notorious girlboss and old bag of bones, Margaret Thatcher in The Crown, as well as Eleanor Roosevelt in the forthcoming anthology series, The First Lady. But none of these other women can touch Johanna Elisabeth of Holstein-Gottorp’s gowns, and that’s what period pieces are all about!

The Great Season 2 deals with Catherine’s coup d'etat against her husband, Peter.

Season 1 laid the groundwork for Catherine’s ultimate rise to power, and in Season 2, Catherine finally takes over the throne from Peter. Much to the chagrin of the Empress, who is also pregnant, pretty much everyone with an ounce of power stands in her way, from Russia’s clergy to her very own mother. But Russia will have its own Age of Enlightenment — especially because it’s one of the few, actual historical facts the satire includes.

Prepare for a sexed-up freak show

While The Great Season 1 was exactly chaste, Season 2 is bringing a new level of royal raunch. “Nothing is off limits,” according to Fanning. “We’re unfazed. The whole cast, we’re unfazed by anything.”

Gwilym Lee, who plays Grigor, also hinted at some of the debauchery to come, including a party complete with people mid-coitus and raccoons fighting in a log, and an impression of an elephant sucking him off. “That’s what the stage direction says! Then I do deep levels of research by looking at David Attenborough documentaries.” Well, huzzah, indeed.

Since Season 2 features a very pregnant Catherine trying to maintain her power, Fanning decided to prepare in a quasi-method: by watching a video of her mother giving birth to her older sister, Dakota. That alone already sounds gnarly, especially considering that Fanning’s went into labor sans medication: “She didn't have any drugs or anything. So it's scarred in my brain of what that's like.” Makes sense to me!

Fanning had to watch her sister’s birth video because hers doesn’t exist. “I was born during a tornado, so they couldn’t video when I was born because the hospital was in lockdown — which is very fitting, I think.”

The Great Season 2 trailer amps up the scheming

Oh, Catherine. You thought taking over Russia from a man who thinks it’s his divine right to rule was going to go smoothly? The trailer teases the incoming hijinx of Season 2, including political strategy, motherhood, and in true brute fashion, jokes about potential beheadings.

"You're calling yourself 'the Great?' Seems arrogant," Peter tells Catherine at her coronation. "It is if you're not great, but if you are, it is just calling things what they are," she retorts. And they’re back!

The Great Season 2 premieres on November 19.

All ten episodes will be available to stream on Hulu starting November 19.