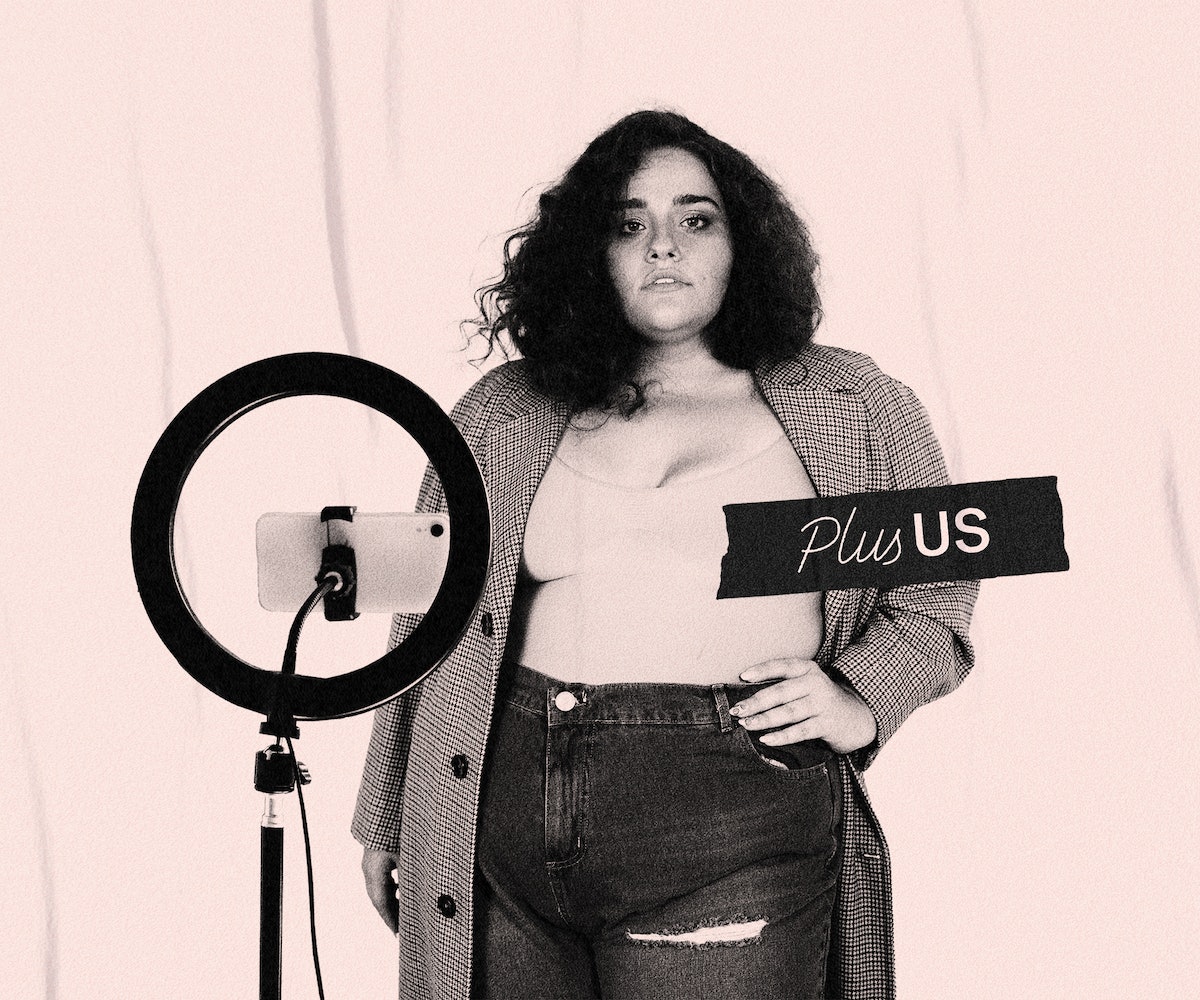 In NYLON’s bimonthly column Plus Us, writer Gianluca Russo explores the many ways in which fat people are discriminated against — both systematically and on an interpersonal level — in society today, and looks to open up difficult dialogue in order to provide support, advice, and resources to the community.

As TikTok emerged as the world’s favorite pastime during a two-year shutdown, it provided a newfound virtual community weaved together through viral dances, baking trends, and comedic clips that spur Vine-like energy. For plus-size creators, however, the app presents a new wave of challenges. Even more terrifying? A new tsunami of trolls to navigate for the most marginalized of users.

“I have never in my life seen [hateful comments] like this before,” says activist and model Saucye West. “Those viral moments that happen for fat folks get hit with a ton of hate. [As opposed to thin creators], a fat person can do anything and suddenly, people are pulling from the same pocket of insults.”

TikTok’s algorithm is what has set it apart from apps like Instagram that have begun to feel too mechanical. That very algorithm — on top of the app’s influx of fake and robotic accounts in use — also raises the opportunity for hateful vitriol.

As reported by Business Insider, a 2020 report found that TikTok’s algorithm censored users that were deemed “ugly, overweight, disabled, or poor.” This policy was allegedly in use as of late 2019, though ByteDance, the app’s China-based owner, claims this was not in place in the United States market and is no longer in use at the time of publication.

Even still, creators like West have found a double standard when it comes to violating the app’s community guidelines. Whereas videos of stars like Charli D'amelio in bikinis and skin-revealing clothing are left untouched, similar clips created by fat folks appear to be taken down almost immediately, as West — as well as other creators interviewed for this piece — recall on numerous occasions.

“For a while, almost all my videos were being reported, and I don't know if that was from TikTok itself, or I was being mass reported by folks who just did not want to see that content,” says creator and actor Nikki Garza. “The trolls and the massive amount of hate comments [are discouraging].”

In the two years since TikTok’s sudden surge in popularity, it’s become clear that the app is not properly designed to uplift plus-size creators — unless, similar to how the fashion industry operates, they fit a narrow beauty ideal, or the “perfect” plus body.

TikTok creators have largely been credited for the now-widespread usage of the term “mid-size,” a way to differentiate bodies that typically fall between a US size 8 and 12. The term itself is controversial within the plus-size community, as writer Jill Di Donato explains, “With over 150,000 posts on social media, the term mid-size has gained a lot of visibility. However, this isn’t necessarily a win, when some creators are literally sticking out their bellies to get in on the movement.”

Additionally, some have used the term to create a division between themselves and plus-size folk, not identifying with the term “fat” or wanting to be lumped into the community that exists higher on the weight spectrum.

“One of the biggest issues that I've seen on TikTok is the dilution of body positivity and the commandeering of it by people who are either the least marginalized, or people who are arguably just thin,” says Callie Richards of the account HotPinkandGlitter. “If you're trying to use mid-size to separate yourself from fat people, you're contributing to the problem.”

TikTok’s popularity has allowed creators to spoon feed self-love and body positivity to the app’s younger demographic. On one hand, this warms a new generation to the idea of body acceptance far earlier in life than many of us previously experienced, but the education seems to stop there.

For creators like West, that’s a problem. Because as body positivity has become increasingly commercialized, pulling further and further from its origins in Fat Acceptance, the less impact this movement makes on the individuals who need it most. Most specifically, as West notes: larger fat Black women and those who intersect with that identity.

“I really want to see this new generation get down and dirty with fat politics,” West says. “But I’m really enjoying seeing these young people coming up and being proud of who they are.”

It’s a Catch 22: Teens today are more aware of body positivity than ever before, but what exactly does body positivity mean to them, and how familiar are they with how damaging this world’s thin-first culture is on plus-size folk? Bikini confidence is great, but it fails to solve the oppression fat creators face, including but not limited to: medical fatphobia, workplace discrimination, and lack of opportunities for success.

Not all is bleak, however. The app has had a major impact on projecting body positivity and self-love to new heights. Many have found success in creating communities on the platform, even if it means finding unique ways to navigate the difficulties.

“TikTok lets your personality shine through more, which is great for community building,” says Richards. “[Showing that side] has helped a lot to create a safe space for people to vent and know that they're not the only ones experiencing things like insecurity or fatphobia or medical weight bias or difficulty shopping. All of those things are common experiences.”

The most isolating experiences can begin to feel universal when the app’s algorithm works to the benefit of those who crave it most. “I've had as young as eight year olds reach out to me and tell me how my content has helped them have language to start conversations with their own family about their bodies,” Garza says. “All the way up up [the age ladder] to a 68-year-old woman who reached out to say, ‘This is the first time where I'm starting to feel comfortable in my body.’”

TikTok is Gen Z’s Intro to Body Positivity course. While some may hit “Not Interested” on the lectures and seminars provided, others tune in with a listening ear. The app itself may not be the safe haven plus-size creators crave to divulge their personal experiences on such difficult and controversial subjects. But doing so has undeniably created a new frontier of baby changemakers.

Trolls will never reign triumphant when truth finds its way into the minds of our future trailblazers, if the almighty algorithm allows.

NEXT UP
Entertainment
Meet Andreas Metaxa, The Man Behind The Miami Jet-Setting Memes Of Supersnake
Fashion
Meet The Depop Seller Making Belts Out of Tiny Bonne Maman Jars
Culture
On The List (With Melissa Rich): How To Throw The Ultimate Apartment Party
Culture
Caroline Polachek In KNWLS & More Party Photos You Missed
Style + Culture, delivered straight to your inbox.