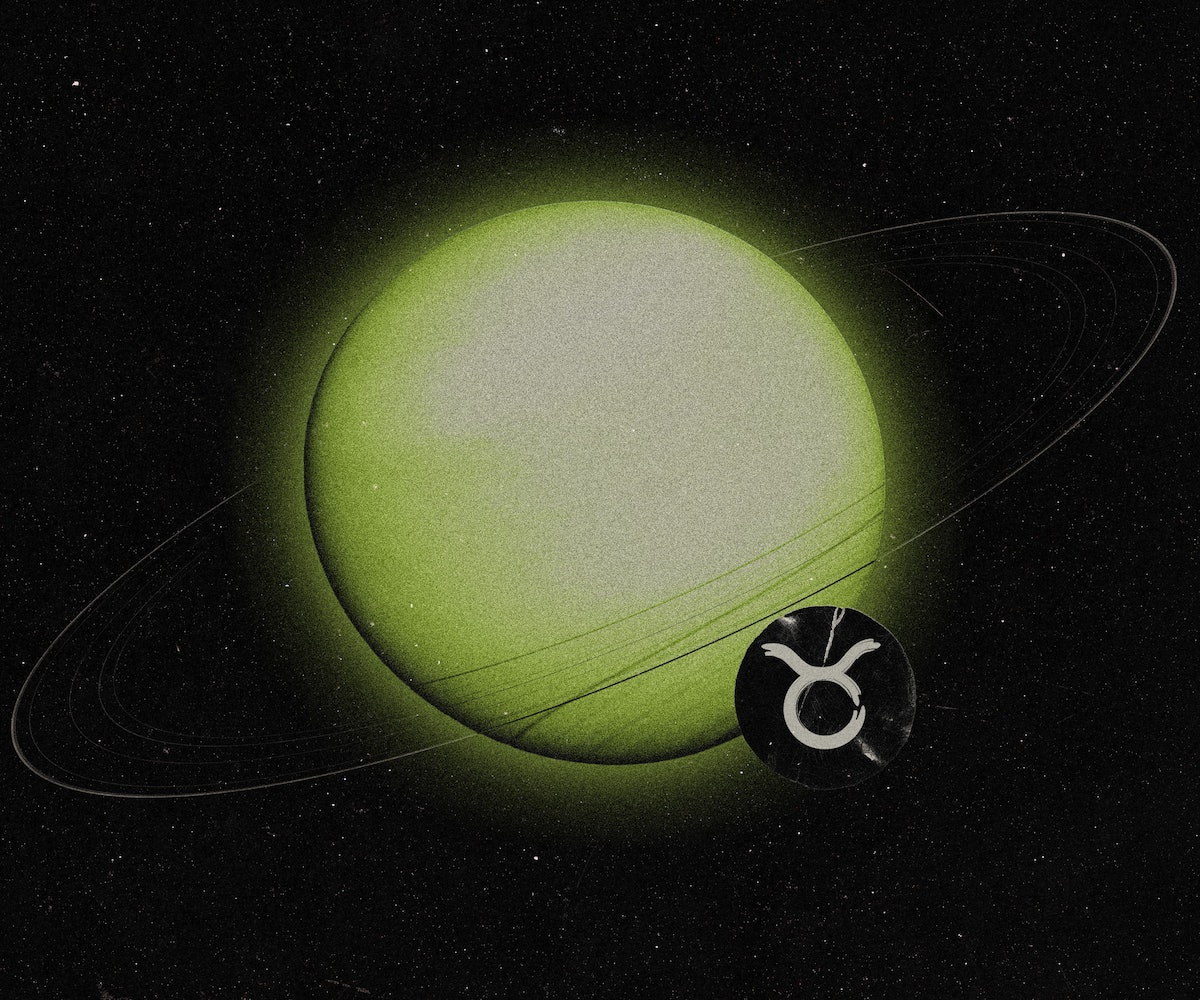 From 2018 through 2026, the great harbinger of change, Uranus, blasts through the sign most resistant to it, Taurus. Though this transit will occupy the better part of a decade, with retrogrades and dips into other signs, 2022 brings us to a precarious cliff on the event horizon of fate, with this year’s eclipses going down in Taurus. In real time, a volcano of repressed animus erupts, in the Taurean domains of sensuality, embodiment, and autonomy.

On July 31 and August 1, Uranus collides with Mars and the north node, and from September 15–October 23, Uranus comes close to a square, or confrontation, with Saturn in Aquarius. We’ve arrived at a jagged crossroads in the Taurean epic. Here’s how Uranus in Taurus will reshape your world beyond 2022.

For eons, our solar system was thought to be made of seven planets, with Saturn at the very end of the line. That all changed with the discovery of Uranus in 1781, a breakthrough in technology and consciousness that would forever alter our accepted notions of the cosmos. According to astrologer Ruby McCollister, the arrival of Uranus brought “the flourishing of science, technology, philosophy, literature, music, social opportunities and, in virtually every aspect of human life, exploded Western civilization toward liberation, freedom, and choice.”

Uranus, then, is associated with change, revolution, youth movements, and new technologies. Its domain, of course, could be nowhere else but Aquarius. This all sounds perfectly promising in theory, but, in the words of Magneto, “mankind has always feared what it does not understand.” And so, as in the myth of Prometheus delivering fire to the people, Uranian progress often catalyzes swift retribution from the old gods and their institutions. Through chaos comes reinvention, but who wouldn’t struggle to hold on to the world they knew?

For the sign that declares mi casa es mi casa, Uranus arrives like the big bad wolf to blow the house down. Anyone with prominent planets in Taurus will experience some mythic ego dissolution and surrender over this transit, as the planet of global progress rips off the straightjacket of myopia and willful obtuseness. But Taurus is also the sign of value, worth and money; of fertility and sexual embodiment; and of the healthy (or, as is often the case, megalomaniacal) cultivation of an ego. The body and the land, and their interconnected freedoms, are up for reinvention, revolution, and, of course, backlash.

Uranus’s last Taurus transit, from 1935–1942, coincided with the Great Depression and WWII, an age of dramatic scarcity and unprecedented power which uprooted Taurean themes in science, culture, and diplomacy. By the time Uranus made its mid-century transit, unsustainable farming practices had led to the dust bowl famine, a climate crisis which displaced millions. The Indian Rights Act and Social Security Act were first steps towards restitution and dignity towards all the country’s inhabitants.

The outbreak of WWII delivered a new type of woman, embodied by the brassy, Artemisian Taurus Katherine Hepburn and the scathing Bette Davis, and glamorized through the creation of some of modern culture’s most enduring characters: Lois Lane, Catwoman, and Wonder Woman. Unbound and unbossed, this new generation served a higher ethos than domestic bliss, blasting open a new and varied pantheon of archetypes.

Of course, Taurus is the sign of autonomy, explaining its high probability among divas and dictators. The last Uranian tour saw the rise of some of the 20th century’s definitive autocrats, including Mussolini and Hitler. As the Taurus Harry Truman dropped atomic bombs on Japan, so the human race would fail its Taurean calling of regenerating a fertile earth and instead answer to the destroyer, waiting to rise from the Scorpionic underworld. Our gift of choice — the bull’s crown jewel — had been abused. If one man could command nuclear power, then any person could be capable of godhood. Kingdoms fell, states were redrawn, and in the dissociative haze of mass consumption emerged something novel and intractable, craving unprecedented freedom: the individual.

As Uranus approaches the north node, the cycles of expansion and regression, progress and backlash, come into faster revolution. The discourse around the current climate crisis has narrowed in on the bull’s trenchant gluttony, entitlement and inability to change. Can we collectively achieve a Taurean impossibility: convincing human beings to compromise their entitlement for the greater good? Of course, for standards of human decency to improve, so that, say, our meat doesn’t have to be processed by underpaid, uninsured workers with no rights, Uranus will force Taurus to part with its creature comforts, and to question the consequences of a gentrified standard of living.

No discussion of Taurean themes would be complete without considering cold, hard cash, which, over this transit, undergoes a literal metamorphosis. Even if NFTs and crypto prove to be fads, the value of money will never be the same. Nor will previous assumptions around work and compensation. In the limited support people received from their leaded officials and employers during lockdown; the rise of digital entrepreneurship, self-merchandising, and self-published erotica through sites like OnlyFans; and in the growing public disinterest to return to office culture, Uranus has made individuals question why they’ve settled for the abuses of corporate life and capitalist labor, what their talents are worth, and how they believe they should be compensated.

Meanwhile, femininity and womanhood have undergone a rapid metamorphosis through the filters of capitalism and consumption. “Posting a pic, finna make me a profit,” raps Megan Thee Stallion, one of the breakout stars of the era, in "Thot Sh*t.” Megan may be the archangel of Uranus in Taurus, arriving, like Prometheus, to deliver a new fire to the masses: an unrestrained, insatiable embrace of pleasure, power, beauty, and capital. Seduction has always been a cash game; now everyone’s in on it.

Of course, as it blasts forward to progress, Uranus uncovers buried, atavistic resistance to change. The defamation trial against the Taurus Amber Heard, which raged during a Taurus stellium and the launch of the Taurus-Scorpio eclipse cycle, revealed the threat of a woman who doesn’t hew to the dominant standards of clean, uncomplicated morality. For depicting the complex reality of relationships and the ways that love, power, and abuse cannot be easily disentangled, Heard, like so many Taurus women before her, would be locked away in the dungeon of the Minotaur, bound as a bull sacrifice on the altar of virtue. .

The empire has struck back. But Taurus answers to a more ancient authority, unimpressed by the construction of pretty pyramids and systems of rulership. Real power, imbued into all bodies and expressed through the becoming of self and the creation of another, cannot be limited, literalized and compromised. “So much for free will,” Liz Greene writes, in The Astrology of Fate. “It exists, for the Platonist, only in the non-corporeal. The body, brimming with passion and the seeds of mortality, is full of fate.” What fate will our bodies lead us to next?

The core tenet of liberalism is that society is moving towards progress, a vision furthered by Aquarius. At stake under the legislation of so many deflated old dudes on the senate floor is the primal power of creation and the divine gift of becoming; what if, after all, the ancient, volcanic ore of the earth, and of its inhabitants, can’t be reconciled with a civil society at all? Taurus — the avatar of the crescent moon, fallopian tubes and pre-Judeo-Christian pagans — holds the fertility traditions of ages past, and as the state falls, so erupts a primeval, Dionysian rebellion of the body.

The Taurean promise of freedom is at stake, and conspiracy theorists, mass shooters and capital rioters have already made their warped case for it. Perhaps the rest of us, bound to the breast of the state, are missing the point. Prometheus delivered the fire of revolution to all humankind. 2021’s GameStop coup went down during a Uranus-Saturn square, and the Staten Island unionization against Amazon, however precarious and embattled, marked new possibilities for rebellion in a corpocracy. Previous Uranus in Taurus eras brought on the French Revolution, Boston Tea Party, and Indian revolts against the British. No more hoping for change from inside the system. It’s time to build a better one.

And it all begins with the individual. Over the past decade, the body has been exploited in the development of the personal “brand,” making each of us a unit of trade and consumption, in a rat race for followers and corporate funding. Perhaps that same spirit of self-embodiment, which makes each of us a vessel of the cinematic, erotic and fantastic, which has immortalized legendary Taurus divas like Cher, Grace Jones and Barbra Streisand, can be weaponized, or, at least, fully realized. What if the public personality each of us inhabits begins to live, in the eyes of its followers, not a life of meaningless consumption or — even worse — virtue signaling, but incandescent creative fulfillment and authentic transgression?

On the eve of the Uranus-Mars-north node collision, Beyonce drops her album Renaissance and the Taurus Lena Dunham releases her new film Sharp Stick. As the century’s most indelible feminist archetypes have demonstrated, every action of creation can shake the world, start a discourse, and make you a god — or an antichrist. Your body is a vessel of the rapture, and in the age of surveillance, it’s always being watched. Show them something they won’t forget.