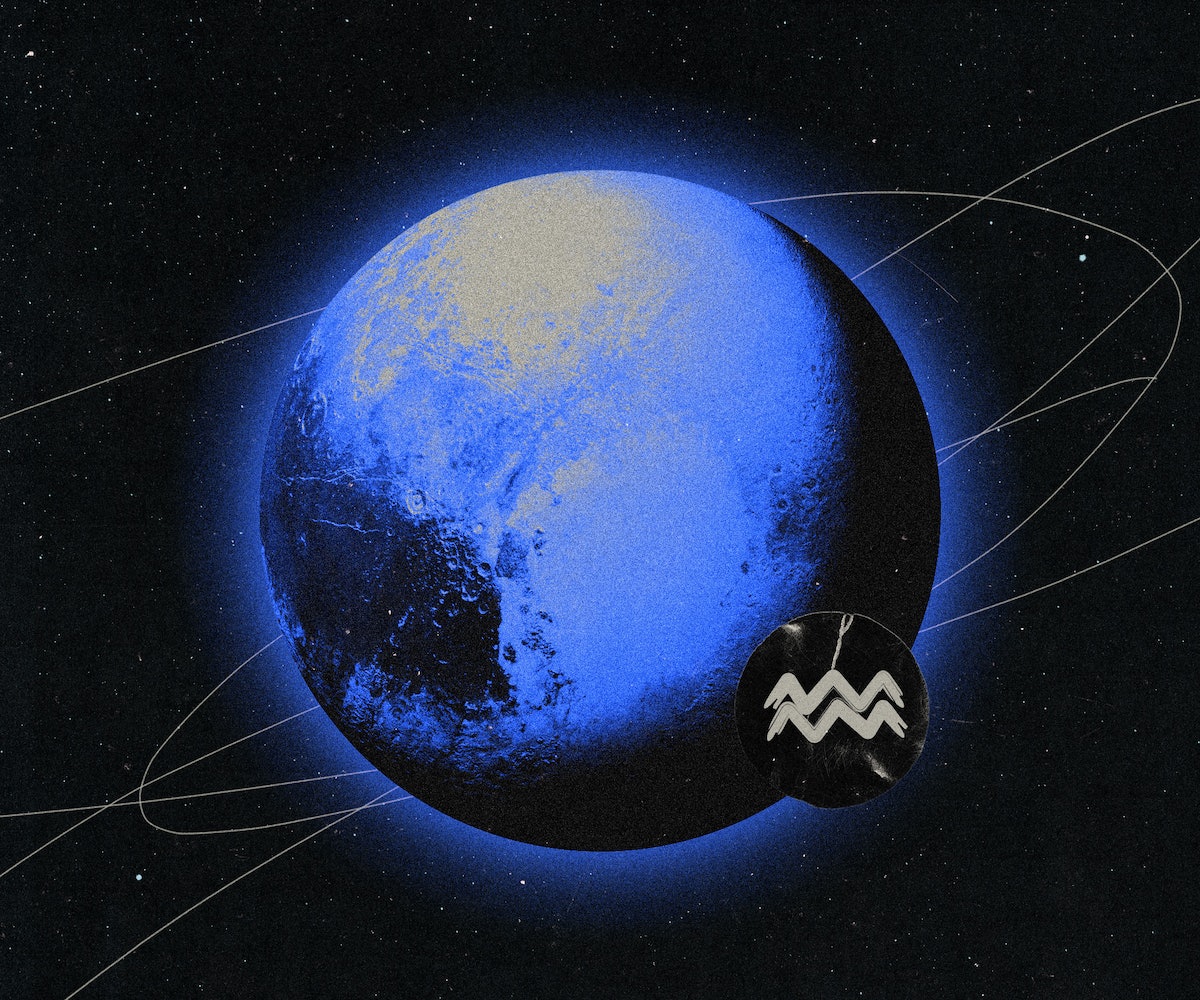 On March 23, 2023, the great planet Pluto lands in Aquarius for the first time since the 18th century. Spending over a decade in each sign, the dark master defines the big-picture transformations of eras and epochs; as Richard Tarnas explains in Cosmos & Psyche, Pluto rules “all that is titanic, potent, and massive.” Since 2008, Pluto has wrought chaos and awakening in Capricorn, transforming global power hierarchies irrevocably. Pluto will stop at 0 degrees in Aquarius from March through June, 2023, before a brief final tour of Capricorn. On January 21, 2024, Pluto will set up shop in Aquarius, uninterrupted, for a two-decade span. Here’s what this massive shift in consciousness spells out for the shape of things to come.

Discovered in 1930, Pluto is the final planet of our solar system and the farthest in distance from our sun. Because of its long orbit, Pluto takes about 12–30 years to move through a single sign; its effects, therefore, result cumulatively and culturally, rather than personally. Pluto is used as a marker of generational definition in astrology: the Boomers were born with Pluto in Leo (1939–1958), which saw the rise of deified world leaders, and the elevated ideal of so-called American “greatness;” Pluto in Libra (1971–1983) brought forth Gen X, who sought to tear down the Libran ideal of suburban stucco bliss; millennials came alive during Pluto’s transit through Scorpio (1983–1995), a period in which AIDS unleashed conservative cruelty and activist revolution, VHS pornography changed sex forever, and atomic terror thawed to new possibilities of liberation. Of course, Gen Z could only be born to Pluto in Sagittarius (1995–2009), and will reckon for years to come with the sign’s extreme ideals, spiritual curiosity, and conspiratorial thinking.

The word Pluto originally meant “riches,” and was used in ancient times as a superstitious moniker for Hades, God of the Underworld. Perhaps by blessing him with abundant wealth, those who spoke of him could avoid an early trip to his domain. And so the planet Pluto deals with the awakening or recovery of that which has been buried: secrets, inheritances, gold, or even atomic arsenals. At the end of our solar system, Pluto represents finality and fatality, and, as ruler of Scorpio, deals with the karmic mechanics of death and rebirth. Associated with the seductive rapture of Dionysus and the fury of the mother-destroyer Khali, Pluto’s transits deliver downfall, decimation, and, out of the ashes, awakened consciousness. As the ultimate agent of fate, Pluto’s corresponding effects cannot be reduced to moral relativism. Whatever chaos or devastation it brings are necessary for the sake of metamorphosis, and ultimately, destiny.

Pluto arrived in Capricorn, the sign of governance, rule and authority, in 2008. The same year saw the release of The Dark Knight, whose Capricornian themes would continue throughout Pluto’s 14-year tour of the sign: surveillance and corruption; chaos vs. order; and the burning down of economic security. By the time of the United States’ first Pluto Return, in February of 2022, America was weathering a public health crisis racial reckoning. As new technologies reshaped the world order at a speed beyond reckoning, and formerly reliable financial institutions went under, corporations like Disney doubled down on nostalgia and brand loyalty to keep control over their consumers. And as Capricorn always deals with generational power struggles, this era unleashed dramatic clashes between idealistic digital natives and their forebears from a truly different century. Progress has had its consequences.

PLUTO IN AQUARIUS: THE LAST TIME

Out from the cold grip of Capricorn comes the revolution, through Aquarius. Ruled by both Saturn (structure), and Uranus (change), Aquarius takes a big-picture view, contemplating the ethics, ideals, and systems required to ensure fairness for all. Astrologer Patrick Watson notes that Pluto’s last turn in Aquarius (1778–1798) brought with it sweeping changes in social order and public rights, including: the ratification of the American constitution, the Industrial Revolution, the Enlightenment, the publishing of The Vindication of the Rights of Women by Mary Wollstoncraft, and the French Revolution.

Aquarian triumphs always sound lovely and liberating — at first. But the water-bearer, as embodied by the overeager Aquarius Laura Dern on Enlightened, will pursue righteousness and revolution at all costs, unaware of the collateral damage. The French Revolution toppled a bloated monarchy, but its values of rigid nationalism now fail to integrate religious and ethnic differences. The Former Soviet Union is ruled by Aquarius, and in the rise and fall of communism we see how a vision for perfect equality can become an iron menace.

While Pluto roosts in Aquarius, several planets will move through Aries, the sign of war and aggression: Jupiter (2023); Saturn (2025–2028); and Neptune (2025–2039). Aries celebrates individual liberty, while Aquarius holds court over the theoretical, unforgiving in its one-size-fits-all ideals. See where this is headed? If it hasn’t already, neoliberalism will become its own Stalinism, while those who claim individual “freedoms” will become vigilantes and terrorists. The current cultural wars will likely become literal, reshaping political parties, borderlines, and identities.

Of course, this clash can be productive. Aries prizes singular points of view, and Aquarius unites ethos-driven communities. No two signs celebrate originality more than Aries and Aquarius, and this turbulent era may see the peak and crash of derivative cynicism, leading to a heroic resurrection of actual creativity and innovation. Those with points of view won’t get lost in the politically alorythmicized maelstrom, and can find new stages to share their visions. Perhaps war can be waged for the freedom of the avant-garde, in which control of intellectual properties and cultural influence is wrested from corporations and returned to anyone, even those who don’t have BFAs or abs. Jupiter in Aries has initiated the age of heroes. With Pluto in Aquarius, they may arrive in an optimistic new world.

Like the water bearer pouring out the stream of Piscean consciousness, Aquarius wields new technologies to disseminate information, wiring a transmission to all of humanity, like Professor Xavier’s Cerebro machine. Though the last twenty years have brought forth quantum leaps in technological evolution, it will not be until this transit that the dominant mediums of the century emerge. Freed from Capricorn’s grueling relationship with tradition and the past, Pluto can look forward while in Aquarius. No more trite complaints about how the world is going to end soon; as the children of Pluto in Sagittarius (Gen Z) take power, so spreads a revitalized sense of possibility, and opportunity to change.

At this moment, phones and social media are, by definition, tools of surveillance, advertising, and influence. As Pluto moves through Aquarius, our society will have to confront the literal plutocrats who own our streams of information — Washington Post owner Jeff Bezos and possible Twitter owner Elon Musk — and wrest control of our lives and politics from Mark Zuckerberg. Pluto is tied to themes of apocalypse, a word which originally meant revelation. If there was a breakdown in, say, cobalt mining in the Congo, which gives us our phone and car batteries, what would we learn about the ethics of our dependencies? Maybe a Y2K event, smashing all digital currencies, could help us reshape and reintegrate our platforms and currencies to be equal to all. What if our phones weren’t just for wasting time on the subway, but could help us reach our highest destiny? What gifts can technology bring forward to help humanity evolve for the better, and to unite as a single consciousness?

Two issues at the gushing heart of the current culture wars are gender identity and legal access to abortion. As is likely apparent, things will likely get worse before they get better. But Aquarius is not concerned with bodily autonomy, so much as with questions of what a human body is. In The Dialectic of Sex, feminist visionary Shulamith Firestone predicted a future in which childbirth and rearing could be machine-assisted, freeing women from the social expectations of their gender role. Welcome to the integrated world of Donna Haraway’s Cyborg Manifesto, in which our definition of self is enhanced by technology, not distorted by it. Her and I’m Your Man foresee real, loving human-A.I. romances, some version of which may redefine the current sexual sh*tshow we live in.

Of course, to arrive at a brave new world, Pluto will have to absolutely wreck the current one. If the bounty of technology is to be shared by the masses, then the dweebs of Silicon Valley — who command more wealth than Alexander the Great could ever have dreamed of — are in for an ugly reckoning. Post-humanism won’t be swallowed easily. In their feminist masterpiece Wonder Woman: Earth One, the Aquarius Grant Morrison depicts a forever utopia, in which education and opportunity are afforded to all people, but which can only come through loving submission to a great whole. See how easily that goes down.

Perhaps, out of the fall of globalization and nationhood can come some new and sustainable form of tribalism: world cliques uniting through technology and values, free to coalesce beyond artificial borders and states. It is likely that in Aquarius, Pluto will devastate those means of communication and social order which keep our species connected. But in the fallout of whatever Terminator 2, Y2K-redux is coming, in the ashes of nations, currencies, and genders, so begins a new shared paradigm. While the rest of us slog through the quotidian drip of daily life, the Aquarians have been preparing for the arrival of our new alien overlords, or the birth of a machine-messiah Muad’dib, “a mind powerful enough to bridge space and time, past and future,” as Lady Jessica describes, in Dune, “who can help us into a better future.” It won’t be long now.

NEXT UP
Astrology
Get To Know Aquarius, The Certified Freak Of The Zodiac
Astrology
January 2023’s New Moon In Aquarius Is All About The Big Picture
Astrology
Your February 2023 Horoscope Is A Breath Of Fresh Air
Astrology
Your Natal Mercury Placement In Astrology, Explained
Style + Culture, delivered straight to your inbox.