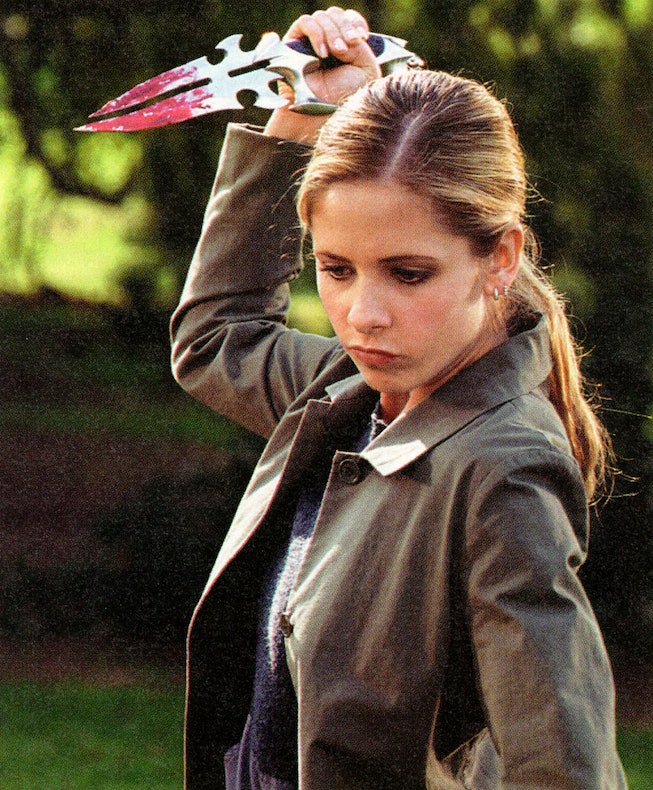 It’s been about a decade since vampire mania first took over popular culture thanks to Twilight, scandalizing a fan fiction generation of preteens who spent weekends under the covers reading about the, um, unbalanced dynamics of Bella Swan and her 104-year-old tortured vampire boyfriend, Edward. Or maybe, chaste love wasn't your thing and you watched any number of other vampire shows that dominated the early 2010s, like HBO’s True Blood or the CW’s Vampire Diaries. (Shoutout to Teen Wolf, which never reached the same cultural cachet as any of the previously mentioned titles because it decided to be a dark horse and shed light on the untold stories of teen werewolves, instead of the more popular, supposedly sexier vampires.)

Buffy Summers has been making vampires actually cool — and live in fear! — since 1997, but what is the chosen one supposed to do when all she wants it to be a normal girl without superhero-level strength and a cosmic duty to protect innocents from immortal freaks? If you haven’t watched this iconic series, there’s no better time to start. Expect witty dialogue, compelling character arcs, and the wackiest 90s wardrobe stylings you could possibly imagine. (Hulu)

In this stylish Western-horror-slasher film, a cowboy meets a woman at a bar who turns out to be a vampire. She bites him on the neck and the cowboy has to leave everything he knows to join the woman and her roving gang of vampires — before ultimately deciding which world he wants to be a part of. Sounds like...the plot of a lot of today’s vampire movies! (Amazon Prime)

In her breakout performance, a baby-faced Kirsten Dunst plays a child vampire raised by vampires in the 1800s by her adoptive vampire fathers, Brad Pitt and Tom Cruise. It’s essentially a period piece with tormented immortals! (Amazon Prime)

Edward. Bella. Jacob. Love triangle. Robert Pattinson in Ray Bans. “You better hold on tight, spider monkey.” Forks, Washington. “Where the hell have you been, loca?” I really don’t need to explain this one, but all five movies are streaming now, which you know if you’ve been on any kind of social media lately, thanks to the loyal and extremely vocal Twi-hard community. (Netflix)

In this salacious HBO show, it’s been two years since a synthetic blood invention allowed vampires to live in the real world, and guess what? It’s messy! They’re fighting for equal rights and assimilation, and Sookie, a small town Louisiana waitress falls in love with a 173-year-old vampire. Predictably, sh*t gets crazy! Side note: How cute are Anna Paquin’s gap teeth? (HBO Max)

This CW show ran for a whopping eight seasons and although I watched it for a year in my dorm room freshman year, I can’t remember a single thing that happens in this show. But the YouTube goddesses tell me it’s basically Twilight: girl meets boy, boy is a little intense, girl notices boy doesn’t age nor get hurt and disappears at inopportune moments, boy confesses to being a vampire whose obsessed with her. A tale as old as time! (Netflix)

Tilda Swinton and Tom Hiddleston play an impossibly chic vampire couple who have been together for centuries in this moody Jim Jarmusch film. They figured out how to live without harming humans, getting their blood from suppliers instead, but their artful, intentional way of life gets threatened when Swinton’s younger sister comes into town from L.A., hungry for blood. Family drama is still a wrecking ball, even hundreds of years into the undead. (Criterion, Amazon Prime)