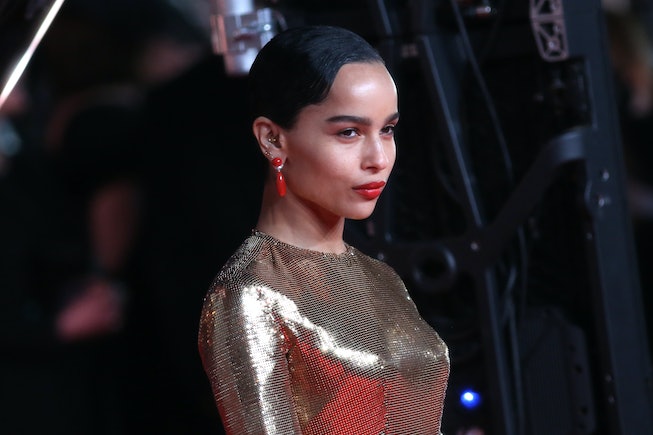 Today in Zoë Kravitz news (which, let’s be honest, is basically a form of breaking news), it’s been announced that the queen of self-effacing cool will star in an upcoming animated series called “Phatty Patty,” written by India Sage Wilson of CW’s “Dynasty.”

According to Deadline, the show is based on Wilson’s life as a biracial girl growing up in a primarily white community in the early 2000s whose dreams are burst when she finds out Mick Jagger isn’t her dad (it happens to the best of us!). Get ready to mine the show for fashion inspiration, as its set in the Candie’s Britney-Christina-body glitter era of culture. Or in the meantime, you can just watch Olivia Rodrigo’s new music video for “Brutal.”

Will Kravitz be able to tap into the emotional devastation of finding out your dad isn’t a rock star when her dad is a rockstar? We’ll see, but we think she’s up to the challenge. The series follows Patty’s life starting in fourth grade, and while Kravtiz IRL could probably play as young as 17 if she had to, we’re curious to hear how she makes her lower-register, 32-year-old voice sound like a 10-year-old.

In addition to Kravitz, the project has some major star power behind it, as its being produced by Will Smith and Jada Smith’s Westbrook Studios. No word yet on which network the show will land, but according to Deadline, it will be shopped around to streaming platforms this week.

Kravitz is pretty busy right now — not just riding on the pegs of her maybe boyfriend Channing Tatum’s BMX bike through the East Village, but is also starring as Catwoman in the 2022 Batman remake. (A casting choice we aren’t worthy of, but is the only way to ensure that I go see a Batman remake.). She’s also starring in the Steven Soderbergh-directed HBO Max feature Kimi, about an agorophobic tech worker who discovers a crime, which started shooting in the spring. She also co-wrote and is directing Pussy Island, a genre thriller about a young waitress who sets her eyes on a handsome tech mogul, played by Channing Tatum, and eventually gets sucked into his world. All this work and she still has time to party on a rooftop with Dave Chappell for his birthday? We want whatever she has!