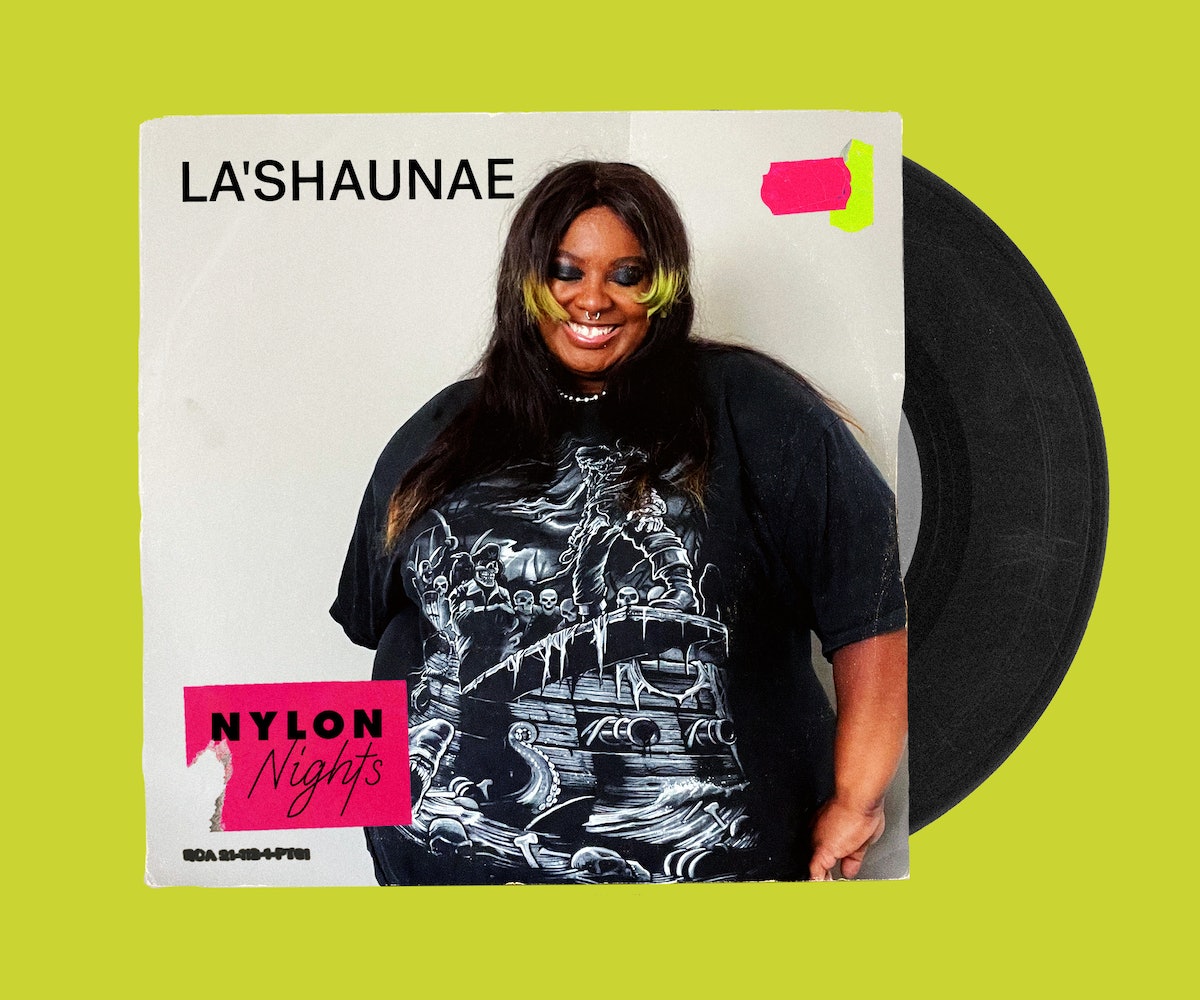 Going out? Need a playlist? Then NYLON’s NYLON Nights playlist is here for you. Each month we invite a guest DJ to curate an exclusive playlist that will keep you going from pre- to post-game. For July 2022, model La’Shaunae schools us on her favorite underground emo-rap hits.

When model La’Shaunae Steward isn’t covering magazines or posing for brands like Parade or Lizzo’s Yitty, she’s moonlighting as a musical curator of sorts. If you follow the South Carolina influencer and content creator on Instagram, you’ll know how strong her passion for emo and underground rap is. Alongside nihilistic memes, immaculate OOTDs, and the occasional sh*tposts that make-up her grid, you’ll also find screenshots of what she’s been spinning recently: a song from the reclusive, cult cloud-rap musician Corbin; something from Swedish Drain Gang CEO Bladee; meme allusions to 100 gecs and ‘90s rapper Master P. Lately, Steward’s enthusiasm and keen ear for that scene has landed her gigs curating mixes for global radio platform NTS. Today, she lends her discerning ear to our July NYLON Nights playlist, where she’s schooling us on all her favorite underground emo-rap hits.

With selections from beloved alt-rap pioneers Yung Lean, Black Kray, Lil Ugly Mane, Bladee, Corbin, and more, her playlist could be seen as a best-ofs for the genre. The atmosphere she’s concocting is a chilly and hallucinatory one, prime for soundtracking those long, stretches of summer night where anything and everything can happen. In one memorable moment from the playlist, Lil Ugly Mane’s jazzy, horror serenade, “Serious Shit” follows Idontknowjeffrey’s ominous piano-led confession “I Remember,” and precedes Germ’s darkly hype party starter “Han Solo” — a three-song showcase of the wide versatility of rap’s rich and flourishing underground. Steward would know, since she’s grown up with this music. “I was in the 8th or 9th grade when I first heard this and it’s definitely been my anthem ever since,” she writes of Amber London’s sinister classic “Choppa Got Dat Ass Shaking Like A Hoe.”

Below, stream Steward’s NYLON Nights playlist for your next nocturnal outing. Read on for her commentary about each of the songs she picked.

Unpopular opinion I feel, but this was a great album. This song gives off SSX Tricky Tokyo Megaplex vibes.

Definitely top-tier for Bones. This entire FromBeyondTheGrave album makes me want to walk through a cemetery at 3 a.m.

Honestly, just hard. The big boys in the underground scene are the hardest and here’s proof.

Noisy and catchy. Put me in a room with another math rock fan and I’m folding.

One of my talented best friends. This EP is so exciting. This song is like Smash Mouth’s “All Star” but a lot hotter and a lot better.

Xavier at his smoothest. One of my favorite smoke sesh tunes.

SickboyRari an underground top 5 definitely. “Hood Angels” is really a classic and reminds me of the hood where I grew up.

Definitely in my top 3 favorite underground rappers. Definitely a problematic favorite. Every song is catchy and the producers are insanely hard.

Another top 3 for underground for me. If jump scare were a music genre it would be this.

The name says it all.

“Choppa Got Dat Ass Shaking Like A Hoe” - Amber London

Underground queen. I was in the 8th or 9th grade when I first heard this and it’s definitely been my anthem ever since.

Okay, for real, I listened to this tape intended as a joke because of the “Gimme Head” track. but this whole tape is actually so hard.

“Get Off My Swag” - Babyxsosa

The blueprints get it.

This song sounds like a really good dream I can’t remember.

I love Gangsta Blac. This tape is one of my underground favorites.