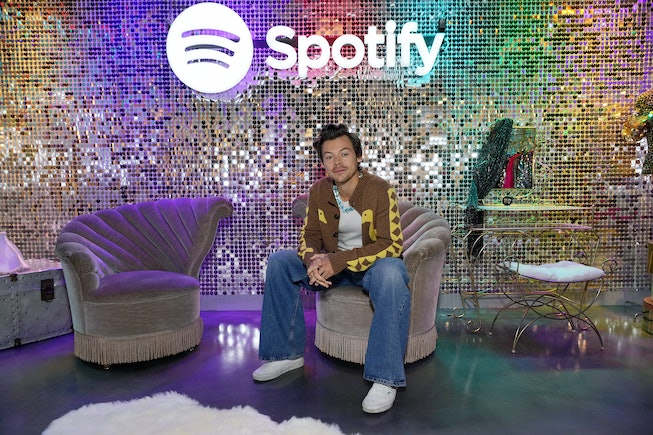 Harry Styles' third-studio album Harry’s House dropped at midnight and nearly broke the internet. Fans have devoured the record track by track, and, from the looks of things, it’s shaping up to be a hit for the British singer.

In her review of Harry’s House for NYLON, Margaret Farrell writes, “Styles eschews the sequined grandiosity that defined Fine Line and delivers his most disarming and befuddling project yet. There’s scatting. There’s cocaine. There’s lots of sex. It’s a project that nods to Styles’ admiration for rock ‘n’ roll legends Prince and David Bowie without sounding like he’s trying to travel back in time to the glory days of glam rock or Laurel Canyon. The sounds and subjects explored are vast, illustrating Styles is at his most free and creatively open.”

On Thursday, May 20th, Spotify hosted an album release party for Harry’s House and invited Style’s top 150 listeners to celebrate. Look no further for a breakdown of the intimate event:

When: Thursday, May 19th

Who: Harry and more than 100 of his most dedicated fans

Why: To celebrate the release of Style’s third studio album, Harry’s House

The Vibe: When guests arrived at the venue, they were given a key to “Harry’s House.” Inside there was a garden-themed party designed with a partial grass floor and stunning flower arrangements. The room was divided up into sections, where party-goers could try garden-themed drinks, grab snacks at a giant charcuterie board, try on sequined clothes, and paint an “As it Was” themed mural.

After handing in their cellphones, guests were invited to attend a silent disco and listen to five tracks from Harry’s House ahead of its release. Before the night was over Styles made a surprise appearance to thank everyone for their support, and shocked fans with tickets to his live show.

Overheard: “It’s my favorite thing I’ve ever made.” - Styles, on creating Harry’s House

Getty
NEXT UP
Culture
Caroline Polachek In KNWLS & More Party Photos You Missed
Nylon Nights
Backstage with UNI and the Urchin’s Charlotte Kemp Muhl and Jack James Busa
Culture
On The List (With Melissa Rich): How To Throw The Ultimate Apartment Party
Nylon Nights
How Renzo Rosso Turned The Pelican Hotel Into A Miami Must-Stay
Style + Culture, delivered straight to your inbox.