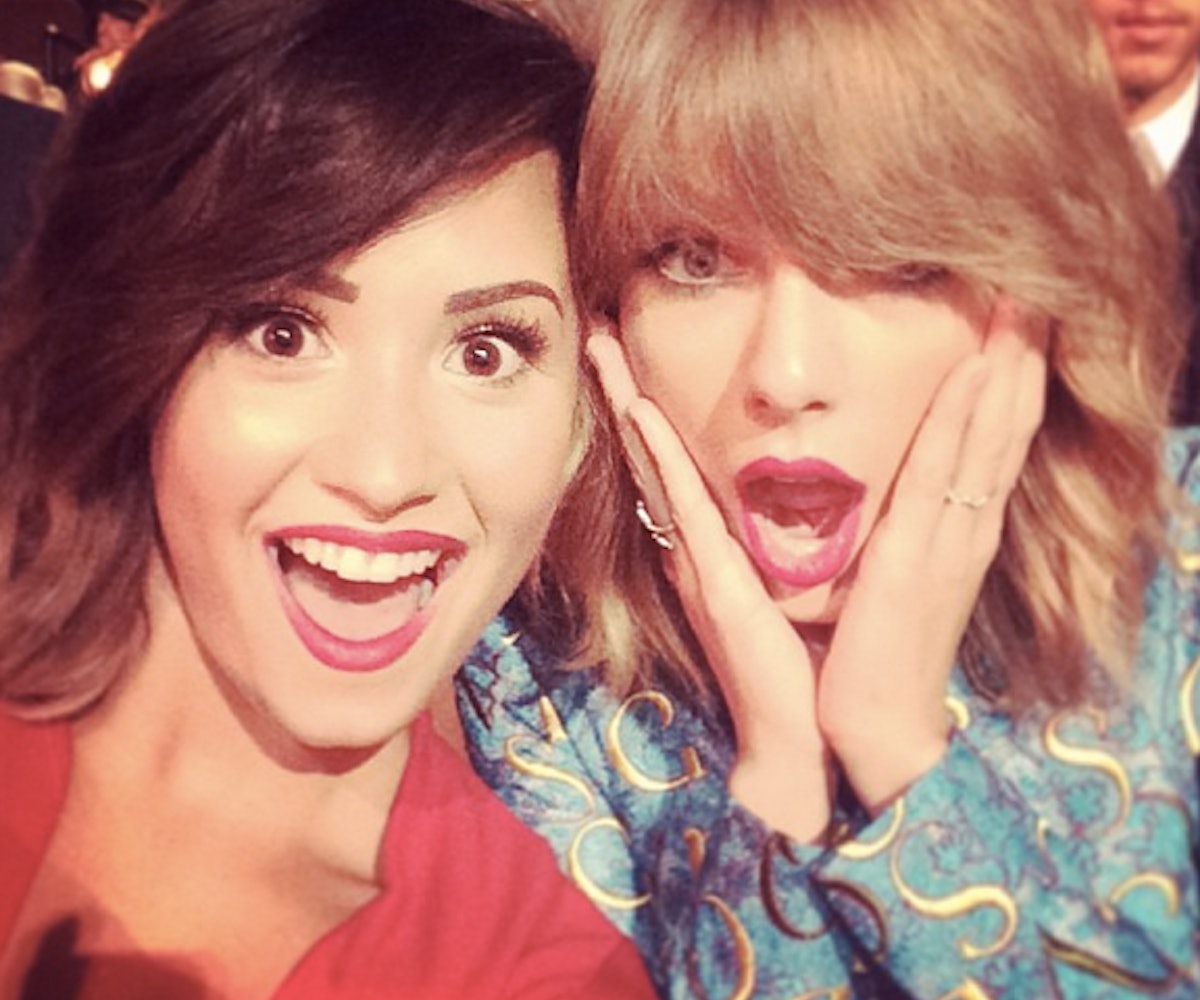 Since news broke that a New York Supreme Court judge refused to free Kesha from her contract with Sony and her alleged abuser Dr. Luke, no one has been more vocal in their support for the beleaguered pop star than Demi Lovato. The curious thing about Lovato's message however, was how quickly it shifted focus from that of Kesha's plight, to the perceived silence of Lovato's peers. After Lovato called out "self-proclaimed feminists" for not backing Kesha, many observers took the subtweet as a direct shot at Taylor Swift.

It was an odd move from Lovato, not because she didn't have a point—she's not the first person to call out Swift for what many perceive as her own brand of self-serving feminism—but because it diluted her original message. So when Swift announced that she was donating $250,000 to help with Kesha's legal bills, all eyes turned to Lovato. Would she issue a public mea culpa and commend Swift for her power move?

Instead, Lovato went in even harder on Swift, tweeting, "Take something to Capitol Hill or actually speak out about something and then I'll be impressed." If Lovato's support for Kesha veered off course before, well now it had totally fallen off the map. When some fans pointed out that Lovato had turned the focus from Kesha to herself, Lovato promptly exploded. "How the f--k am I making this about myself," she wrote on Instagram. "At least I'm talking about it. Not everyone has 250k to just give to people. Would love to but I didn't grow up with money and def haven't made as much as her. At least I speak up about s--t that's uncomfortable to talk about rather than trying to be politically correct 24/7."

When a Taylor Swift fan criticzed Lovato's comments on Instagram, she continued to defend herself while passive-aggressively condemning Swift and her donation. "There's no 'rivalry' I just give more f--ks than other people and would rather start a dialogue ABOUT WOMEN COMING FORWARD ABOUT BEING RAPED than throw money at one person," she wrote. "Didn't shade Taylor. If you take it that way than fine. I'm just tired of seeing women use 'women empowerment' and 'feminism' to further brands without actually being the ones that have the uncomfortable conversations. I get shade and I don't give a f--k because someone has to be the one to take it. At least I'm getting my hands dirty."

Whether or not Lovato agrees with Swift's methods, criticizing them serves no real purpose. This point was only highlighted when news outlets leapt all over the possibility of a rift between Swift and Lovato, reducing Kesha's story into a footnote. Lovato, perhaps realizing the error of her ways, quickly took to Instagram to clarify her comments.

"As most people know, I tend to get fired up about the things I believe in, and although my heart and intentions are always in the right place, unfortunately sometimes my passion gets the best of me and causes me to say things that I probably shouldn't say," she wrote underneath an infopgraphic about sexual assault. "And when doing so takes away from the real reason I am speaking up in the first place. Our focus should be on the topic of victims of sexual and physical abuse being afraid to come forward with their stories. They're more likely to face retaliation and harassment than to see justice being serviced. Especially women."