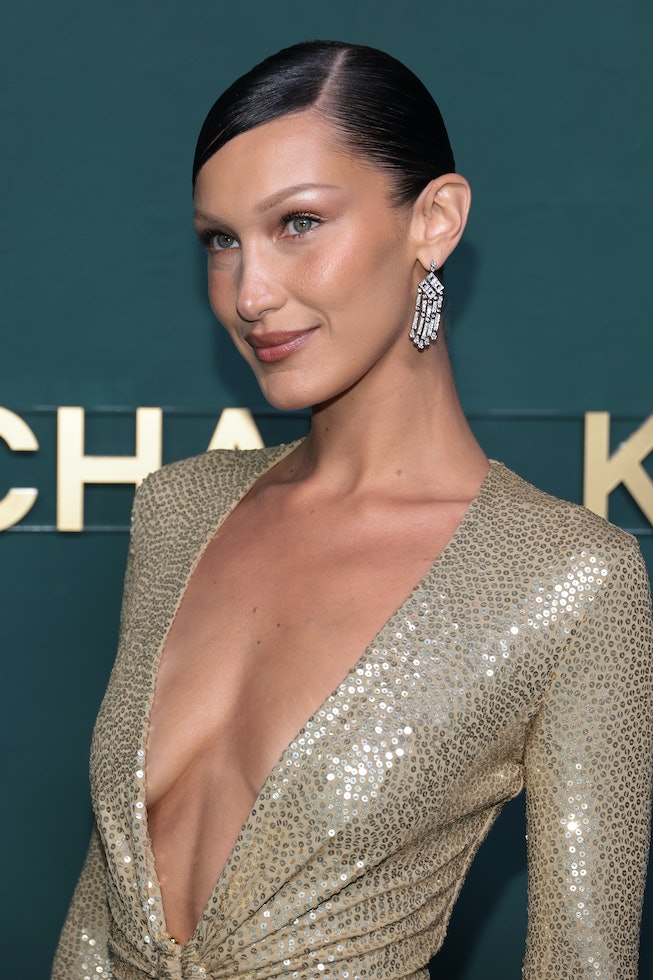 At this point, everything Bella Hadid wears or does immediately becomes a trend. Whether it’s platform UGG boots, headbands, heavy side bangs, or exposed underwear, there’s no look that’s too out-there or unexpected, and where Hadid leads, others will follow. But, for how often the model changes up her fashion sensibility and her hair styles, she’s known for being an iconic brunette over the course of her modeling career. Although her signature shade of “expensive brunette” has already created a stir in the beauty world, Hadid is about to cause many to run to the salon, as she just went for a major hair color change up.

As of December 18, it looks like Bella is entering her blonde era. The model took to her Instagram stories to reveal a brand new look with her hair dyed a warm honey blonde. In the video, she smiles and blows a kiss to the camera, her hair casually styled with a messy part. Her brows also appear to be lightened to match her new hair shade. She captioned the video showing off her new blonde hair with small text saying, “feeling a little better & a little blonder 🐰”.

Hadid’s dark hair has long been her identifier, especially in her family of models, including Gigi and Anwar who are generally loyal to their blonde roots. In a 2016 interview with Allure, Bella spoke about their choice to be differentiated by her hair color: “I just have a darker personality. And my sister being blonde and me being brunette, it's a good separation," she said. "I put a blonde wig on and think it would be fun to go back, but I'm happy with my hair.”

Nearly seven years after her Allure interview, Hadid has decided it’s finally her time for a blonde revival. Her honey-toned shade is particularly on trend for 2023, when warm-toned and golden blondes are expected to be more popular than the ash and platinum shades of previous seasons. No matter what, it looks like Hadid’s trendsetting ways show no sign of slowing down — expect to see many more copycat blondes in the new year.

NEXT UP
Beauty
Bella Hadid’s Clip-less Updo Is Going Viral On TikTok
Beauty
Megan Fox Is Completely Transformed By A New Blonde Bob
Beauty
Storm Reid Tries Out A Y2K Girl Band-Favorite Hair Trend
Beauty
No One Does #PamCore Beauty Better Than Pamela Anderson, Herself
Style + Culture, delivered straight to your inbox.