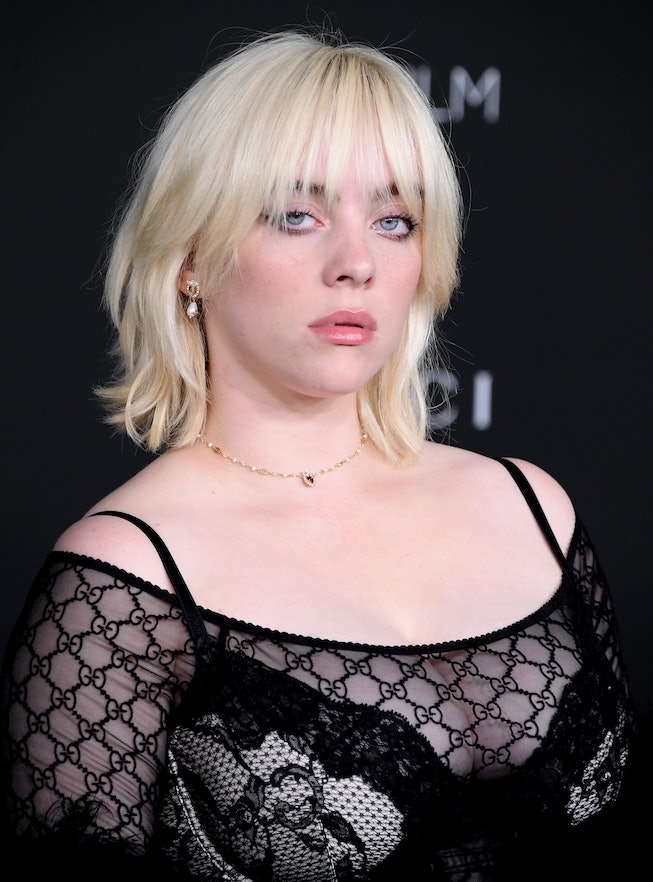 Another day, another Billie Eilish hair change. The artist has previously tried just about every hair color (from electric green roots to platinum blonde to a chocolate brown), all while chopping her hair shorter and shorter and getting bangs. Now, Billie has gone back to her previous roots (well, not literally her roots), by dying her hair jet black yet again—although this time, committing to a single shade, without the neon accents.

Billie debuted her new hair on her Instagram yesterday, posting a masked plane selfie with the caption “⬛️” followed by the comment “she’s back.” She also posted a shot with pigtails in her story, with the question “did you miss me?” It sure seems like she missed having her dark and dramatic hair after a long stint as a Marilyn blonde. Along with new jet black hair, the “Ocean Eyes” singer is also sporting a shorter and more blunt fringe, cropped from her previously long eyelash-skimming bangs. Her new bangs pair perfectly with the face-framing blunt layers she’s been rocking for months on her now-lob.

Billie is no stranger to shocking and delighting her fans with frequent bold hair changes. In her earliest days on the scene, she had bleached white-gray hair that she eventually tinted a brackish blue-gray, before she took to even more extreme shades. In 2018, Eilish had cerulean blue hair and by 2019, she officially went to the dark side when she started wearing the look she became best known for. Inky-black hair with electric lime green roots became her signature style as she rose to superstardom and made her entirely recognizable by hair color alone.

While Billie has been a chocolatey brunette since the end of last year (which she also posted with her now hair tagline “miss me”), her fans are loving her switch back to black. “Back to 2019,” one person commented under the Instagram post. “BLACK HAIR SUPREMACYYYYY,” wrote another. While we’re in agreement that black hair might be Billie’s most iconic shade, we’re also aware that if there’s one thing we’re sure of it’s that she loves keeping everyone on their toes for her next look. She even secretly had red hair for a week in 2021. Needless to say, we can’t wait to see what Billie does next—neon roots perhaps.

NEXT UP
Beauty
Megan Fox Is Completely Transformed By A New Blonde Bob
Beauty
Kylie Jenner Is Bringing 1920 Finger Waves to the 2020s
Beauty
Bella Hadid’s Clip-less Updo Is Going Viral On TikTok
Beauty
Dua Lipa’s ’90s Updo Is Hair Inspo For Your Next Night Out
Style + Culture, delivered straight to your inbox.