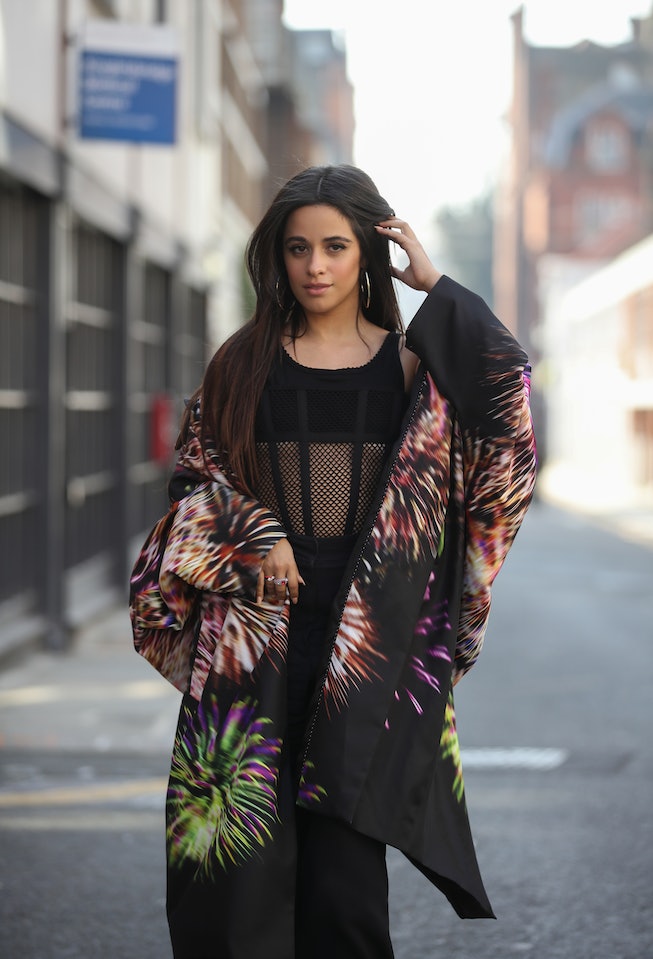 Camila Cabello’s signature long brown hair just got a remix. Wearing her hair in soft bending waves, the “Señorita” singer debuted face-framing hidden highlights during an appearance on NBC’s Today show on April 12. But first, we got a preview of the new look during her Instagram live yesterday before the show aired. In the live video, Cabello was flicking her hair back off her face to reveal new lightened sections in the under layers her hair and around her face.

A nod to the chunky highlights and under layer lowlights trends of the 2000s, Cabello’s new hair color look, falls somewhere in between, with thick sections of her hair dyed a lighter, warmer shade of brunette, but only visible from certain angles. She debuted her new hair on the Today show wearing an outfit that also referenced the 2000s— Britney Spears' iconic denim-on-denim-on-denim ensemble from the 2001 American Music Awards. Layering matching jeans, a denim corset, denim gloves, and a bedazzled Diesel trench, the complete look was a Y2K dream.

Cabello’s new hair further revealed itself as she performed on stage and the windswept her hair back to show the lighter layers. While the result is subtle and doesn’t require an all-over dye job, it still lightens up the overall look of her hair, while also hopping on the two-tone hair trend for spring. With celebrities like Bella Hadid and Jackie Aina also recently rocking two-toned face-framing highlights, we see this low-maintenance trend taking over this year.

Other two-toned hairstyles, like chunky highlights and reverse ombre, also have the approval of celebrities like Miley Cyrus and Dua Lipa, so the power of two-toned hair is only gaining steam. With Cabello clearly a fan of Britney’s 2000s style, we can only hope the singer will lean further into Y2K two-toned hair inspiration and opt for more streaks. Brighter blonde perhaps? Either way, this subtle makeover is going on our summer 2022 mood board.

NEXT UP
Beauty
No One Does #PamCore Beauty Better Than Pamela Anderson, Herself
Beauty
Dua Lipa’s ’90s Updo Is Hair Inspo For Your Next Night Out
Beauty
The Best Beauty Looks From The 2023 Grammy Awards
Beauty
Megan Fox Is Completely Transformed By A New Blonde Bob
Style + Culture, delivered straight to your inbox.