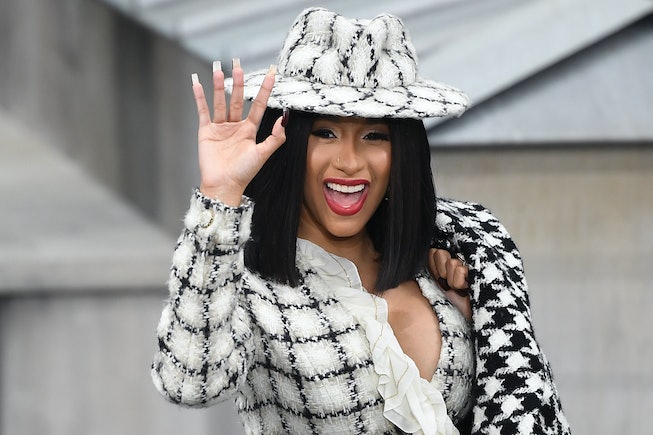 In what truly seems like an impossible feat, Cardi B just debuted one of her most inventive hairstyles ever. In a year that's already included multiple colors changes, as well as a ponytail imprinted with the Louis Vuitton logo, the rapper tried a style filled with colorful details and gravity-defying capabilities.

On Wednesday, August 25, Cardi B chronicled the three-hour task of turning her hair into hearts. Sharing some of the styling process on her Instagram Story, the "WAP" performer captured as her once normal pink pigtails were turned into two sculptural hearts.

Sharing numerous selfies throughout the night, Cardi gave fans a look at the style from multiple angles, ensuring followers didn't miss a single braided detail. In a video posted to her Instagram, she asked followers, "Ya like my hair ?" The video provided a closer look at the pair of hearts, which featured a base made of one large braid, and another tiny braided section that went from the center of each heart to its bottom.

As for her followers' opinions on the style, many were in favor of the look, including Marsai Martin, who wrote, "Whoa that’s sooo cutee." Vanessa Hudgens confirmed she was "obsessed," while others were drawn to the style's complementing accessory: oversized zipper earrings.

Fans will have to wait and see how long the hearts (and accompanying pink-colored hair) stick around, but after previously trying out a three-toned dye job and a style that turned her hair into a bow, there's simply no telling what the hairstyle future of Cardi B might hold.