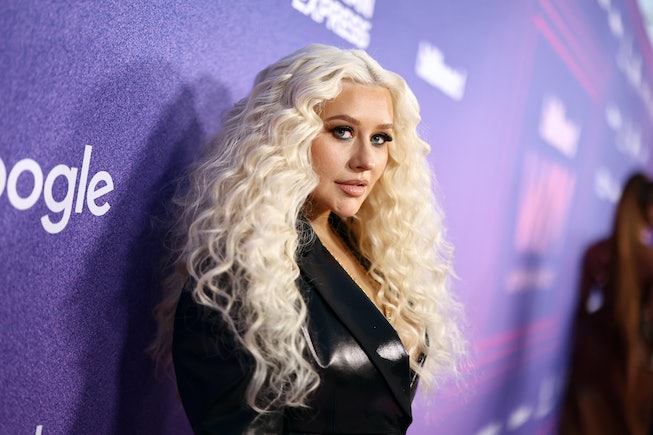 For the past year, chunky highlights and 2000s lowlights have been back with a vengeance, with the likes of Avril Lavigne getting colorful raccoon hair and Miley Cyrus getting black streaks in her platinum hair. Other high contrast two-tone hair trends have also circulated the beauty space for the past few years, making way for a full-on skunk stripe revival. Now, original Y2K icon Christina Aguilera has approved the revival, getting back her “Dirrty” era black lowlights in her signature bleached blonde hair.

Christina posted her new version of her new throwback hairstyle yesterday on Instagram with the caption “Ready for you @starlitefestival 💫.” Performing at The Starlite Festival, a month-long music and cultural event held in Cantera de Nagüeles, Marbella. The hair was done by celebrity hairstylist Iggy Rosales who also posted a pre-show preview of the hair, sharing that the iconic throwback look was created using Hidden Crown extensions. Now the black streaks are thinner and more subtle in the singer’s extra long strands. Christina’s cat-eye makeup was created by celebrity makeup artist Etienne Ortega. The overall effect is 2002 made modern for 2022.

Christina rocked chunky dark lowlights for her Dirrty music video, released in 2002. It then became her signature look for years after, making the beauty moment hall of fame and being created by thousands of people each year for Halloween, including Kylie Jenner in 2016. The star also tried out red lowlights during her Y2K boom and experimented with mixing different colored extensions. Most recently, Christina has been alternating between fiery red hair and her signature bleached blonde look.

While Christina’s latest hair venture goes into the familiar territory of high contrast lowlights, her new look is more subtle, with thinner pieces instead of her original chunky streaks. The look also features an updated hair style of a sleek half-up and half-down ponytail, showing a balance to nostalgia and current trends. Overall, Christina is showing us all how she’s still the reigning queen of the Y2K beauty aesthetic and has given her stamp of approval on the lowlight revival for the rest of us.