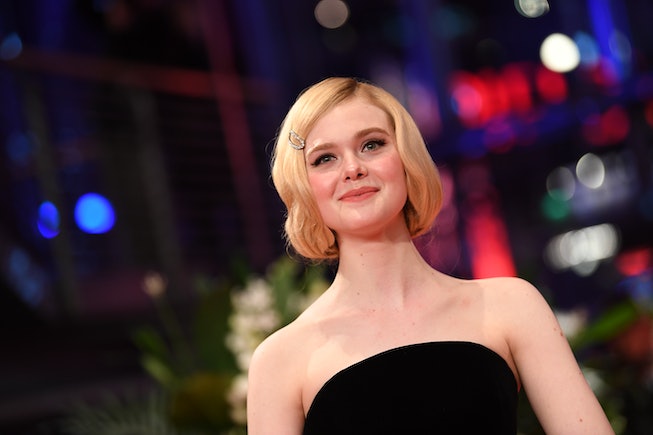 For her newest selfie, Elle Fanning shared a side not often seen by fans. Sharing that she's among the 31 million Americans with eczema, Fanning posted a photo that highlighted how the common skin condition impacts her eyes. The star of Hulu's The Great went filter-free for her September 14 photo, capturing multiple images of her face. In both photographs, she kept the focus on her eyes, captioning the images with "Eczema but make it eye shadow."

As the selfies show, Fanning's eyes feature skin reddening that's commonly associated with eczema. According to The National Eczema Association, the skin disorder can cause a rash-like appearance, and the severity of its appearance can vary from person to person.

Although the former NYLON cover star contends with eczema on her eyes, the disorder can appear anywhere on the skin. Eczema is not contagious, The National Eczema Association notes, and while Fanning deals with redness, those with darker skin tones can expect to see brown, purple, gray, or ashen patches of skin. Additionally, the skin condition can cause itchiness, inflammation, and swelling. Thankfully, there are countless methods of treating eczema, and in some cases, eczema will go away with age, The National Eczema Association reports.

Fanning's decision to photograph her eczema has resulted in an outpouring of appreciation from fans. "Thank you for posting this! I struggle with eczema and it hurts my self esteem. It’s so refreshing seeing public figures without the filters and makeup to show that we are all human," one follower wrote. "Thank you for not using like a dozen filters, its so nice seeing real normal skin texture on this app and it makes me feel good about myself," another person commented.

Over the past few months, Fanning has continued to share her beauty experiments and at-home quarantine routines with fans. She previously dyed her hair pastel pink, used lipstick as a bold eyeshadow, and used blue mascara on her eyebrows. And based on the continued support of followers, it's clear that many are more than happy to virtually join Fanning throughout her beauty journey.