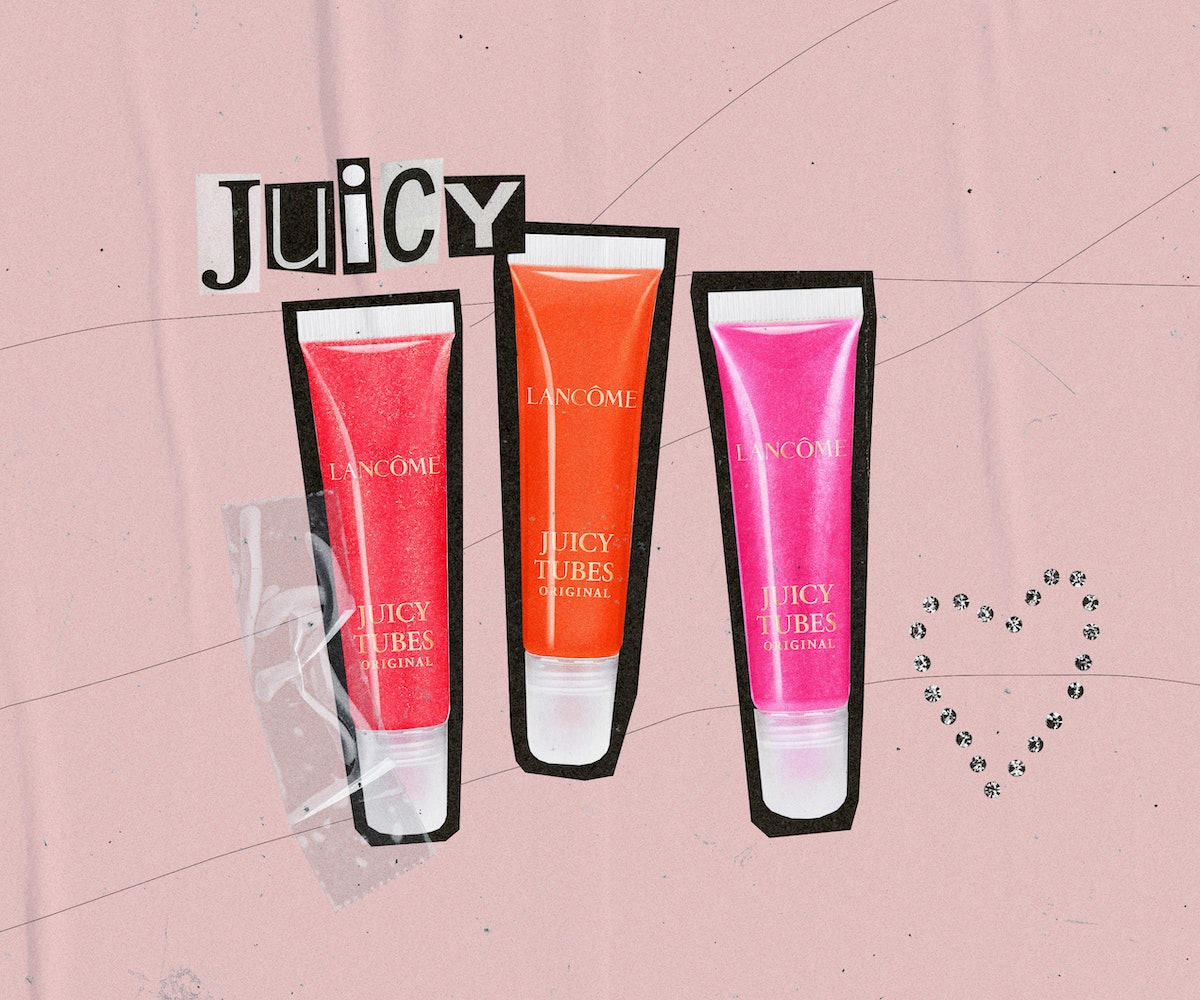 For those who grew up in the 2000s, just thinking about Lancôme Juicy Tubes can transport you back to the first time you saw Mean Girls in movie theaters. For photographer and makeup artist Robin Black, she’s 25 again, sauntering into the unisex bathroom at Tunnel, a former warehouse, now-defunct New York City club frequented by Cher, Boy George, RuPaul, and Marc Jacobs. She sees a woman in a black bodycon dress with a glossy, milky, unapologetically wet sheen on her lips and it captivates her. Black had never seen any lipstick like it before, and she had to know what it was. “In a distinctly Juilliard accent, she said it was a Lancôme Juicy Tube,” Black recalls. “The very next day, I ran to the fancy side of town to buy one.”

At 20-something dollars, Juicy Tubes were an indulgence for many. But every It Girl you could think of in the early aughts surely had at least five in her makeup bag at all times. The Regina George of my sixth-grade class at a painfully preppy private school in South Florida had a Dooney & Bourke wristlet filled with them. Between classes, she’d carefully line them up in a rainbow spectrum before slicking on her selection for the day. Each was sparklier, glassier, and delightfully stickier than the last. Not to mention their sweet scents that were as cloying as Dunkaroos and Gushers combined.

Ugh. And just like that, my envy is back.

Honestly, I never had a Juicy Tube to call my own at the time— of course, not for lack of trying. Luckily, due to their immense popularity, Juicy Tubes were one of the most duped beauty products of the Y2K era, so I had a handful of Victoria’s Secret knockoff glosses. Don’t ask me what they were called, though. I don’t remember. No name could possibly compare to the aptly titled Juicy Tube, anyway. Whether it was a pearlescent peach, jammy strawberry, or a Jell-O-like lime hue, the way the gloss mouthwateringly filled the no-frills clear squeeze tube simply could not be called anything else.

For me and fellow pre-teens, Lancôme Juicy Tubes were our not-a-girl, not-yet-a-woman gateway into the glimmering world of makeup. They were an age-appropriate midpoint between Lip Smackers and the red lipsticks sold at the makeup counters at the mall. For those moments with that glossy sheen on our lips, we could channel what it might feel like to be a Destiny’s Child member, Kimora Lee Simons, or “Jenny From the Block” era Jennifer Lopez. (Slightly sticky, but still glamorous.)

Even Black, who is about 15 years my senior and generally approached aughts fashion with more of a Courtney Love slip-dress-with-DocMartens aesthetic rather than a Paris Hilton blinged-out-Juicy Couture-tracksuit one, says Juicy Tubes were just as impossible to resist. There’s a Hello Kitty-like magnetism to them. “Super girly aesthetics generally turn me off, but my subconscious desire for anything kawaii makes me want to run through Sanrio stores hugging stuffed pink cats,” she says. “It's a mystery — but one that Lancôme figured out.” That they did. At the height of the Juicy Tubes craze, it was reported that 20 tubes were sold every minute in the U.S.

Fast forward to 2022, and the love for Lancôme’s Juicy Tubes from the coolest girls (and the cool aspiring) is still unmatched. They may have gone extinct for a brief time from 2018 to 2020, but the supremacy of matte liquid lipsticks didn’t stand a chance long-term. Lancôme brought back the iconic glosses in 2020 in honor of the product’s 20th anniversary with 20 shades in tow.

The relaunch was perfectly timed for today’s Y2K style revival. As Gen Z rediscovers all the beauty trends that Black and I loved growing up — butterfly clips, chunky highlights, blue eye shadow, and dark lip liner — they share them on TikTok, and Juicy Tubes are no exception. Now old enough to legally drink, 22-year-old Juicy Tubes are still holding their own next to modern iterations, like Dior’s Lip Glow Oil, Fenty Beauty’s Gloss Bomb, and Tower 28’s ShineOn Lip Jelly. But, let’s be real, nothing can bring you back to the days of watching the "Lady Marmalade" music video on TRL, flipping through a dELiA*s catalog, and staying up late to watch the latest episode of The O.C. the way Juicy Tubes can.

Juicy Tubes and their squeezable, wearable magic have bewitched generations and they show no sign of losing their power. They still sell out regularly at Ulta and Sephora. There’s always a new girl learning about Juicy Tubes for the first time on TikTok, while those of us who are old enough to remember 2000 are more than willing to spend $20 on a lip gloss in one of our many efforts to heal our inner child and recapture that elusive cool girl feeling we so deeply desired once upon a time. Lancôme knowingly plays right into this fascination. A glittery watermelon Juicy Tube shade you can shop right this very moment is called, fittingly, Magic Spell.