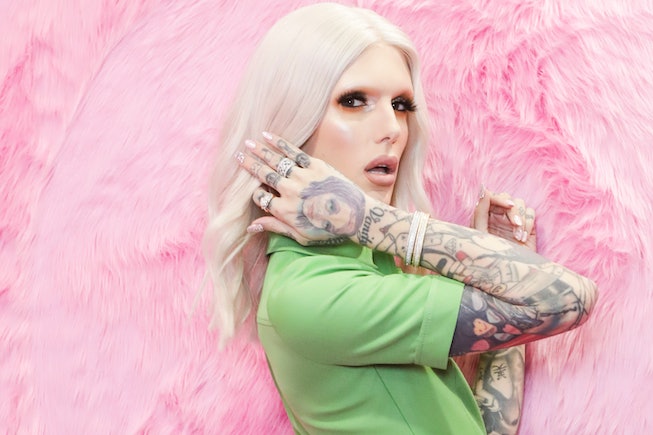 UPDATE 7/14/2020: On July 14, Ulta set all Jeffree Star x Morphe collaboration products on sale, with remaining products all set to 50 percent off. Its is unclear whether or not the reduction in price is in direct response to Morphe severing commercial ties with Jeffree Star Cosmetics.

On Friday, Morphe made its stance on Star known, tweeting, "Today we’ve made the decision to cease all commercial activity related to Jeffree Star and affiliated products. We expect this to conclude within the coming weeks. As we look to the future, we will continue to share updates on what lies ahead for the Morphe brand."

Jeffree Star Cosmetics then responded. On the evening of July 10, the brand expressed feelings of shock and sadness in an Instagram post. "Over the past 5 years we've accomplished amazing things together and released iconic products. We are proud of everything we've accomplished together," the statement reads.

As of Monday, July 13, the Jeffree Star Cosmetics brand remains a featured brand on the Morphe Brushes website, but the decision by Morphe follows the brand's previous removal of a collaborative collection between Shane Dawson and Star. Although Morphe had declined comment on the reasoning behind its online removal of the collection, its disappearance came after Dawson had addressed his past role in participating in racist behavior, and allegedly making sexualized jokes regarding children.

Previously announcing over the weekend of June 20 that he was leaving the beauty YouTube comment, Dawson was later pulled back into the drama when Westbrook created a video alleging that Star and Dawson had shared misinformation on Charles with her. Star and Dawson have not yet publicly responded to Westbrook's video, but Dawson did go live on Instagram, calling Westbrook "manipulative."

During Westbrook's video, she had alleged that Star was a co-owner of the brand — a relationship that Morphe declined was true, telling Insider, "We can confirm that Jeffree Star retains no ownership of Morphe."

Before Morphe had made the decision to end its commercial ties with Star, Jackie Aina announced she was ending her support and participation in the brand's affiliate program. On July 2, Aina tweeted, "I will no longer be a @MorpheBrushes affiliate. code “EDGES” has deactivated. I refuse to align myself with a company that continues to retail antiblack racist beauty brands. I strongly encourage other influencers to do the same!" Although the comment made no specific mention of Star, Aina had previously accused Star of "blatantly racist behavior" in a September 2018 tweet. And in recent weeks, beauty YouTuber Kameron Lester said Dawson and Star had treated him like the "token Black kid."