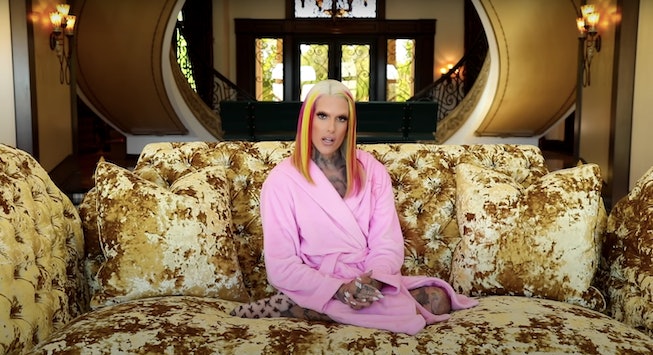 The whirlwind of recent drama in the beauty YouTube community continued on Friday, July 17, when Jeffree Star broke his silence on recent events surrounding Shane Dawson, Tati Westbrook, and James Charles. Nearly two weeks after Westbrook released a video, in which she accused Dawson and Star of feeding her manipulated information regarding Charles, Star gave a response. That said, not everyone following the saga is exactly pleased with what he had to say.

The video, titled "Doing What's Right," comes as Star faced continued scrutiny for his friendship with Dawson, along with ongoing allegations of his own racist behavior. Prior to releasing the clip, Morphe had already cut commercial ties with the YouTube star. The move came after Jackie Aina announced she was ending her participation in Morphe's affiliate program. "I refuse to align myself with a company that continues to retail antiblack racist beauty brands," she had written.

During the video, Star doesn't specifically refer to Westbrook, Insider reports. Rather, he repeatedly references the "situation." He denies that he had ill intentions, saying, "I didn't try to take anyone down. I'm not a villain in a movie. This isn't a Netflix series with a crazy storyline. I know it sounds like it, and trust me, I'm sure I'd watch it as well, but this is my real life. A lot of things that are happening and being said are false."

He fought back against Westbrook's claims that he would respond to her video by "exposing everyone," and said that he would not be using his response to "show a million text messages." Star said he's not entertaining the idea of exposing anyone, but did reference that he has lawyers involved in examining the situation.

Further along in the clip, Star offers an apology to Charles for the first time, saying that instead of calling Charles and verifying what he had heard, he chose to believe what was happening "behind the scenes." He goes on to say that he "fell for a lot of things and got caught up in the hype." He then says, he's fully removed himself from the situation.

In the clip, Star does attempt to deflect attention away from the drama in the YouTube community, pointing to "way bigger" issues. Of those bigger issues, he accuses the media of being silent about the murders of Black transgender women, and references the deaths of both Elijah McClain and Breonna Taylor.

Only moments after making these remarks, he then affirms his continued friendship with Dawson, a fellow YouTuber once involved in the creation of numerous racist videos. Both Dawson and Star were also just accused by beauty YouTuber Kameron Lester of tokenizing treatment. The video later closes with Star reflecting on the future of Jeffree Star Cosmetics, and he promises the impending release of an inclusive collection.

Since the video's release, many on social media have spoken out, and not everyone is thrilled with his response. Some called it the "bare minimum," while others questioned why Star chose to reference Taylor, given his past history, writing, "the way jeffree star was silent on blm for the past month and a half," and "blm is not a prop for you to use in order to clear your record. it’s an incredibly important movement and message and jeffree is twisting it to his benefit." YouTube comments on the video have also been disabled.

According to SocialBlade, Star lost upwards of 100,000 YouTube followers in the days following his video release. See more of the internet's response to Star's video, below.