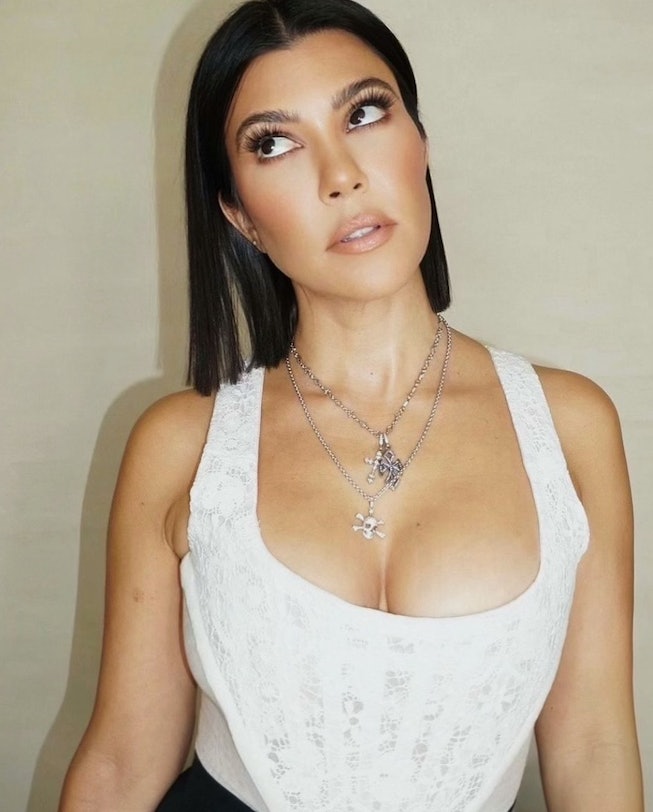 Kourtney Kardashian is having quite the year. Ever since the eldest Kardashian sister made it official with the punk-rock drummer Travis Barker in January 2021, she has seemed happier and more in love than ever before. Her new care-free, rebellious attitude has seeped into her new aesthetic, making her look every bit of the rockstar girlfriend ideal, with the cool-girl haircut to match.

Back in August Barker gave Kardashian quite a trim, cutting off pretty much all of her long dark brown hair and setting the transformation into motion. While the original blunt cut would later turn into a very chic neck-length lob, it seemed that that was as short as the social media star was going to go.

But, on October 7th, Kardashian took to the ’gram to show off her new, even-shorter bob haircut, this time sleek, straightened and center-parted. Her chin-length, blunt bob comes courtesy of hairstylist Peter Savic, who has been responsible for her most recent hair looks. In the image her makeup is by her frequent makeup artist Tonya Brewer.

Then, on October 12, after apparently decorating her dinning room with the most ghoul-filled Halloween decor money could buy, Kourt posed perfectly angled on her table showing off all the body and bounce her new ’do has to offer with a caption that reads, “Queen of Halloween.” Savic later reposted the image with the caption, “Just a little hair trim for my beautiful Kourtney”, confirming the even fresher cut. With a side part, and swooping curled under ends, this shorter haircut officially crosses the line from lob to bob.

While the new cut has been highly received by her fans, more importantly her rocker boyfriend, Barker approves. Under the saucy photo he commented “Baby” with a black heart emoji, because in a punk-rock relationship that’s what one does.

While a the look is nothing new for Kardashian, this is probably the shortest we’ve ever seen her hair. Typically, anytime the Kardashians wear their hair short it’s a wig, so for Kourtney to cut her own strands feels revolutionary. It’s more than just falling into the rockstar life, it’s a new beginning and and we love that for her.