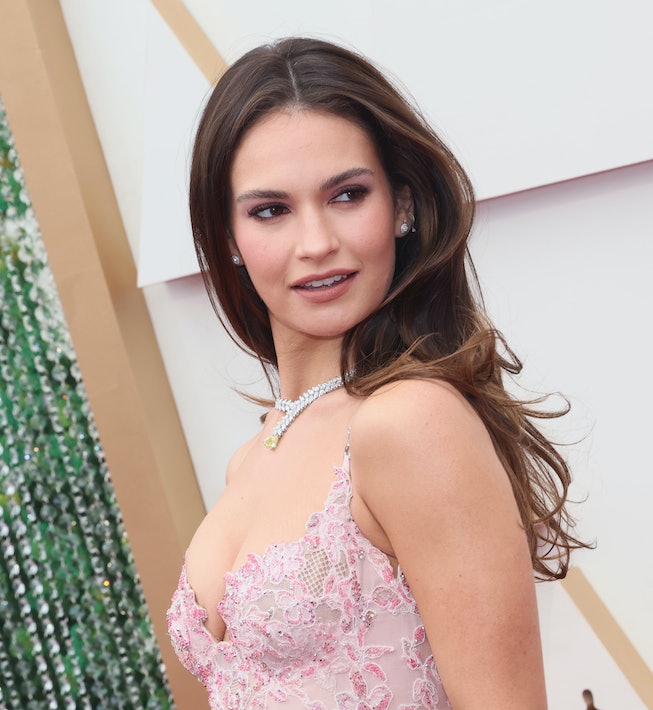 After transforming into Pamela Anderson for Hulu’s Pam & Tommy — including a bombshell blonde makeover and prosthetics— it seems Lily James isn’t done with the bleach just yet. While she returned to her rich brunette color after filming and has been sporting the look ever since, the actress has made the decision to go back to blonde IRL. Yesterday July 27, James posted her hair transformation on her Instagram story showing off her bright new ’do.

Tagging her hair stylist John MacPherson, Lily revealed her new buttery blonde look calling the salon transformation a “hair miracle.” MacPherson also posted the new look on his Instagram with the caption “Brunette to blonde for @lilyjamesofficial 🔥🔥🔥.” Fans have been blown away by the transformation, as going from brown hair to blonde in one sitting is often difficult and damaging for hair, unless it’s under expert colorist supervision. “I love her blonde my Lily,” commented Rita Ora. “I wish my hair would lift like that!😍😫,” wrote a fan.

Lily has had some dramatic hair transformations as of late. Aside from looking nearly unrecognizable in Pam & Tommy, she also recently had blunt black micro bangs as part of her goth makeover for her recent Versace campaign. In the campaign, the actress also sported bleached brows and nearly black lipstick showing her full range and versatility to transform between goth girl and blonde bombshell.

While it’s unclear if Lily’s near hair is for a new role or just because she loved playing Pamela Anderson so much, there’s no doubt that the light golden hues suit her. With darker roots, silky ends, and what appears to be little to no hair damage, we also need her hairstylist to share his bleached haircare secrets ASAP. In the meantime, we’ll all get to enjoy Lily’s Pam-inspired look for a while longer— or at least until her next hair transformation.