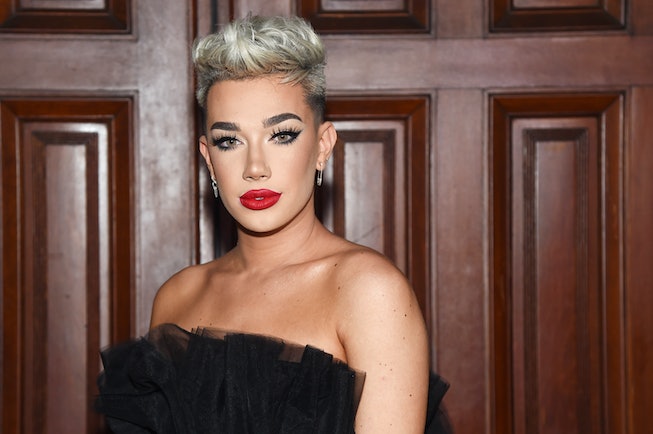 Updated: This story has been updated to reflect tweeted statements from James Charles and MannyMUA.

This year has brought an influx of new beauty brands, particularly among celebrities. The beauty space has always been a little crowded, which is welcome news for those that love to try new products, but James Charles and MannyMUA don't seem to be as thrilled by the crowd.

As pointed out by the Twitter gossip account, TeaSeshYT and the BeautyGuru Reddit, both Charles and MannyMUA shared their thoughts on new beauty brands in tweets made on August 5. In a now deleted tweet, Charles wrote, "people who do not wear makeup should not be coming out with makeup brands but that's just my opinion."

For his take on the beauty industry, MannyMUA weighed in on celebrity collections, tweeting, "Does anyone else get slightly irritated when celebs come out with entire makeup lines? especially when those celebs don’t even wear makeup... i’m like girl." As of Thursday, August 5, afternoon, MannyMUA had deleted his tweet.

Although both Charles and MannyMUA did not initially specifically name a person or brand in their comments, some speculated that they were referring to Alicia Keys, who announced the forthcoming launch of a new beauty brand via e.l.f. Beauty, due out in 2021, just hours before their tweets were shared. However, Keys did not specify whether her collection will even include makeup, and in a tweet made after the announcement, she appeared to hint at the release of a skincare collection.

Some theorized that MannyMUA was referring to Selena Gomez, but he denied that, writing that he loved her, and was excited to try her upcoming Rare Beauty collection. Reddit users also pointed out that Addison Rae could have been the subject of tweets, as she recently confirmed the launch of Item Beauty. Charles also denied that his tweets were about Charli and Dixie D'Amelio, who have collaborated with Charles in the past and were recently named as the faces of Morphe 2.

On the afternoon of Thursday, August 5, Charles addressed his tweets, posting a statement directed at Alicia Keys. As per the tweeted explanation, Charles said that he was “bothered” by the star’s decision to possibly create makeup after she had previously announced she was no longer wearing makeup.

Ending the statement, he offered an apology to Keys, saying, “It wasn’t my place to gate keep this industry. I can't wait to support and try out the products and I know the brand will be worth a billion in a few years.”

MannyMUA also clarified his tweets, sharing a statement on Thursday, August 6. He confirmed that he was also speaking about Keys, saying, "I know that she stopped wearing makeup years ago, but I should have researched more to discover that she is working with elf cosmetics to develop skincare."

Offering an apology to Keys, he wrote, "There is room and space for everyone in this community."

NEXT UP
Beauty
Harry Styles’ Beauty Brand Is Dropping Their First Makeup Collection This Week
Beauty
September 2022’s Best Beauty Launches Will Keep You Cozy And Cute Throughout The Fall
Beauty
Olivia Cooke’s Beauty Evolution, From Indie Ingenue to ‘House Of The Dragon’ Queen
Beauty
Halloween Cat Makeup Ideas, From Easy to Inspired