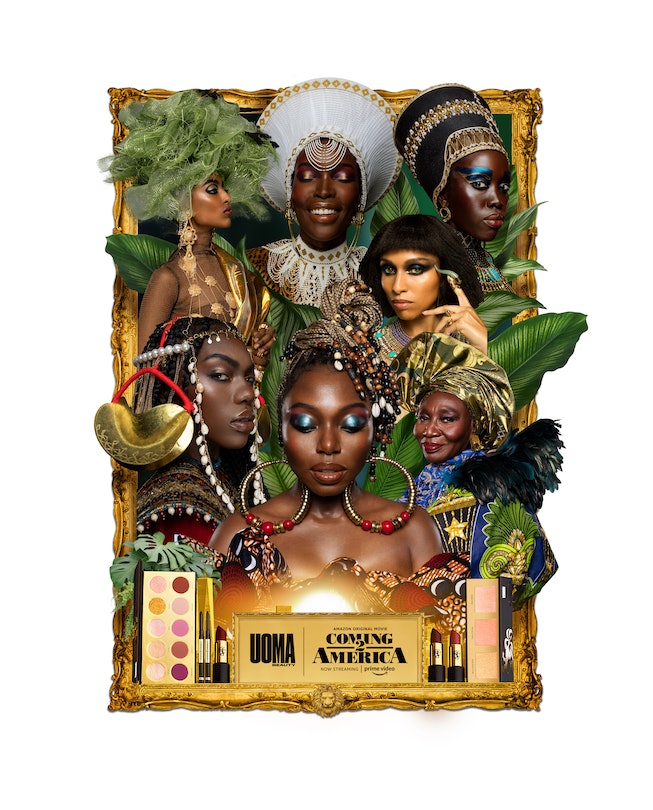 The debut of Coming to America brought renewed attention to how accurately portray the lives of African, African-American, and Black people in films. It quickly became, and remains, a cultural phenomenon. Now, 33 years later, the movie's sequel, Coming 2 America, has finally arrived, and UOMA Beauty collaborated with the film on an exclusive collection that brings a sense of that African royalty off the screen and into your hands.

Released on March 4th, the UOMA Beauty Black Magic Coming 2 America collection is inspired by Zamunda, the fictional country featured in the movies. The collaboration is all about showcasing African beauty in its most authentic form, and the entire collection was created with real African queens and royalty in mind.

The collection is comprised of nine pieces, including three eyeshadow palettes, three lipsticks, two lip liners, and a highlighter palette. With a major focus on the eyes, the collection offers opulent, regal hues, including a royal blue, multiple golds, and some playful, peachy pinks, as well as neons.

The Royal Heir-itage Color Palette is the largest of the collection, and contains ten different shades — representing 10 royal queens from ancient Africa — in both shimmer and matte formulas. Featured in the palette are shades of purple and pink, which will look especially royal on any skin tone.

Thanks to the help of Sir John, Zerina Akers, and Trevor Sturmann, as well as some of the film's original costumes, designed by Ruth E. Carter, the campaign imagery is just as grand and opulent as the collection. Paying tribute to nine great African queens — Amina, Yaa Asantewaa, Kandake Amanirenas, Nefertiti, Makeda, Nzinga Mbande, Nandi, Moremi, and Ranavalona — the campaign imagery features odes to "Black Skinned Beauty," with portraits that show Courage, Pride, Heritage, Opulence, and Resilience.

The UOMA Beauty Black Magic Coming 2 America collection is priced from $18 to $44 and is now available online at UOMA Beauty. It will also be available to purchase at Ulta.com, Nordstrom.com, Walmart.com, and Beautylish.com, starting Friday, March 5, when Coming 2 America premieres globally on Amazon Prime Video.

For now, check out more of the Black Magic collection, as well the campaign below.