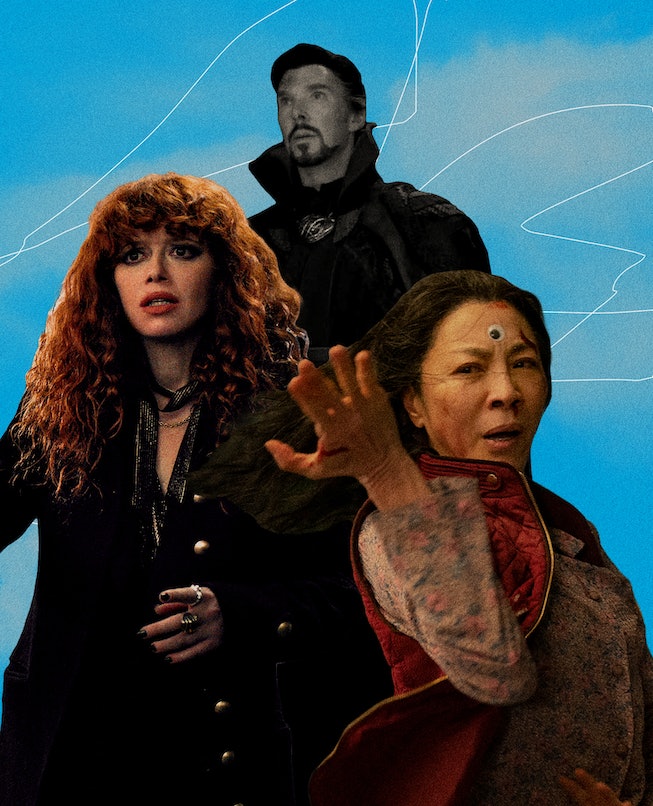 Courtesy of Netflix, A24, Marvel Studios

In the first season of Russian Doll, our protagonist, the snarky chain-smoking video game programmer Nadia Vulvokov, finds herself trapped in a vicious time-loop, forcing her to relive the night of her 36th birthday party over and over again. A mind-bending comedy that makes ample use of star Natasha Lyonne’s wide-ranging talents, the Netflix series was deceptively immersive. What started in rather familiar territory — a Groundhog Day update, reinvented for the millennial set — eventually morphed into something far more profound, using Nadia’s endless spiral of death as a lens through which the show could explore loftier concepts like inherited trauma, mental illness, and collective responsibility. The addition of Alan Zaveri (Chicago Fire’s Charlie Barnett), a similarly emotionally-stunted 30-something who finds that he and Nadia are stuck in the same time-loop, only enhanced the show’s mission. With Alan’s individual neuroses standing in stark contrast to Nadia’s, the pair became an ideal odd couple. They were inverted reflections of one another, eventually learning how their yin-yang relationship might just be the key to unlocking the secrets of their rather unfortunate predicament.

Russian Doll was emotionally complex, but it also was also a heady mind-trip that refused to explore its overarching themes in any traditional manner. If Nadia needed to confront the guilt she still harbored for the unfortunate suicide of her mentally ill mother, she wouldn’t do so through a visually-rote therapy session, like so many other shows. Instead, she’d do so only after chasing a younger version of herself through the bustling streets of her New York hometown.

In Russian Doll, growth is a metaphysical concern, and nowhere does this series show that more than in its presentation of a multiverse. The concept was first posed at the tail-end of season one, when Nadia and Alan finally figured out how to break their time-loop, only to each find themselves dealing with a “different” version of their partner in the present. But this is nothing compared to the show’s second season, which ups the ante. Once again, Nadia and Alan are confronted with blips in the space-time continuum, but now, they aren’t exploring their presents and immediate pasts within the confines of New York. In the show’s second outing, our central characters are also forced to deal with the pasts of their ancestors, taking them to exotic new locations and time periods, like Budapest in the 1940s and Berlin in the 1960s.

Watching these new episodes, I couldn’t help but see the parallels in these journeys and in the ones I take while stoned. Russian Doll imagines that New York City subway cars can actually be time-portals in disguise, transporting unsuspecting riders between decades, countries, and even physical forms. In truth, is that really any different than how I felt when I boarded the MTA after popping a rather strong edible, only to miss my stop and end up somewhere in deep Queens?

Season two of Russian Doll is trippy and hallucinatory. The show continues to abide by certain rules, but it’s just as quick to pose new questions right when you’re expecting an answer to an old one. It zigs when it’s supposed to zag. In its exploration of the unknown, it’s equal parts thrilling and anxiety-inducing. It’s little surprise, then, that Netflix has decided to debut these latest episodes today — on 4/20, of all days. After three entire years, the streaming service has decided that a “holiday” dedicated to the recreational ingestion of that oh-so-holy plant the marijuana flower was the best time to send eager viewers into a mind-melting tailspin.

And to that effect. I couldn’t agree more.

In fact, this 4/20, I’ve decided to give myself over to the multiverse completely. I don’t know when I decided to do this. Hell, I don’t even know if I decided at all. Culture, in many ways, has done the deciding for me. Everywhere I look, talks of parallel worlds and alternate timelines are popping up. Of course, the idea that our immediate reality is not our only reality isn’t new in and of itself. But if the multiverse were to ever experience its own “15 minutes of fame,” the current omnipresence of this concept in recent media would suggest that the clock is ticking right now.

Take Everything Everywhere All At Once, the new sci-fi film starring Michelle Yeoh as Evelyn, a beleaguered laundromat owner undergoing a tax audit while also struggling in her relationships with both her husband and her daughter. Directed by The Daniels (Swiss Army Man’s Daniel Kwan and Daniel Scheinert), the film primarily revolves around Evelyn’s attempts to save the world after finding out that she may be the last hope against an all-powerful being threatening to destroy — yes, you guessed it, the multiverse. Delightfully silly with an emotionally poignant punch, the film has quickly become a huge success story for its distributor A24. Since opening on limited screens nationwide earlier this month, the film has already fought its way into the top 20 of the year’s highest-grossing films — which is saying a lot, considering how many other films on that list feature superheroes, are sequels, and/or are based on already popular IP.

But what The Daniels achieve in their proudly maximalist adventure works because of how they envision the multiverse. Not just a place in which Evelyn could live life as a highly-paid action star or as a talented hibachi chef, the multiverse is rather a place where floppy dildos can be used as nunchucks and giant everything bagels can open portals of eternal darkness. Understanding the scientific minutiae of film’s multiverse logic is already a feat when sober, but I’m sorry — watching an evil Jenny Slate sling a small dog around like a deadly weapon is exactly the kind of ridiculous image one would kill to see when the edible hits.

The multiverse trend in media is seemingly unstoppable, but the more I resign myself to its inevitable ubiquity, the more I’ve found to value about its contributions to sacred arts of TV-watching and film-viewing — namely, that when combined with mind-altering substances, very few things are more rewarding. Luckily, there’s plenty I have to look forward to.

In a few short weeks, Disney will debut the next big-screen entry into its sprawling Marvel Cinematic Universe with the highly-anticipated sequel to Doctor Strange. While the original 2016 film, which introduced Benedict Cumberbatch’s magic-wielding superhero into the wider fold, is far from my favorite MCU origin story, the upcoming Doctor Strange in the Multiverse of Madness is already shaping up to be one of the franchise’s more inventive outings. The film is excitedly being billed as the MCU’s first horror film — and with The Evil Dead maestro Sam Raimi returning to the world of crime-fighting superheroes (following his great Tobey Maguire-as-Spider-Man trilogy) for the occasion, it’s easy to trust that adequate scares are definitely on the horizon. Recent trailers have teased all sorts of enjoyable treats — giant one-eyed cyclops throwing buses through city streets, foreboding talks of recurring dreams, Elizabeth Olsen acting opposite a different version of herself — but nothing feels more exciting than the limitless possibilities posed by the opening of the portal to the multiverse itself. In Doctor Strange, the multiverse is a dangerous place — complete and utter chaos will ensue.

And something similar may be on the horizon even later this year, when Sony Pictures Animation releases the sequel to its game-changing 2019 Oscar winner Spider-Man: Into the Spider-Verse. The first film was immediately hailed as a game-changer based on its central character alone: 14-year-old Miles Morales was the first Afro-Latino to don the Spidey Suit. But what elevated the film to the kind of cultural juggernaut that could unseat a beloved Pixar sequel (Incredibles 2), a Wes Anderson flick (Isle of Dogs), and a box office-breaking Disney release (Ralph Breaks the Internet) at the Academy Awards was its innovative implementation of the multiverse. As with Russian Doll and Everything Everywhere, Spider-Verse used the multiverse as a healing concept, telling a compelling story that championed diversity while also promoting ideas of a shared identity. Trailers for Spider-Man: Across the Spider-Verse (Part One) tease similar narrative threads in the future, now using the multiverse to explore ideas like love and free-will. And yes, we should also be getting some more Spider-Ham (aka Peter Porker).

So, as the marijuana-inclined of us clock out of work and prepare to get lifted to a place no airplane could ever take us, I must suggest that we collectively use this most sacred of days as an ideal opportunity to take a deep-dive into the multiverse. As a drug, weed is beloved for its eye-opening, world-expanding capabilities. As a hypothetical concept, the multiverse is much the same. The multiverse can be anything: it’s dangerous for Doctor Strange and liberatory for Miles Morales. It’s emotionally healing for Nadia Vulvokov and world-saving for Evelyn. It offers infinite possibilities about our reality, enhancing our understanding of the world around us — not by reducing its scope and convincing us that what we see is what is there, but by significantly widening it and presenting the slightly more difficult idea that, perhaps, we’ll never fully know.

But isn’t there something quietly comforting about that prospect? In a world in which what is already known seems so bleak, isn’t there power in believing in alternate possibilities? That this, alone, is not all there is? “The multiverse is a concept about which we know frighteningly little,” says someone in the trailer for the upcoming Doctor Strange tentpole. Well, what better time to let yourself fall down that hole than on 4/20? Spark up and let go. Give yourself over. You won’t regret it.