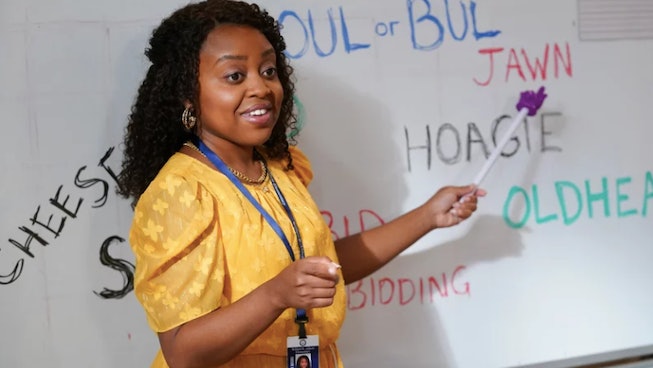 UPDATE (09/13): A week before it returns to our television screens, ABC has shared the trailer for Abbott Elementary’s highly anticipated second season. Proudly announcing that “The Emmy Award Winning Series Is Back” — Abbott won an Emmy for Outstanding Casting over the weekend before winning two more (for Brunson’s writing and for Sheryl Lee Ralph’s supporting performance) at last night’s ceremony — the new teaser opens with everyone’s favorite incompetent principal Ava Coleman (Janelle James) saying, “Welcome back, dorks!” So, yeah, some things never change.

And who would ever want them to? The first trailer for the upcoming 22-episode season, which kicks off next Wednesday, gives us time to check in with all our favorite faculty members from the titular Philadelphia public school, including newly-minted Emmy winner Quinta Brunson as Janine, who is just as cluelessly hopeful as ever; Emmy nominee Tyler James Williams as Gregory, who is now consulting school janitor Mr. Johnson (William Stanford Davis) for advice about how best to deal with his new first graders; Lisa Ann Walter as Melissa, who might be losing her mind after being assigned ten new students out of the blue; and of course, new Emmy winner Sheryl Lee Ralph as Barbara, who still seems to always have the right advice for everyone.

Sure, Abbott Elementary is still in reliably dire straits — there aren’t enough teachers for the enrolled students, Ms. Coleman is still threatening students, something scary was let loose in the cafeteria, and Janine eats like she “took a cooking class in prison” — but at least we have our favorite characters to guide us through the much. “This is exactly what I want for myself this year,” Janine says at one point. “I’m 100% and I’m happy they’re noticing. It’s very zen actually.”

Check out the trailer before Abbott Elementary’s season two premiere on September 21.

For years, people have discussed the death of the network sitcom, which has recently been overshadowed (in terms of viewership, critical response, and awards potential) by the edgier comedic fare found on cable channels and streaming services. The days where the Modern Family’s of the world dominated the cultural conversation seemed long gone — that is, until the arrival of Abbott Elementary. Created by, written by, and starring A Black Lady Sketch Show veteran Quinta Brunson, the freshman ABC sitcom quickly gained an audience, notably quadrupling its ratings over several episodes and inspiring countless social media memes in the process.

A side-splitting mockumentary about the inner-workings of a Philadelphia public elementary school, the series has wasted no time becoming the name on everybody’s lips. It was no surprise then when ABC handed out an early second season order for the celebrated sitcom, and now a new teaser has confirmed the return date of the quickly beloved show.

"These new keys I made must be too thick. I blame the locks, honestly,” she says. Characterstically sincere, Janine then adds, "Well, what if we take this time to have a heartfelt discussion about what we're excited about in the new year,” before being dismissed by the rest of the cast.

Back in March when the show was renewed, ABC made the renewal announcement in a similarly refreshing manner. In lieu of a press release, the network issued a letter “from the desk” of the show’s true breakout character, the hilariously narcissistic Material Gworl herself: Principal Ava Coleman (played with Emmy-worthy chutzpah by comedian Janelle James).

Addressed to “Faculty and Students (aka My Fans),” the bafflingly (but hysterically) inept school administrator began, “The camera crew I hired to showcase all that I’ve made happen at our beautiful school thinks I’m a star. I mean, are we surprised? No, we’re not :)”

Then, the good news. “With that said, it is with great pleasure that I share they’ll be returning for the 2022-2023 school year! That’s right — Abbott Elementary Season Two is coming to a screen near you.”

Furthermore, in keeping in line with the show’s real-world efforts to effect positive change for America’s crumbling public education system — which recently involved partnering with Scholastic to provide free book fairs to underfunded schools — the letter humorously directed readers towards DonorsChoose, a charity focused on helping classrooms in need. (The show centered episode three, “Wishlist,” on similar organizations.) “Despite my being a natural in front of the camera, these things don’t come for free, and my staff is having trouble seeing all of my unleashed potential. Something about needing supplies? Anywho, I could use your help getting them (Janine) off my back,” she wrote, before linking to the organization.

Of course, this is the one and only Ava Coleman we’re talking about here, and the notoriously self-minded principal did not waste this opportunity to try to procure something for herself too. “I also welcome spa credits and gift cards over $100 on the heels of this thrilling announcement,” she said. “I also have all major money transfer apps if you wanna go that route.”

“Love, Light and all of that stuff,” she signed off.