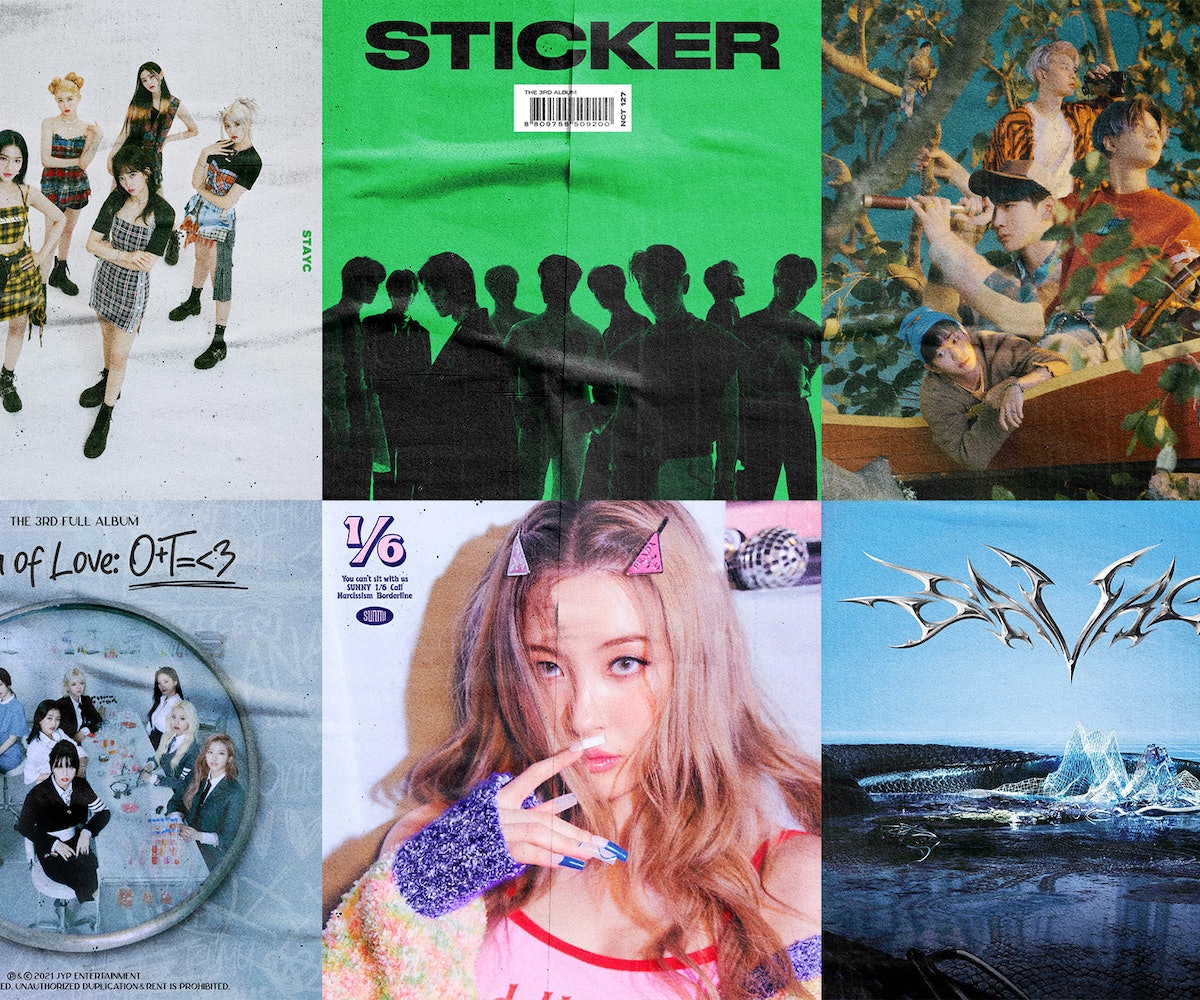 ‘Tis the most wonderful time of the year. 2021 is blissfully coming to an end, the holidays are right around the corner, young people are swarming Kellogg’s job portals and showing capitalism a big middle finger, and we’re finally going through the best K-pop releases of this year.

In 2020, as the world receded behind closed doors and face masks, K-pop turned to times well past and genres well-established, often bringing the party to us with albums steeped in the sounds of the ‘80s, and lyrics of hope. No other genre adapted to the “new normal” as K-pop did, switching seamlessly to online mediums and virtual performances as if they’d been doing it day in and day out.

In 2021, K-pop took that trajectory upwards and onwards. In spite of album releases and music videos being confined to the studio, acts went to infinity and beyond, sometimes literally, considering the number of futuristic, space-themed releases we saw this year. Moving deeper into this new semblance of a normal clearly didn’t mean the genre would stop dreaming of bigger, better, and brighter things. It kindled an odd kind of hope — when we had all gotten used to letting go of everything familiar, K-pop’s dogged insistence on keeping the show going felt delightful. Below, without further ado, are the 10 best K-pop albums of the year, in no particular order.

SHINee’s Key has always been one of K-pop’s most honest and outspoken figures, and his second solo album Bad Love is a proud, unabashed declaration of just how much he has to say. Bad Love is a Key album through and through: flamboyant, fashionable, fierce, and surprising in just how intensely and reverently Key poured himself into every aspect of its making. From the ‘70s-inspired sci-fi visuals to the David Bowie-era fashion, to the retro sonic arrangements, to the surprising streaks of vulnerability on tracks such as “Eighteen (End Of My World)” – Bad Love is where Key roars and shines, as if announcing that he may be a veteran, but he’s only just beginning.

If there’s anything we know about NCT 127, it’s that we don’t know what they’re going to do next. The five years of their career so far have been built on the backs of far-out concepts which may spark a streak of doubt at first, only to be dissipated in the wake of a coherent album. Sticker was no different. Be it the frenetic pace of “Breakfast” or the choppy R&B progression of “Focus,” or even the softness of “Magic Carpet Ride” — on Sticker, NCT 127 showed us that confidence only comes with an act entirely sure of their identity as the rule-breakers.

It’s only been a year since aespa waltzed into our lives with the dangerously addictive “Black Mamba,” and the eight-member girl group, half of whom are AI avatars, has been on an upwards trajectory ever since. In fact, it wouldn’t be too presumptuous to say that their debut mini album, Savage, has cemented their position as a force to be reckoned with in the world of K-pop.

From top to bottom, Savage comes bejeweled with powerful, anthemic tracks that not only do justice to aespa’s genre-bending music, but also balance their complex mythology expertly. On opener “ænergy,” for example, they send out a warcry against their sworn enemy Black Mamba, and on the bouncy “YEPPI YEPPI,” it's hard not to be charmed by the youthfulness of the members who are supposedly carrying a fictional universe on their back. By its end you’ll also be a believer of their now-famous axiom: Oh my gosh, don’t you know they’re… savage?

Let it be known that every time anyone played “Drunk-Dazed” this year, I ascended to a higher plane of existence. The song’s title should be enough of a clue, but ENHYPEN truly left us drunk and dazed with the rest of Border: Carnival as well. While its two leading tracks – the atmospheric “Drunk-Dazed” and the sultry “Fever” – set the tone, it’s in the rest of Border: Carnival that ENHYPEN truly emerges as a confident act capable of playing several roles, from the honest introspection on “Not For Sale” to the frustration on “Mixed Up.”

SHINee saved 2021 the moment Key took a look at Minho in his military uniform and called him embarrassing to his face, despite the fact they hadn’t seen each other after almost two years. The band’s first release since three members completed their military service, Atlantis was a very, very welcome gift.

Preceeded by the powerful Don’t Call Me, its repackage, Atlantis, was, in simple words, like coming home. Flitting from one genre to another — from the simple pop of “Heart Attack” to the reggae-inspired “Body Rhythm” — SHINee proved that two years apart could never shake their foundations. Coming back to them was as easy as breathing — but please, for the love of God, can we throw away the headdresses on “Don’t Call Me”?

TWICE have been on an upward journey of reinvention and introspection for some time now. In 2021, the culmination of that welcome transformation, was accompanied by their much-awaited world domination, now well and truly underway. Kicked off by their first English-language single “The Feels,” TWICE’s Formula of Love: O+T=<3 saw the group emerge from their cocoons of their earlier releases as confident, self-assured women. From the femme-fatale extravaganza of “Cruel” to the sultry sensuality of “Last Waltz,” Formula of Love: O+T=<3 was not just an ode to their growth as artists, but also a class album by a class act that has full faith in the path they are on.

It's safe to say that no other soloist in K-pop has conquered an aesthetic and sound as quickly as Sunmi. Since her 2017 hit “Gashina,” Sunmi seems to have trademarked the retro-queen, “hell hath no fury as a woman scorned” image. While ⅙ did take us back to that woman, it also displayed a newfound, distinct vulnerability. Maybe it’s the fact that she’s now found her sound and truly bloomed into who she is, but Sunmi felt lighter and more honest than ever on ⅙, whether she was serving up shimmery summer anthems like “Sunny” or laying herself bare on the heartbreakingly personal “Borderline.”

If 2020 was the year of disco revivals, 2021 was the year of pop-punk. Leading that movement in K-pop was quintet TOMORROWXTOMORROW, who surprised us all by breaking away from their previous styles and going ham on the genre on not just the album's title track “0X1=LOVESONG (I Know I Love You),” but also B-sides like “Dear Sputnik” and “Frost” — and what a glorious sound it was on them. Sure, others have sung about the crests and troughs of youth, but, on The Chaos Chapter: Freeze, TXT understands it intrinsically. It makes the album an expansive and genius body of work; on its eight tracks, TXT soar, bouncing from ballads like “Anti-Romantic” to more breezy pop like “No Rules,” proving that just like youth, their music is free and boundless.

While the rookies of 2021 kept us all on our toes, all eyes were trained especially on STAYC, who found themselves in the unique yet unenviable position of having to live up to the hype of their debut tracks, “So Bad” and “ASAP,” in the lead-up to Stereotype, their first mini-album.

Reader, they did not disappoint. With just four songs, STAYC’s Stereotype positioned the group as a formidable force capable of holding their own, while still expanding their horizons. While they could have gotten away with repurposing the formula that had evidently worked for them before, STAYC chose to not only litter their tracks with sonic surprises — such as the flute on the title “Stereotype” and the Latin pop-adjacent “Slow Down” — but also flip the script completely with slow, emotionally vulnerable numbers like “I'll Be There.” Dare we say STAYC is poised to become one of the best in K-pop's fourth generation.

AKMU's revolution has always been calm. The sibling singer-songwriter duo is the kind of act you sit with and breathe in deeply, let seep into your lungs so you can pour the tar out. Their songs have been described as gut-wrenching and poignant, and those descriptors continue to stand true for their second EP, Next Episode.

Keeping the disco flame of 2020 alive, Next Episode sees AKMU take the proverbial next step into adulthood, and deal with the emotional weight of it all. Along with some top collaborators — including fellow singer-songwriter IU and R&B vocalist Zion.T — AKMU twisted our hearts and made us cry all at the same time. Isn't that what life is all about? It may not be a walk in the park, but, with AKMU, it's alright.

See NYLON’s Editor Picks for our favorite albums and songs of 2021.