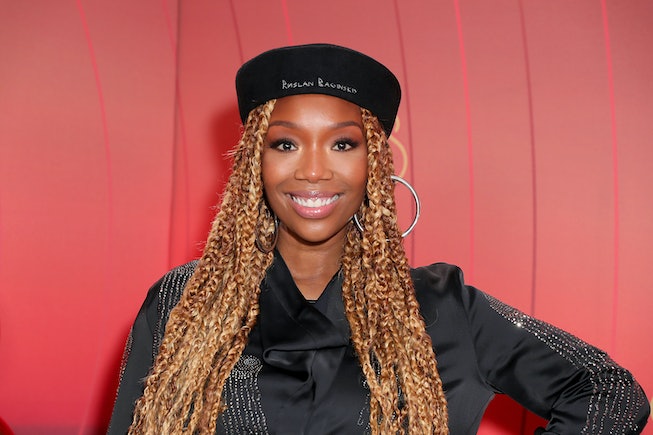 Brandy’s been back in the headlines for her acting. Most recently, it was because Disney+ finally added her beloved edition of Cinderella to its streaming library. And last year, she got the internet buzzing when Netflix added every season of her breakout sitcom Moesha to its own library. It’s clear that the R&B singer is having an acting renaissance — which isn’t to say she’s not still dominating the music scene, since last year’s B7 was stunning — so it was only a matter of time before she got a huge new break. Well, the moment has finally arrived: Brandy is set to star in a new ABC drama pilot called Queens.

According to The Hollywood Reporter, Queens will follow “four women in their 40s who reunite for a chance to recapture their fame and regain the swagger they had as the Nasty Bitches — a '90s group that made them legends in the hip-hop world.” The series is written and executive produced by Zahir McGhee while Tim Story is on board to direct and executive produce the pilot.

Brandy will star as Naomi, one member of the quartet, “who 20 years ago was better known as Xplicit Lyrics, the engine of the Nasty Bitches.” Described as “an artist with boundless talent,” Naomi was the member who thought she was destined for success following the group’s breakup. (She wasn’t.) “When the group gets back together, Naomi is reunited with the only man she ever loved, as well as the rival bandmate who stole that man from her. But what Naomi wants more than anything is to build a relationship with the daughter she was never really there for.”

The one and only Eve will star alongside Brandy as Brianna, another member of the Nasty Bitches, whose rap name was Professor Sex. According to Entertainment Weekly, Brianna was known for “rapping about money, sex, and her all-around glamorous lifestyle” 20 years ago, but now, she is “a proud wife and mother of five — in a stained sweatsuit who barely has a second to breathe.” Her arc will force her to “grapple with whether or not she still has the swagger and confidence that made her an icon decades ago.”

Other cast members include Power’s Naturi Naughton, as Jill, the third member of the quartet, who used to go by Da Thrill, and Ash vs Evil Dead’s Pepi Sonuga, as rising hip-hop star Lil Muffin (real name Lauren Rice).

If that wasn’t all exciting enough, there is also the fact that both Brandy and Eve will be contributing original new music for the show, making Queens the two-for-one of our dreams. Sure, it may not be the rumored Moesha reboot we’ve been desperately wanting, but it’s certainly a start!