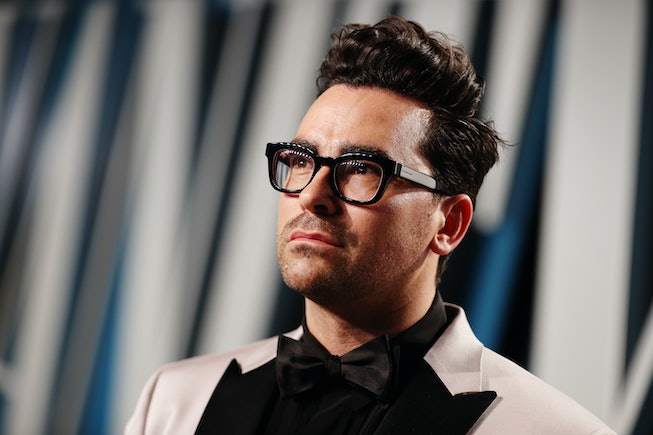 After a history-making sweep at last month's Emmy Awards, an official Netflix arrival for the final season of his hit sitcom, and some possible work on a possible movie, Schitt's Creek co-creator Dan Levy should be having the time of his life right now — just looking at the new trophies that now sit on his shelf and soaking up all the loving accolades that have been showered on him over these last few weeks. Instead, he's being forced to call out television networks online for censoring instances of same-sex intimacy in their promotion of his show.

Last month, just a day after Levy's historic showing at the Emmys, it was reported that reruns of all six Schitt's Creek seasons would begin airing, in weekly five-episode chunks, on Comedy Central (a sister network under Pop TV's parent company, ViacomCBS) starting October 2nd. According to tweets, Levy has been very happy with the recent Comedy Central partnership, citing the network as "lovely and respectful." But after discovering a video tweeted last year from the Comedy Central India account, it's clear that Levy doesn't feel quite the same about some of the international versions of the network.

The video is taken from "Housewarming," the fifth episode of Schitt's Creek's fifth season, which revolves around David (Levy) and Patrick's (Noah Reid) housewarming party. During the celebrations, the attendees play a game of Spin the Bottle, and Comedy Central India's clip shows several of the resulting kisses — including one between a man and a woman (Ted and Alexis) and one between two women (Alexis and Stevie). But when it's time for the lips of two men (Ted and David) to touch, the clip skips over the kiss entirely, jumping over to its immediate aftermath instead.

For anyone who has seen Schitt's Creek (or read any interviews with Dan Levy), the statement should not come as a surprise. Part of Levy's chief goal with the Pop TV sleeper-hit was to conceive of a world that was completely free of prejudice, including homophobia. David was deliberately crafted as a proud pansexual and his relationship with Patrick was the beating heart of the show's latter half (the series finale is all about their wedding, after all). To think that other television networks are selectively removing instances of (male) same-sex intimacy would naturally be of concern. What is Schitt's Creek without its idealistic view of queer love?

Check out Dan Levy's tweets below.