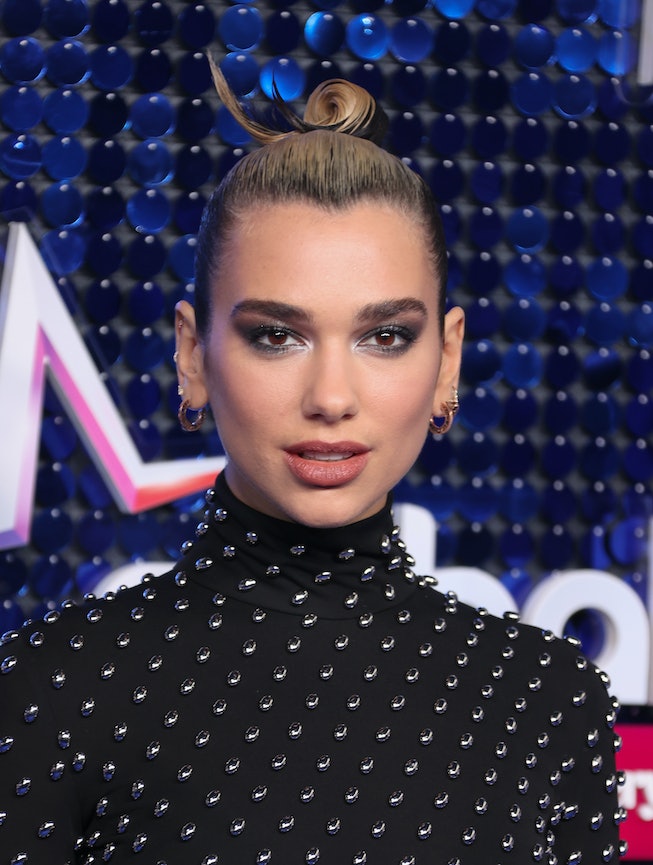 In between celebrating the success of her smash-hit sophomore album Future Nostalgia, recording jvideos for her latest singles, and tapping Madonna, Missy Elliott, and Gwen Stefani to feature on her upcoming remix album, Dua Lipa somehow still managed to find time to step in for Jimmy Kimmel as guest host for his popular talk show Jimmy Kimmel Live! As part of her duties, the "Physical" singer was tasked with giving a monologue and interviewing her new collaborator Gwen Stefani. But the highlight of her first late-night jaunt was definitely when she had to interview old people — mostly because, as it turns out, none of them knew who she was.

Right after her opening monologue — where she made jokes about her TikTok fame and referred to Jimmy Kimmel Live! as a "very weird episode of MTV Cribs" — Dua Lipa set the stage for a special segment called Who-a Lipa?

"Speaking of my music, a lot of my fans are young, but I'm always trying to reach a wider audience," she began. "So I decided to reach out to some seniors. These are real people who I interviewed over the internet. I told them I was conducting a survey about music but didn't tell them who I was."

While her guests complained about not being able to hear, Lipa, dressed in a pink and purple top, proceeded to ask the older strangers, "Do you know who Dua Lipa is?" Perhaps unsurprisingly, most of them did not. "Who?" one gray-bearded man responded, while another man, wearing a shirt featuring a spray-painted bass, inquired, "Is that a person?" An elderly couple struggled to pronounce her name and the one man that had heard of Dua Lipa clearly wasn't aware that he was talking directly to her. "I've actually heard that name somewhere," he said. "I assume it's a lady."

Later, she played her single "Break My Heart" for her guests and asked if they liked it. A woman in a monochrome red outfit shouted "I LOVE IT!" before requesting a track ID. But when asked whether or not this singer could have a future in the music industry, a different man said, "I don't know. She might do well on TikTok." Another man, meanwhile, was sure to mention that he most definitely could not make love to this song.

Finally, Dua showed her senior guests a picture of 'Dua Lipa, the pop star' in the hopes that they would then connect the dots. Reader, they did not. "That's terrible," one woman responded. "If I had a daughter, I wouldn't want her to go out in that," she said, referring to the singer's plaid bustier. Another man quite plainly offered, "It looks like she's trying too hard." Only one woman made the connection that she was talking to the pop star herself. It's the funniest thing you'll watch all week.