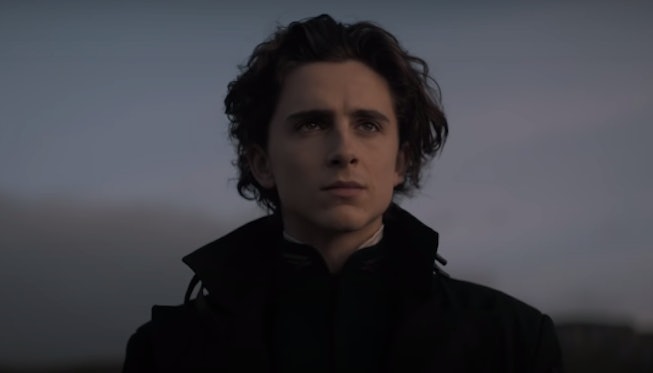 Let's get one thing clear. The brief moment in which Timothée Chalamet and Zendaya slowly lean in to each other for what will surely be a passionate make-out sequence would have been worth the price of admission to the first Dune trailer alone. And their lips don't ever even touch! And that all happens in the first seventeen seconds! Which is to say that, yes, the first Dune trailer, which was just released this afternoon, has me more than excited for the upcoming Denis Villeneuve film. (Eat your heart out, David Lynch!)

As is apparently the new norm for big Hollywood action films (I'm looking at you, Tenet), the trailer for Dune was first announced yesterday in a teaser for...the trailer. But as much as I dislike this new real-world enactment of a 30 Rock joke, the hype worked — many of us, including myself, spent the better part of our mornings sitting in front of our computers, impatiently refreshing the Twitter Movies feed until the trailer finally materialized today around 12:15 pm ET.

Thankfully, the trailer does a good job of laying out the basic tenets of what we can expect from this big-screen adaptation of the beloved 1965 Frank Herbert sci-fi novel. Here, we follow the Oscar-nominated Chalamet as Paul Atreides, the privileged, wealthy son of the powerful Duke Leto Atreides (played by Oscar Isaac — which means, yes, Oscar is Timmy's Daddy), as he journeys to a new land where he will oversee the extraction of an extremely valuable spice while also tapping into a newly-discovered set of special powers. Like many sci-fi and fantasy stories, Dune also features warring sets of "Houses," worlds that look nothing like our own, and supernatural powers. (Look no further than Timmy's line-reading of, "There's something happening to me. There's something awakening in my mind, I can't control it" or the way he simply responds "yes" when asked, "Do you often dream things that have happened just as you dreamed them?")

But this first trailer also offers prospective audiences a peek into a number of other exciting things to come from the film, including Timmy violently shouting after sticking his hand into a box filled with "pain," floating orbs in the sky, soldiers that can levitate in their fancy full-body uniforms, virtual reality-esque fight sequences, mysterious creatures rising from under the ground (and forming sandstorms in their midst), and, of course, my personal favorite: Jason Momoa saying, "Let's fight like demons."

In addition to the aforementioned Chalamet as Paul, Zendaya as his love interest Chani, Isaac as his father Duke Leto, and Momoa as swordmaster Duncan Idaho, Dune also stars Mission Impossible's Rebecca Ferguson as Paul's mother, Lady Jessica; Javier Bardem as leader of the Fremen people, Stilgar; Josh Brolin as Gurney Halleck, a fierce supporter of House Atreides; Dave Bautista as Glossu "Beast" Rabban; Stellan Skarsgård as head of House Harkonnen, Baron Vladimir Harkonnen; and Charlotte Rampling as Gaius Helen Mohiam, a skillful Truthsayer (a person who can determine whether someone is lying or telling the truth).