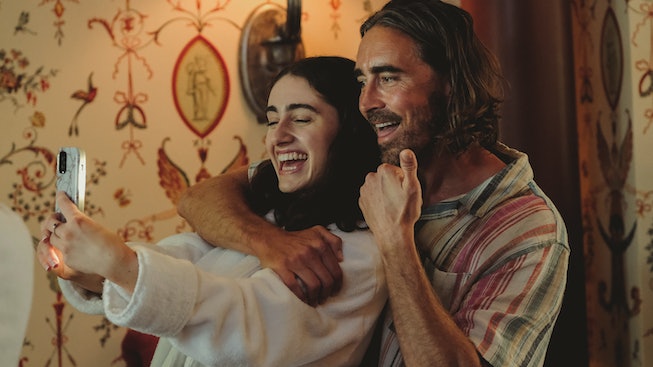 As a hurricane touches down on the ill-fated group of friends, portrayed expertly by Amandla Stenberg, Maria Bakalova, Myha'la Herrold, Chase Sui Wonders, Rachel Sennott, Lee Pace, and Pete Davidson, the group decides to play a childhood game that’s something like “Murder” or “Werewolf” (appropriately titled “Bodies Bodies Bodies”). Even as the characters begin to die mysteriously violent deaths, they continue to make cracks about podcasts, have petty arguments and turn on each other within seconds, betraying their own lack of loyalty and trust with one another, as well as the deep-rooted selfishness of youth. Even as the friends’ hysteria increases with each new death, there’s a sense of dry nihilism that speaks to the ennui with which we doomscroll on our phones as the world burns around us. By the time the film’s final ridiculous twist is revealed, the group is so far gone (and has done so much unnecessary damage to each other) that it’s too late to turn back.

The film’s director, the Dutch actress Halina Reijn, says the film’s undercurrents of social commentary were by design — and entirely the point. “This film I made, because I'm completely and utterly addicted to my phone,” Reijn told NYLON ahead of the Bodies Bodies Bodies premiere. “I'm just addicted to my screen, I'm addicted to all the social media and all the narcissism and all of that, that I'm just revolted by myself. I thought, I want to make a fun film that sort of is a comment on the time that we live in, and the way we communicate.”

She added: “We all know there's so much shit going on right now, but at the same time we're like, ‘Oh, well let's see who posted what today.’ In the face of war, in the face of abortion being banned. Of course my film is a very light comedy, but I wanted that dark undertone of making a cautionary tale about how we are glued to that and the sort of narcissism of our times.”

How did this project come to you?

I used to be an actress in the Netherlands, which is a very small country, of course, in Amsterdam. Mainly on stage and film — and I had a very devoted life to that. I was working with the director Ivo van Hove, who became insanely popular worldwide when he worked with David Bowie right before Bowie died. After that, his show started to sell so crazy, that we were constantly touring the world. And that life started to really take its toll.

I started to secretly fantasize a little bit about making my own things, instead of just being on the stage. I made my first film, which was Instinct, which was basically based on a true story about a female therapist falling in love with a rapist that she's treating. It was a very dark, very different film than Bodies, Bodies, Bodies. I made that with my best friend, Carice van Houten, who was an actress in Game of Thrones. We made a TV show together called Red Light, about sex work in Amsterdam, and people started to notice me a little bit, and I got agents calling me from America. That's how I met with A24, who I was, of course, as all of us, a big fan of. Somehow they're capable of making artistically super interesting films, but at the same time, know how to sell them to bigger audiences.

What did you think when you first read the Bodies script?

When they send me this script, and I was immediately intrigued, because I have a very tight friend group. I don't have children. My friends are my family. And they always like to play a game called Mafia or Werewolf, or we call it Murderer. And I hated that game, but I loved it and I also hated it because I always was afraid, I didn't really understand the rules, that I would, and make a mistake. These games are mind games, and they basically provoke sort of a psychological warfare, if you will. And within a friend group, that's super scary. You're basically trying to find out who's lying.

I was very intrigued by the script that dealt with the same game, but I did feel like I want to make it more my own, because it would be the first project that didn't come from my own brain. So I rewrote it with Sarah DeLappe, who's a theater writer from New York, an incredible young woman. And I really wanted to be funny, because I've played all those tragic roles.

What were some of the major changes that you made to the original script (by Kristen Roupenian)?

I made Instinct, my first film, because I'm attracted to bad boys. And I'm like, "Why?" This film I made because I'm completely and utterly addicted to my phone. I look at my phone all the time, I don't really look at what's really going on. I'm just addicted to my screen, I'm addicted to all the social media and all the narcissism and all of that, that I'm just revolted by myself. I thought, I want to make a fun film that sort of is a comment on the time that we live in and the way we communicate. We all know there's so much shit going on right now, but at the same time we're like, "Oh, well let's see who posted what today." In the face of war, in the face of abortion being banned. Of course my film is a very light comedy, but I wanted that dark undertone of making a cautionary tale about how we are glued to that and the sort of narcissism of our times.

The cast has such great chemistry. What was it like working with them?

The way I work is, we do very long takes — myself and my cameramen who I brought from the Netherlands, also. [The actors] need to be prepared so well, because we sort of approach it as a theater play, where you need to know all your lines and everybody needs to really go in. It's not very technical, the way we approach it. I was super convinced that I needed a great group of actors for this. And also, they have to make it believable that they have a history together, and that they're real friends and be this seductive, beautiful friend group that we all want to be part of.

Amandla Stenberg was the first to come on board, and she's a wonderful, super talented actress. But not only that, she's very smart and capable of being way more than that. She's an executive producer on this film. She also really co-created the music with me and was much more involved than just the acting. Then I always knew, Pete Davidson, I wanted for the guy, the young man. Because even in Europe, and way before Kim Kardashian, we are very aware of his work. I saw his films, and I loved him in those films, but I also thought, "They're making him so goofy.” I was more interested in his darker side, and this like, little bit this narcissism, and this darker masculinity that he can obviously act very well. And I love working with people that come maybe from different backgrounds, but have an ambition to be serious actors. So absolutely blissful to work with him.

And then, Maria Bakalova, she was Oscar nominated. She was in Borat, which is of course a crazy film when everybody thinks, "Oh, it's all improvisation." But she has classical training in theater, so that I loved. And then we just kept finding all these amazing people. Some people I just saw in audition takes, like Chase Sui Wonders, who is a lovely actress who just graduated from Harvard. They come from such different backgrounds, and I thought that was really great for the film. And somebody like Lee Pace, who's way older, much more my generation — who's a very accomplished actor on stage, but also he does these big American films. And I thought it would be so funny to have all these young people together and then this one older guy that Rachel Sennott's character just found on Tinder, and just brought him to the house without discussing that with her friends, and being an outsider trying to also belong to the young ones. But it's also like, "I have no clue what's going on." I loved his take on that in the film as well.

What was the vibe like on set? Did you all stay at the house it was filmed at?

We were incredibly relieved and happy when we found that house, because of course we wanted so much out of a house — all these different spaces we needed. There's literally an inside basketball court, which is so outrageous. For me, the house symbolizes the American dream gone wrong. It's very wealthy and decadent. And so when we found it, I was over the moon of happiness, because it would mean that we could all be there together. We slept really close to the house in a hotel, because it was also COVID, so we had to be in that bubble.

The actors didn’t know each other, so I knew it would be a great opportunity for them to spend time together. We rehearsed a lot beforehand and just stayed together in that little world, just like the movie itself, right? Because there is a big storm and they're all locked up in his house and they cannot leave. And the pressure cooker of that will result in very wild situations. So I thought it was great that we felt a little bit of that during filming. And there was actually a moment where suddenly we had to stop filming, and we were in the middle of a big group scene and they shut everything down and we actually had them go in to the basement because there was a hurricane approaching. And it was so good, because me especially coming from Amsterdam, a hurricane, that's to me is completely foreign. I love that I actually got to experience it, a little bit of real life on the set where we were actually trying to recreate that.

Did the cast play any “Murderer” games?

They really played the game. They of course had their own little roles without me and they played the game several times. They became very tight group and they still are. And now that we're promoting the movie of course, they're seeing each other again a lot. I think it really worked for the film that you really believed that they are a friend group. I'm very proud of that, how they did that.