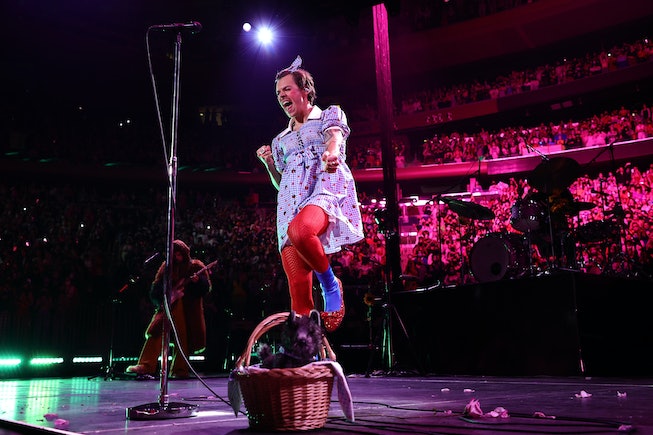 When I say “legends supporting legends,” I’m talking about Harry Styles paying homage to Britney Spears and Harry Styles paying homage to Britney Spears only. At last night’s Halloween-themed edition of his Love On Tour expedition — the last of five Madison Square Garden dates — the “Watermelon Sugar” singer took a second to honor the recently-freed Queen of Pop by performing a rocked-out cover of her In the Zone classic “Toxic.”

Performed as part of his four-song encore, Styles slotted the pop staple in between “Medicine,” an unreleased song he used to perform a lot in 2018, and his energetic single of a closer, “Kiwi.” Accompanied by live instrumentation from his backing band, Styles’ rendition felt unique; singing in his lower register helped turn the song into something entirely his own. In fact, in some parts, it felt downright spooky — a fitting tone to cap off his two-night “Harryween” run.

More importantly, the singer clearly had a fun time playing the song. In the opening moments, right as he transitions from “Medicine” to “Toxic,” you can see Harry break out into a bit of inspired choreo — even if only for a moment. The fans seemed to enjoy it just as much. Though this was Styles’ first time performing the song, his enthusiastic audience picked up almost immediately, wasting no time before joining in with the performer, matching the Brit word for word.

Whether future audiences will get the opportunity to hear Styles plow through this perennial classic is still unknown. Before now, the singer hadn’t made much of a habit of including covers in his setlist. Sure, he performed Judy Garland’s “Over the Rainbow” over the weekend, but it’s safe to assume that was just a one-time special to accompany his truly glorious Wizard of Oz Dorothy costume. With only ten more shows on his 40-date US tour, we’ll find out soon!