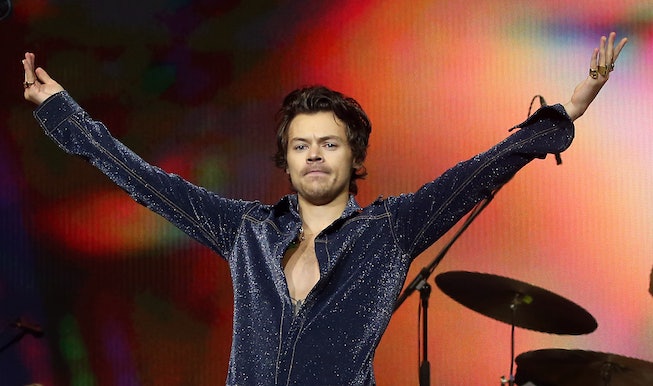 Well, it’s official. Harry Styles is taking some time off from cuddling with Olivia Wilde and shooting movies about queer cops to bless us in the way we’ve all been waiting for: embarking on a live tour and releasing new music. Over a year and a half after releasing his chart-topping sophomore album Fine Line (and one year after being forced to cancel its corresponding tour due to COVID-19), the former One Directioner is finally ready to hit the road again for an extensive US tour.

Starting at Las Vegas’ MGM Grand Garden Arena in September and concluding at The Forum in Los Angeles in November, Styles’ upcoming tour is currently slated for forty dates, with the “Watermelon Sugar” singer playing a new show almost every other day. (I’m exhausted just looking at the schedule.) Former Rilo Kiley bandleader Jenny Lewis is still slated as the tour’s opener, though Orville Peck and Madison Cunningham will take her spot for two of the singer’s five New York dates. (Yes, you read that right. Harry Styles is performing at New York’s Madison Square Garden five times.)

Styles made the announcement about his rescheduled Love On Tour on Instagram this afternoon, expressing his genuine elation to finally be reconnecting with his extremely patient fans. “I could not be more excited for these shows,” he noted in his Instagram caption. He also noted that these shows would follow venue-specific safety guidelines as “the well-being of my fans, band, and crew, is my top priority.”

Perhaps even more exciting, however, was Harry’s reveal that he was also gearing up to release new music. After apologizing to his other fans “in the UK and across the world” for not being able to tour outside the US just yet, Styles added a special announcement. “I will be sharing more news soon about shows across the globe, and new music,” he wrote. “I love you all so much. I’m very excited, and I can’t wait to see you.”

Of course, there’s no way to know what exactly this “new music” will consist of. Is Harry Styles readying an entire new album? (Fine Line came out an entire year and a half ago, after all, and with the pandemic, the performer has had more than enough time to record another chart-topper.) Or will he just bless us with a new one-off single? Only time will tell.