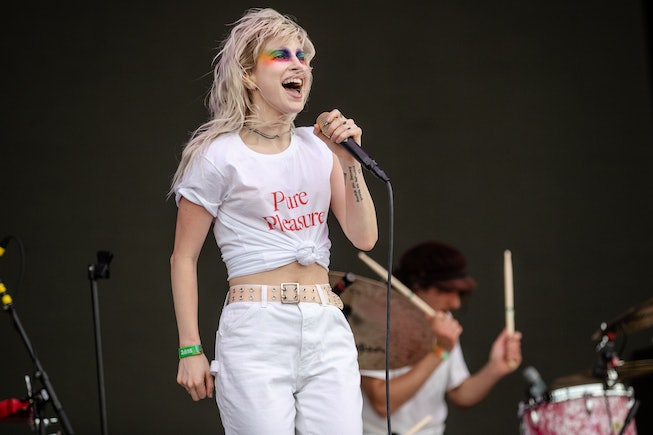 Hayley Williams is taking to the airwaves and diving into the rich history of emo music. The Paramore singer announced a new podcast, Everything Is Emo, as part of BBC Sounds’ Back to Back series, in which she’ll chronicle the history of the genre from its beginnings to its current day revival.

The first episode of the 20-part series is already available to listen to now. According to a description of the podcast, “Hayley starts with the songs and artists that influenced her and explains why she believes all music is emotional, plus she puts the Twilight soundtrack On Shuffle.”

In a statement about the project, Williams said:

“Not long ago, people started calling me a ‘veteran’ of my scene and of the music industry. It sounds so funny to me because most of the time I still feel like a fan. The serious truth is I have, in fact, grown up in this scene for the last two decades. I guess that’s a pretty long time. I’m really excited to have the opportunity to publicly nerd out about bands and songs that make my favorite subgenre feel like home to me. And while it will be fun to take some trips down memory lane, I’m just as excited, if not more, to play music from new artists I’m discovering all the time.

Everything is Emo is meant to feel like a conversation with other fans of the genre, young and (ahem) old. There’s going to be plenty of interaction, which I hope will feel somewhat reminiscent of the message boards and forums I used to frequent as a teenage scene kid.

More than anything, I hope music fans and artists alike will be psyched to hear a highly considered spectrum of ‘EMO’ in all its forms. And yeah, of course you’ll hear some Paramore.”

During each hour-long episode, Williams will delve into the music that shaped both her and the ‘90s, while also reminiscing on her time as the frontwoman of one of the most popular emo bands of all time.

Williams’ most recent album with Paramore was After Laughter (2017), and she’s since released solo projects Petals For Armor and FLOWERS for VASES/descansos. She’s clearly been thinking of her Paramore days, as she revealed in January that the group was back together in the studio working on new music. Earlier this month, she joined Billie Eilish on-stage during her headlining Coachella set to perform a duet of previously retired Paramore hit, “Misery Business.”